1200 Foods That Confuse and Amuse You My good friend Lenny Karpman, a cardiologist I worked with during my days as an emergency physician at Kaiser San Francisco, has written a delicious book. It is aptly titled Foods That Confuse and Amuse: 1200 Eclectic Names Demystified.

The book is the perfect reference for foodies who want to impress their friends with the breadth of their culinary knowledge. You know the type of person I am talking about, right? Its the one who would say, “Why yes, my friends, I know the perfect place in Boise to find the best Sawsawang Kamatis! [a salad from the Philippines that combines sweet tomato slices with sour green mango, ginger, and scallions]…I think you will find that it’s just heavenly.” I may have even done something like that myself.

And, even if you aren’t a foodie, think of the possibilities for a wedding anniversary dinner: “I bought us a fine bottle of Cats Pee on a Gooseberry Bush wine from New Zealand that should exactly complement the Geoducks [huge clams from the Pacific Northwest whose name is pronounced ‘Gooey Ducks’] that I picked up at the farmer’s market today.”

Or even a first date at a Dim Sum restaurant where the impressee can impress the hopefully impressed with an order of Peacock Claws [steamed chicken feet in fermented black bean sauce] and Pearl in the Palm [Quail Eggs and Duck Webs—yes, the webs in duck feet).

Some of my favorite foods that confuse and amuse

The exotic food names in this little gem of a book are organized alphabetically, ranging from Aass Bryggeri [Norway’s oldest brewery] to Zongzi [a pyramid-shaped dumpling made of sticky rice wrapped in bamboo or lotus leaves]. Each food comes with an amusing story, often from Lenny’s world travels with his wife Costa Rica Joan (one of my best friends for years).

Here’s a sampling of some of my favorites:

“In China’s coastal Shandong Province, the freshness of the seafood is paramount. Large live prawns are dropped into the hot oil of a wok. They squirt body juices out in a stream through the only opening in the otherwise intact exoskeleton. The liquid is not urine. Rather than acting as a turn-off because of its name, the description is a desirable statement of freshness.”

“The breast-shaped pastry originated in the monastery kitchens of Palermo, made its way to Catania, and then landed in Italian pastry shops in New York and everywhere else Italians wound up in this country. The nipples must have been very cute and a little shocking to kids. Saint Agatha was born in Catania in the third century and, according to the various versions of her story, rejected the advances of a Roman prefect, and he began to persecute her for her Christian faith. Among the many tortures, she underwent was having her breasts cut off. In art, she is usually depicted carrying them on a platter.” Robert Sietsema, the restaurant critic for the Village Voice went to dinner with a group of bold foodies for an organ meat feast at Northeast Taste Chinese Food in Flushing, Queens. the name that seems to have gotten the most attention was crispy colorectal. According to Sietsema, it turned out to have a ‘licorice spice that masked the skunky taste – proving that anise and anus go surprisingly well together.'”

Related content: Your Genes and Foods: The Science of Personalized Nutrition

“Don’t laugh at the name of these raisins- or dried fruit-dotted sweet scone-like griddle cakes from the north of England. Hinny is actually a regional term of endearment, at least so I have been told. From Newcastle to Northumberland, people pronounce honey as hinny. The batter is laden with lard and/or butter and sizzles audibly when it hits the hot griddle as if it is were singing. They are also called fatty cutties in neighboring Scotland.” A plateful of fat cuties known as Singing Hinnies Photo credit: Flicking the VS

Chicken Eye Jelly wins for the most exotic food name!

“My wife and I have been to China four times, but we ventured off the beaten tourist path only once [when we went] to Lijiang, the capital of the Naxi Kingdom in Yunnan…51 of China’s 55 ethnic minorities have communities in Yunnan. With so many different traditions and food products, it is very hard to separate specific culinary features of any group. But regionally, the four most memorable were wild mushroom dumplings, yak sweet cheese (though I am not a fan of yak butter, milk, or tea), cured ham, and an unappetizing-looking gray glutinous jelly called chicken eye jelly. No, it is not created from eyes of anything. The beans from which it is made look like a type of lentil. Their oval flat shape does look like the eye of a chicken. Strands of the firm jelly adorn many vegetables and pork dishes and assume the flavor of the cooking broth or sauce. Cubed, spiced similarly to adjacent Sichuan foods and deep-fried, they are crispy-coated luscious chewy flavor packets.” Chicken eye jelly is NOT from a chicken’s eye Photo credit: ChinaTour.com

“These critters burrow holes in ocean sands in Asia and end up as food. I saw them (gaebul) but didn’t try them in Korea where they go live from aquarium to cutting board to plate still wriggling. They are dipped in a soy-based sauce and are reputedly less chewy than wriggling octopus tentacles. I am told that they are mild tasting and sweet. In China (haichang) they are stir-fried. In Japan, they are called yumushi. In the Tsukiji fish market, I saw them for sale but never came across them in a restaurant. They have several names including penis fish. Indeed they look like gray uncircumcised small penises with a bulbous swelling at what I assume to the head end, with a central meatus that I assume is the mouth. Another name is innkeeper fish. It supposedly doesn’t reflect on the diminutive anatomy of the innkeeper, but rather attests to the fact that other small sea critters inhabit the holes in the sand made by these worms, like boarders in an inn.” 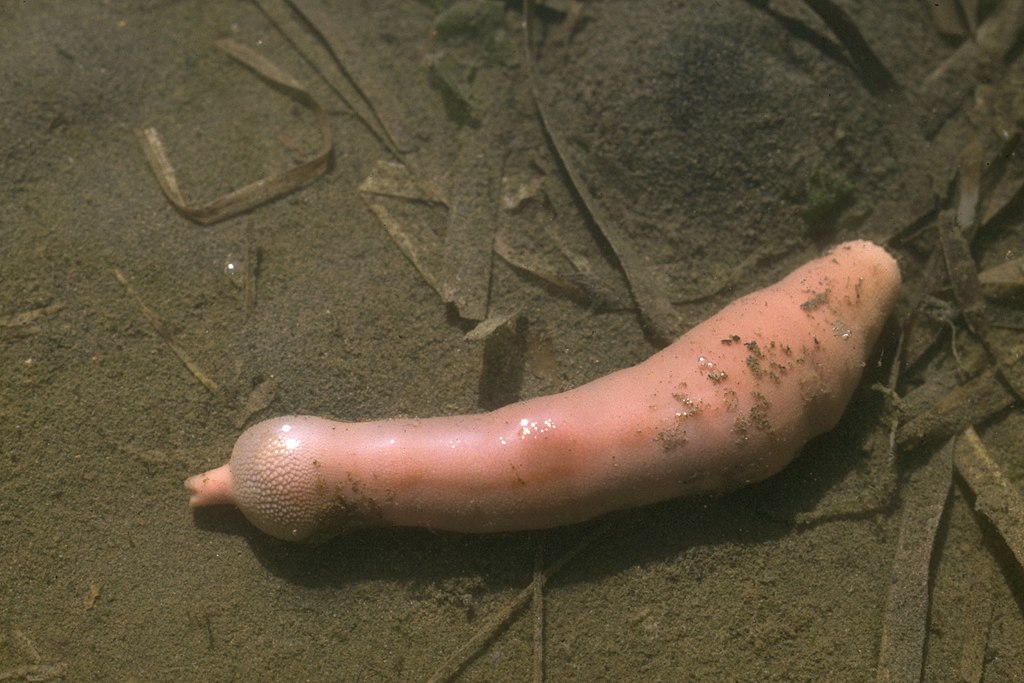 Close up of a Spoon Worm as found in nature This image was originally posted to Flickr by jkirkhart35 at https://www.flickr.com/photos/[email protected]/2295857848. It was reviewed on 30 January 2010 by FlickreviewR and was confirmed to be licensed under the terms of the Creative Commons Attribution 2.0 Generic license.

“We were in an incredible wild game camp in the Okavango Delta of Botswana sitting under a thatched roof rehydrating with cold beers, watching the sunset after a close encounter with a leopard on a nearby island earlier in the day. The couple who shared our space were newlyweds from Monaco. They were polyglots. When Martin asked our host what was on tap for dinner, he pointed at a three-legged covered cast iron pot sitting over a small fire and said, ‘classic seswaa.’ ‘C’est soir what?’ asked the bewildered Martin. Reminiscent of the Abbot and Costello routine ‘Who is on first base?’ it took them a while to understand each other. Chunks of beef on the bone simmered away for hours in a pot with salt water, pepper, and onions. When the meat began to fall off the bone, it was pounded into the shredded consistency of pulled pork or ropa vieja and served over cornmeal with sides of cooked pumpkin and a spinach-like cooked green called morogo. It turns out that seswaa is the national dish of Botswana and the three-legged pots are classic cooking vessels throughout southern Africa called potjies. They are descended from Dutch ovens adapted for the bush. Native dwellers away from cities cooked their game, goat, pork, or beef in them (potjiekos) for hours over small open fires in flavored water or beer.” Whether you enjoy learning about a Fart Bar in Poland (a chocolate candy bar whose name means good luck), a Longevity Bun in China, or a Handkäse mit Musik, this book is for you. The last one, by the way, is a hand-rolled soft cheese from the Frankfurt area of Germany that comes on a slice of hearty bread topped first with plenty of raw onions. The Musik in its name refers to the noisy flatulence that follows the ingestion of the said substance.

Foods That Amuse and Confuse: 1200 Eclectic Names Demystified is self-published and available Amazon (link is an affiliate link – we get a small commission if you purchase using it). It’s a perfect gift for anyone who travels (and now can’t) and anyone who loves food!