My Doctor Diagnosed Me With Thin White Female Syndrome 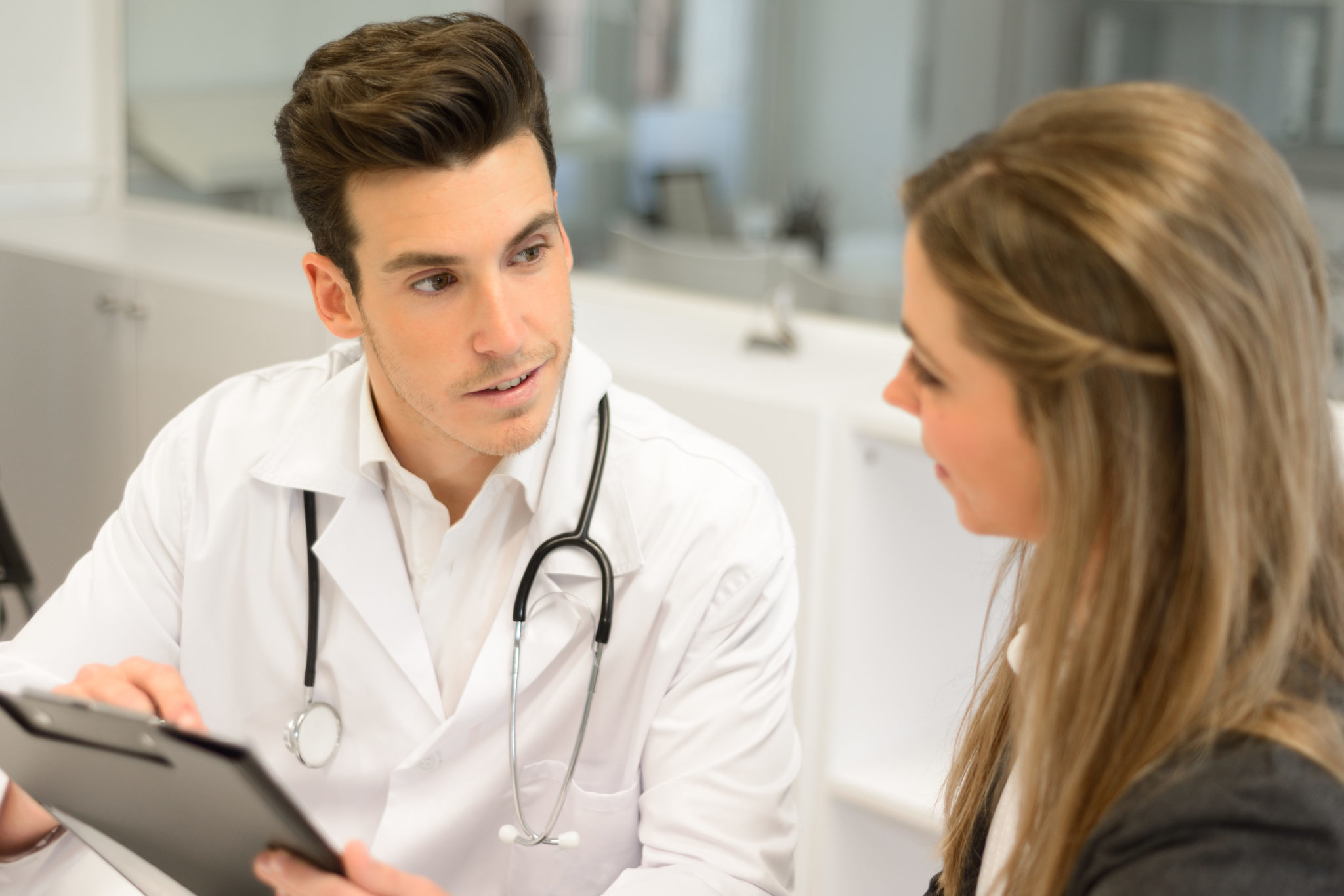 Shortness of breath. I felt it for the first time while running on June 21st, 2011. I had just been rejected from my first choice medical school a few days prior—post-interview, the worst. I took it as a personal affront. They didn’t like me, my personality.

I wondered how I had come off—fake, phony, artificially enthusiastic maybe. Maybe they didn’t think I was up to their caliber. But either way, I felt crushed, useless, as if there was a rock stuck in my throat. And now, my whole life would have to change.

I stumbled home and told Brian that I couldn’t breathe and to call 911.

“Why?” he asked. “You seem fine, you’re talking okay, and you just went for a run. I think you just should rest on the couch.”

I scowled at him and accepted a glass of water. The feeling didn’t subside. I once again broached the idea of the emergency room. He suggested waiting a little longer.

I picked at my sushi without really eating anything and thought obsessively about my breathing. When Brian wasn’t looking, I broke into my stash of airplane Xanax and took a half. The feeling subsided a little.

The shortness of breath returned

The next day, I went to work. One of my favorite patients was actively dying. I cried—I never cry. Warm tears ran down my cheeks as I watched the nurses change the gown she had just defecated all over.

My breath caught in my throat as I saw her daughter hold her corpse of a mother and collapse helplessly into the bed beside her. I couldn’t believe it.

I’ve spent my days watching patients battle end-stage lung cancer and ultimately die. Today, however, this felt insurmountable. I shielded my red eyes from the attending as I pretended to grab a lab kit from the closet. The shortness of breath returned.

Two weeks went by, and it still hadn’t gone away. The feeling was more transient, but I still felt like I couldn’t get to the top of my inhalation. Breathing deeply felt like a chore.

My chest had started to hurt. I thought of all the possible reasons why:

I wasn’t coughing so it didn’t feel like bronchitis or pneumonia. I had never been asthmatic and heard no wheezing. I was too embarrassed to solicit the advice of one of my attendings. And by now Brian was getting fed up with me trolling WebMD every night before bed.

Other stories by medical students:<
A Mother’s Howl: A Medical Students Lesson on Giving Bad News
How I Learned to Give Permission to Myself
My Grandparents Agonizing Deaths Taught Me to Be a Better Doctor

A state of panic

Later that week, I had a particularly difficult time breathing when walking home from work. So, I tearfully called up my doctor (again, what was with all of this crying?!) and told him my symptoms.

He agreed to see me immediately. I arrived at his office and he examined me,. He offered to work me up for my own peace of mind but noted that he didn’t anticipate anything was wrong. An electrocardiogram, pulmonary function test, and a chest x-ray later, he sat me down in his office

“You appear to be in a state of panic,” he said, handing me a prescription for Ativan. “You might want to figure out why and relax or something. There’s nothing wrong with your heart or lungs. You’ve got, like, Thin White Female Syndrome.”

He gave me his best “Of Course, You Don’t” look.

“You’re having an extended panic attack, but you’re physically healthy. Take some Ativan and try to calm down. Call me if the breathing gets worse.”

“Okay.” He was an idiot, but I was somewhat comforted by my test results. I left the office and threw the Ativan prescription in the nearest garbage can.

This can’t be anxiety

My last day of work was fast approaching. Brian and I had been planning a trip to Italy for a few weeks before I started medical school. On the second day of the trip, Brian proposed. Definitely no shortness of breath that night.

But to my dismay, it returned a week later, as we were hiking up the scenic trails in Cinque Terre, overlooking the pristine waters of the Ligurian Sea. This can’t be anxiety, I thought.

What could I possibly be anxious about? I’m engaged to an amazing guy. I’m vacationing in Italy and literally staring at the calming blue water. All my hard work finally paid off and despite some painful rejections, I’m going to a wonderful medical school. Life is good. This is not anxiety.

Questions bounced around my mind. Could whatever it is wait another week until we got back to New York? What kind of medical care do they have in Italy? Could I afford it if I needed it? Do the doctors speak English?

What if I go to the emergency department and nothing is wrong? I would ruin our perfect trip. What if Brian gets mad at me and we have a huge fight? I move down to DC in a mere few days. What if we don’t work it out before then? Will he not want to marry me anymore?

I survived the remainder of the trip and then moving day arrived. I packed up and left everything in New York including my family, my friends, Brian, and our dog.

I struggled to breathe as I drove through Maryland on I-95. I chastised myself for not being mature enough to handle this.

At orientation, everyone seemed so happy and eager to get to know each other. I put on a smile and a brave face during the day. But I went home at night and hyperventilated.

Damn, I thought. I’m either anxious or dying. And with the daunting task of medical school ahead of me, I knew I either needed to find a way to calm down or drop out and enjoy whatever short time I had left on earth.

The next logical step in figuring this out was a consult at student health. At my appointment, I complained of my breathing issues but also admitted to my initial panic attack in June.

The doctor couldn’t have been nicer or gentler, but once again dismissed me as an “anxious female”. He handed me a prescription, this time Klonopin. I stopped him as he was leaving the exam room.

Let’s say this is anxiety

He forced a smile. I ignored this and continued.

“I’ve never had anxiety before. I don’t know where this came from or how to deal with it. There must be some way, though, other than drugs. Maybe it will just go away as I settle into school and get adjusted.”

He sighed. “It depends on how much the symptoms bother you. If you’re having trouble breathing on a daily basis, you can try some exercises. Or we can refer you to the counseling center. But if it’s interfering with your studies, I would suggest trying the drugs in conjunction with that.”

I nodded. I hadn’t even thought about this interfering with “the studies” that had barely begun. I took the prescription and thanked him, telling him I’d let him know what I decided. He mumbled a “call if you want” before closing the door.

I considered all of my options

I considered all of my options as I walked home to my tiny, empty house. I thought of what I had left behind in New York:

I realized I had approached this transition into medical school in the entirely wrong way.

I had spent so much time convincing myself that I was independent, strong, destined to be a physician, and mature enough to be in a separate city all by myself. However, I never let myself admit that this transition would be hard and something I would have to wrestle with before it became comfortable.

Anxiety, it seems, is an animal no less complex than the mind itself. We must know, as physicians, that while our knowledge is powerful, it is far less so without an understanding of what it means to be a patient.

During this time, everyone labeled me as a classic, anxious female. The whirlwind of thoughts and emotions made no sense in my head and had caused me endless hours of misery. They were, just like that, bracketed into a supposedly simple category and given a name.

And although my episode was situational and acute, I won’t forget the awful feeling that medical science had provided a completely inadequate definition for what I was going through.

Am I going to be a bad doctor?

I remember sitting up the night after the second exam of the year with a friend I had met during orientation. Neither of us felt like trekking out to the post-exam party, so we decided to do the super cool thing and drink wine by ourselves while watching reality TV.

A few drinks in, I told her about this whole experience. I confided that I didn’t really know what this anxiety episode meant for my career as a physician.

There were so many things coming up—more transitions, life-altering exams, competitive classmates—I had never before doubted that I could handle it. But now, who knows? Was I subject to a panic attack at any moment? Would this make me a bad doctor?

“Au contraire, my friend,” she said. “This is going to make you a much, much better doctor.”

I asked her to elaborate.

“Well, I’m just guessing,” she said, “but I’m pretty sure you’re never going to diagnose anyone as a ‘Thin White Female’.”

This story was initially written for a course the author was taking called “Reflective Essay: Writing Your Experience.” It is one of the most popular electives at Georgetown University School of Medicine where the author is a medical student.

It was developed and is taught by an adjunct faculty member, Margaret Cary, MD, MBA, MBA, PCC. In addition to being a writer and educator, Dr. Cary is a leadership development coach, trainer, and contributor to TDWI.

Samantha Kass Newman, M.D., graduated from Georgetown University with a degree in Psychology and Georgetown School of Medicine in 2015. She started her medical education as a research assistant at Memorial Sloan Kettering Cancer Center in New York City.

Dr. Newman is presently at Icahn School of Medicine at Mount Sinai in New York City as an Endocrinology Fellow.

In her (minimal) free time, she enjoys spending time with her husband Brian, their dog, and their young son.