Can Facebook Be Trusted To Decide What We Should See? 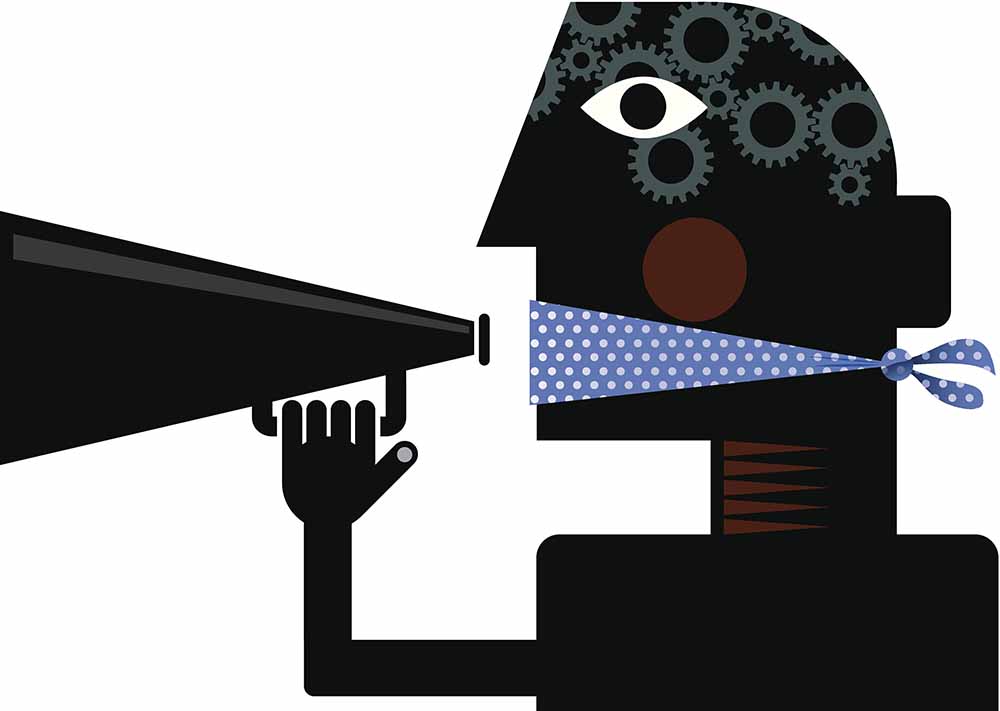 The challenges Facebook faces are not just how to prevent future violations of data privacy, but also how to prevent bad actors from hacking our brains via fake news stories that vulnerable individuals come to believe as The Truth. As Mark Zuckerberg stated in his April 10, 2018 testimony before the Senate’s Commerce and Judiciary committees,

“….we didn’t do enough to prevent these tools from being used for harm, as well. And that goes for fake news, for foreign interference in elections, and hate speech, as well as developers and data privacy.”

In fact, Facebook had already announced, in August 2017. that it was expanding its fight against fake news to include business listings saying,

I am definitely in favor of reducing the influence of fake news on the general public, but I am concerned about exactly how this is going being implemented. Zuckerberg stated in his Senate testimony that increasingly artificial intelligence (AI) algorithms are being used to screen posts and ads to see if they meet Facebook’s criteria for publication. That’s fine, automation with AI is the future. However, the insertion AI into the process of determining acceptability for publication makes the process even more opaque than it already is and it is likely to make Facebook a uniquely powerful organization that has undue influence over the viewing habits of billions of people on earth.

Transparency is a hallmark of free speech

We need to open up the process of content curation not only via regulation but also by allowing consumers to play a role in determining what they should or should not be able to see. We need to know exactly how Facebook is going to decide if a story is fake and whether a company should be banned from their site. Here are some of the questions that need to be addressed:

Here’s what happened to me

To show you how this can all go south, let me tell you about my personal experience with Facebook denying ads (also known as boosts) over the last several years.

Your photo is “shocking”

The first time one of our post boosts—actually the accompanying picture—got denied by Facebook, I was surprised. In August 2016, we published an article on reducing malpractice risk related to vaccinations on The Doctor Weighs In. It’s titled, Boost Patient Safety: How to Reduce Risks with Vaccinations. Each of our stories is accompanied by a featured photo, usually one that we purchase from one of the commercial stock photo companies. Here’s the photo we used for this story: We post a lot of our stories on TDWI’s social media channels, including Facebook. As we do with some of our Facebook posts, we decided to pay a small amount of money to “boost” this story in order to reach a broader audience. Shortly after we submitted the request to boost to Facebook, we got denied, presumably by the algorithm in use at the time. When we submitted a written appeal, here is what they said:

Your photo is “shocking, sensational, or overly violent”

The baby isn’t even crying! What is shocking about a child getting an immunization??? Of course, the post attracted the anti-vaccination crowd who left comments that reflected their opinions. Perhaps, someone complained about the photo or, perhaps, the person who handled our boost request is against vaccinations as well. That being said, I wonder if there really are legitimate grounds to censor an ad for an article about vaccination safety because it includes a photo of a kid getting a shot? We switched out the photo and the boost got approved (see below): Is it really a taboo to talk about burning fat?

The following month, Facebook again denied our request to boost a post. We are trying something new, making short videos out of the key findings from some of our articles. The first one we made was based on Dov Michaeli, MD, Ph.D.’s very popular post on when is the best time to exercise. It is titled, Exercise Before Breakfast to Boost Its Benefit on Weight. The story explained, from a scientific point of view, how we burn calories with exercise and concluded that exercising before breakfast can result in,

“….preferential utilization of fat as a source of fuel”

The short video captured the most important points of the article. We posted it with the comment:

“Trying to burn fat? Mornings may be the best time to sweat it out.”

When we tried to boost the video, we were again denied. This time we were shocked. What on earth could be the matter with this one??? When we wrote to Facebook to find out why this one was denied, here is what Robin from the Facebook ads team said: We wrote back several times to no avail. They closed the ticket and quit communicating—case closed: Here are some more of our stories rejected by Facebook—added on the same day that Mark Zuckerberg was quoted as saying, “…I believe we must be extremely cautious about becoming arbiters of truth ourselves.”

This was a story on psoriasis written by the President-emeritus of the American Academy of Dermatology and Chair-emeritus of the National Psoriasis Foundation Medical Board. And this one, titled “Got Knee Problems? Help May Be Up Your Nose,” was about an exciting innovation in the treatment of osteoarthritis (remember, we are boosting our story to get more readers, not selling a product and certainly not trying to “degrade people”): Note, they also rejected the picture which shows a red knee because it would make people feel bad about themselves…they even asked us why not show a person running or riding a bike? They have got to be kidding. Hey, Pricilla Chan, you need to do an intervention.

Weighing scales are not allowed

In August 2017, we tried to boost a fun story about calories we forget to count because they are in condiments, instead of the main course. We were denied again. Here’s why: Not allowed to talk about pain?

The Doctor Weighs In is a medical news site. We write about health topics that affect our readers. One such topic is the common affliction of pain. Here was our first attempt to boost a story about how to prepare for a visit with your doctor to evaluate a painful condition. Risque, no?

We tried switching the picture to one that seemed tamer, but no luck: 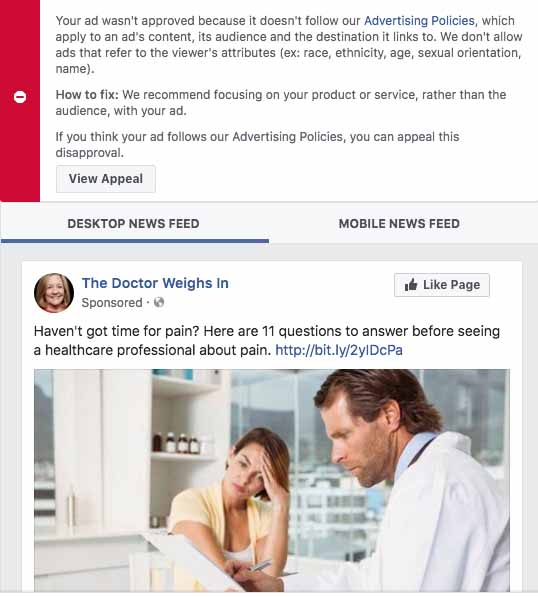 We gave up on getting this valuable story that could have helped many people boosted to a broader audience. And, since that time, we have become extremely cautious about what we try to boost – self-censoring to spare us the time and trouble of getting rejected by Mother FB!

We are not the only ones

I realize that my examples are not nearly as egregious as when Facebook censored an iconic picture from the Vietnam war because it showed a nude child. The child was nude because she had had her clothes burned off by napalm and she was running down a road crying—that is hardly pornography.

I am sure there are many more examples out there. It is important that they are exposed so that Facebook can use this information to inform their algorithms going forward and put into place an appeal process that is substantially better than what we have experienced over the last few years. This isn’t pointing fingers at Facebook, it is about providing them with valuable feedback so they can get better.

Should we be worried? You bet!

Why I am so worried about this is that Facebook is GLOBAL BIG MEDIA. This is where billions of people are getting their news. It is one thing to have algorithms that screen for things like childhood nudity. It is quite another when you act on those algorithms and then try to justify the resulting censorship by using nonsense like what they sent to us.

This is more than a slippery slope; it feels like they have crossed an important line in terms of free speech. Yeah, I know, we were trying to buy boosts from Facebook so they only prevented us from reaching a larger audience. They didn’t actually take our posts down. But nevertheless, it feels like the beginning of something very very big and very very bad, particularly now that they have acknowledged that they need to take responsibility for weeding out fake news and hateful content.