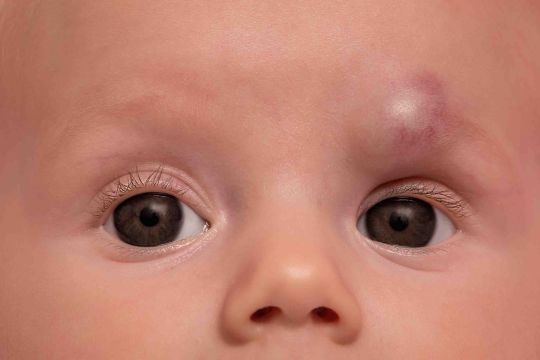 Based on an average of 4 million live births per year in the United States, that equates to 400,000 babies born with a vascular birthmark. Of these, 90% will go away, requiring no intervention. The remaining 10%, or 40,000, will have a vascular birthmark so significant it will necessitate a referral from their primary care doctor to a vascular birthmarks specialist. These cases are the primary focus of the Vascular Birthmarks Foundation (VBF).

Early diagnosis and treatment is essential

The need to focus on early diagnosis and early treatment is rooted in science. Current research indicates that the sooner you start treating a vascular birthmark, the better the outcome; not only medically, but also psychologically. There are also repercussions due to the psychosocial impact of mothers of babies with vascular birthmarks of the face. One study concluded over 75% of the mothers studied had symptoms of PTSD. But first, let’s focus on the child.

Prior to the 1980s, there were few options for treating a vascular birthmark. Couple this with the fact that 90% eventually resolve, it is no wonder the benign neglect philosophy has persisted. Based on numbers alone, most would agree that if 90% resolve, treatment should not be an urgent matter. However, for the remaining 10% of patients and their families, it is an emergent and often pressing issue.

When a mother has to spend every day dealing with medical concerns over a facial disfigurement, it will not only interfere with an already busy life of a being a parent to an infant, it will also interfere with the entire family system. Daily routines focus on wandering from medical expert to medical expert in order to find someone who will treat the lesion. Parents miss the first smile because they are focused on the rude comments from strangers and even friends who question why the lesion is there. Life is anything but the normal life of a new parent. Early treatment is critical to prevent psychosocial damage to the entire family system as well as to prevent disfigurement.

Laser experts conclude that treating an infant with a port wine stain as early as a few weeks old will have a better opportunity for clearance. Also, the infant will not remember the traumatic treatment sessions. Infants who undergo surgery, before the age of two, will not remember the surgery or living with the disfigurement.

You may ask, “What’s the problem then, treat them early?” Not so easy. First, primary care doctors have not been adequately educated to treat or refer infants. Parents who contact the VBF are often dealing with an older infant who has a large, disfiguring, ulcerating, and/or problematic hemangioma or a port wine stain that will become more and more difficult to treat the longer you wait. Second, insurance companies continue to deny the coverage of treating these lesions. They deny the treatment of a port wine stain in an infant at the rate of 60% to 70%, and denials for surgery for Infantile Hemangiomas are often at the rate of 50%.

Insurance companies deem these laser and surgical procedures to be “cosmetic, elective, and not a medical necessity”, but they are anything but that. These treatments are “restorative” and “reconstructive” and have nothing to do with cosmetics. Port wine stains are progressive lesions that never resolve. They can thicken, develop cobbling, and impair vital structures. Hemangiomas can be disfiguring, ulcerative, painful, problematic, and even life threatening.

Insurance companies that cover early treatment will actually be saving money in the long run as older port wine stains and hemangiomas left untreated will require more surgeries and laser treatments than lesions treated early in infancy. Early treatment, therefore, is a win/win/win. The baby wins, the family wins, and the insurance company wins.

The Vascular Birthmarks Foundation is calling on all primary care physicians in the country and around the world to refer infants at the baby’s four-week appointment to a vascular birthmarks specialist if a vascular birthmark is still present, does not appear to be resolving, and has the potential to become disfiguring or problematic. We also call on every insurance company to reexamine their policy on denying the treatment of infants with vascular birthmarks and approve early intervention.

Early diagnosis and early treatment will prevent needless psychosocial trauma to the family system, problematic disfiguring lesions, and pain to the infant. VBF will continue to fight for early intervention until it is no longer a problem.

To coincide with our new early diagnosis and early treatment outreach, the VBF has numerous educational outreaches planned, for example:

Since its inception in 1994, the Vascular Birthmarks Foundation (VBF) has focused on combating the outdated philosophy of “leave it alone” for treating an infant diagnosed with a vascular birthmark. For more information, go to www.birthmark.org.

You can find other interesting dermatology stories HERE.

Linda Rozell-Shannon is the President and Founder of the Vascular Birthmarks Foundation (VBF), the leading not for profit in the world for children and adults affected by a vascular birthmark, anomaly, or syndrome. VBF was founded in 1994, when Linda’s daughter Christine was born and subsequently diagnosed with a hemangioma. There was no internet at the time for everyday use. There was no book on the subject for parents. Physicians were not trained in medical school to treat these lesions.

In 1997, Linda became the co-author of the only book for parents on the subject of Vascular Birthmarks, entitled: Birthmarks: A Guides to Hemangiomas and Vascular Malformations. Since then, she has authored or co-authored over 12 medical journals, 3 textbook chapters, and has presented at over 20 conferences worldwide on the subject of vascular birthmarks. She is an avid public speaker concerning this topic and advocates for parents and lobbies insurance companies to cover treatment.

Today, Dr. Linda (as she is referred) is considered the leading lay expert in the world concerning vascular birthmarks and anomalies.