The Real Benefits of Women’s Resistance in an Uncertain Time 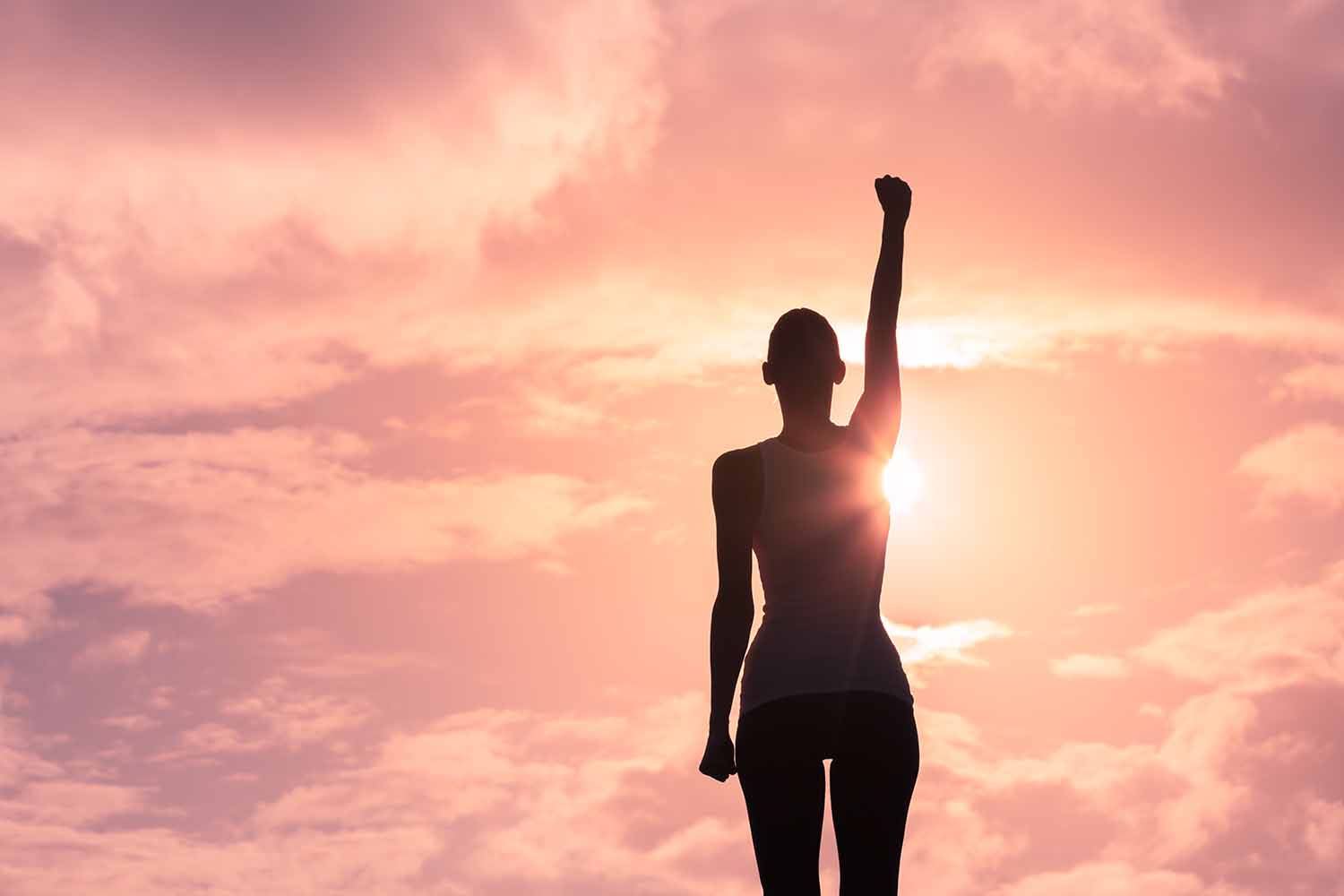 Women of the American Resistance is about how to wake up on this dark morning in our country’s political life and take the future of our democracy back along with our own sense of well-being and purpose.

If you feel daily buffeted by a blizzard of news bites and a thicket of tweets, if you wonder what to do or if you feel helpless, this book is for you.

If you’ve been puzzling over where to turn, how to start, what to do, how to take effective action, what would fit for you, in these politically intense times, this is the book for you. If you’ve looked at the political scene and wondered whether you’ve wandered somehow into a strange Mad Hatter’s tea party or an Orwellian novel and feel trapped, read this.

This book is scary, thrilling, and energizing—just like our times. Vividly written, efficiently organized in short but well-researched and pithy sections, this is a book for everyone who needs both facts and inspiration to get themselves started or keep themselves going in these chaotic, often dispiriting times.

The book covers a broad territory of various issues and historical precedents with verve and clarity. And, it’s funny, to boot! Smart! And emotionally sound—because humor is part of what keeps us going in times of trouble and crisis. The book is lively and enlivening, despite the fact that McCann is honest about the many difficult, even daunting, tasks we face. The humor, the punch, and muscle of the writing will keep you reading. Enlarge your store of ideas. And remind you of what we all need right now to make our futures livable (and enjoyable, too): working together.

At one point, McCann talks about kitchen-table gatherings and how supportive they are; reading this book is a bit like getting together with a good friend—or more than one, sitting down at a table and beginning to feel, because of the conversation, the shared energy, the laughter, and the joint intention that we’re becoming part of a community on the move, that with these friends on board, we’re ready to move the world. Ready to pick up our corner of the sky.

Most of all, this book is an essential guidebook to activism, to well-being in a trying world, to the art and practice of becoming part of the solution, to the pleasures and comforts of community, and to getting on the move.

The health benefits of activism

I am a writer and retired MFT (Marriage Family Therapist) and Certified Psychodramatist. It is widely known and written about in psychology and sociology that connection to a community, membership in groups, and certain forms of activism contribute to emotional health and mitigate against depression. The positive psychologist Mihaly Csikszentmihalyi says, “…no trait is more useful, more essential for survival, and more likely to improve the quality of life than the ability to transform adversity into an enjoyable challenge.”1

Cooperative groups solve a wide variety of problems, from the numerical to the social, better than even the most intelligent and creative individuals working alone.2,3 Further, research has shown that both volunteerism and activism have beneficial effects on well-being and emotional balance.

“Going on marches, signing petitions, staging rallies and other political activism could actually improve your health and general well-being.”4

Activism and volunteering have somewhat different effects, according to Megan Glister, but both increase an individual’s sense of belonging and forge community ties that support individual and group strength and purpose.5 Many of the outstanding activists of the world—Thich Nat Hahn, for instance—have written on the maintenance of balance and the link between happiness or well-being and an activist life, where the sense of the importance of the individual’s relations to others and to the world becomes daily and natural.6

We all conceive of ourselves in particular ways. How you use your own concept of who you are in the world, how you grow and change to make the most of your own particular nature and attributes, is an indicator both of the ability to meet developmental challenges and of the ability to survive, even thrive, in a world that, despite our American predilection for romantic thought, can be a rough place.

Constructive, collaborative, and positive psychologies concentrate on bringing out an individual’s assets and resources to solve presenting problems. This aspect of the use of self, the mining and use of your own resources (and I saw this again and again in my 35 years of practice as a therapist), helps people to be resourceful and successful in their own ways in a world that is now—and perhaps always has been—difficult to negotiate. So finding a way to be active on the side you want—you really want—to win is likely to, to put it simply, make you feel much better.

It’s an old idea, but it has stayed evergreen: Even Aristotle says that happiness resides in virtuous activity. Though he may not have been thinking that the activity would be resisting a guy with dyed yellow hair and a red cap, and he knew nothing about positive psychology, he was pointing right at the target.

Related Content: The Problem with the Way Women Speak

The variety and creativity of activism

McCann highlights that we need the kind of energetic support and vigor that supports local—and maybe even global—change. Karen has recorded interviews with women all over the U.S. doing inspiring work. She’s literally done the legwork. She tells vivid stories; she has talked to the people whose stories they are. It’s personal and real. She knows it’s different strokes for different folks, so her descriptions and suggestions cover a wide variety of resistance methods.

She investigates tyranny and its practices. One of her sections details movements all over the world and across recent history in which group actions, even group actions like singing forbidden songs, have brought down oppressive regimes. She discusses the issues and the grassroots advocacy going on in many areas of our national life (i.e., racism, civil rights, the experiences of non-white and non-Christian folk, the work of LGBTQ and disabled communities, women’s rights, workers’ rights, the environment and climate change) as well as the practical and operative mechanics of making change happen (i.e., raising money, gathering advocates, methods, including peaceful protest, the ABC’s of action).

Apparently, the tipping point for change comes at some moment where enough of us (and there is an actual percentage) stand up and make noise, where enough of us have diversified into all kinds of ways and byways so that a shift, something new, begins to happen. Karen gives example after example where these doors to change are open. It’s very heartening.

Another way this book is important to me is its emphasis on the creativity of activism. Throughout history, artists have been seminal voices in making important cultural and political change happen. Although Thoreau secluded himself at Walden Pond, he was also an abolitionist who went to jail for refusal to pay a poll tax that supported the extension of slavery into new territories, and his tract on Walden Pond and on living close to nature has become one of the progenitors of the movement to protect our environment.

As an artist and writer, I believe that creativity is an essential ingredient for effective change in individuals, and for societies. Art, like science, is an exploration, a path of discovery. Art is the soul of successful activism. Karen’s book has plenty of artfulness. The writing is fresh, muscular, witty. She includes links to her blogs, which have many wonderful visuals. The format is smart, inventive, approachable, and highly useful—you can find what you need to know quickly, and there are many roadways toward action to take, with excellent signage.

Art can be a warning and a celebration

Art can be a warning (think Orwell, 1984, or Margaret Atwood, The Handmaid’s Tale) and a celebration (the poems of Gerard Manley Hopkins or Mary Oliver) or both (let’s say Song of Solomon by Toni Morrison or Emily Dickinson‘s vast trove of poems). And art, as a historical record, reminds us and keeps the erasures and hypocrisies of political life from being effective (Elena Ferrante’s Neapolitan trilogy, any book by James Baldwin, Ta-Nehisi Coates, Zadie Smith).

Obviously, these are only a few examples of a vast store. If you’re looking for inspiration, it’s there—and that’s another reason Karen’s book is so good. Her own broad knowledge of literature and history, her many travels and vivid allusions to artists, thinkers, writers, activists, street artists, people whose own lives are, in themselves, statements of artistic and creative exploration (check out the Museum of Propaganda in San Rafael, just one example of so many!) are a testament to the interweaving of creativity and action for awakening and positive change.

It’s a book about life, liberty, and the pursuit of happiness

Women of the American Resistance is about life, liberty, and the pursuit of happiness (now where have I heard that phrase?), about what we women, whoever we are, can do to make our world better and safer and more democratic—this world, the one so many of us feel is on the cusp of changes we must make our own.

Being a woman and challenging the status quo has always been a formidable task. Holding up the world (which means doing what needs to be done, whether it’s laundry or leading marches) while changing it requires fortitude—which, it seems, given what Karen has unearthed about our many successes in the past, we have! We are the ones we’ve been waiting for, as Karen McCann says.

Karen’s primer on how and where and what—which somehow manages to be both exhaustive and un-boring at the same time—will make us stronger, savvier, and more efficient in doing what needs to be done. Get this book. Read it. Tell others about it. Don’t wait. It’s a blueprint we all need.

Here’s what the great 18th century activist for the equality of women, Mary Wollstonecraft, said:

“The beginning is always today.”

Tobey Hiller is a Marriage Family Child Therapist, a Certified Psychodramatist, and a writer. She taught Psychodrama at Antioch University in San Francisco and forms of collaborative and brief therapies at JFK University in Orinda, CA. She was the Psychodramatist at Mt. Zion Hospital for some years and worked as a therapist in a partial hospitalization program in Richmond, CA. She maintained a private practice in Oakland, CA for 35 years and provided consultation on team-building and conflict resolution to many groups such as medical groups, alcohol treatment programs, advocacy organizations, and group homes. Check out some of her publications.