What You Need to Know About Snoring and Jaw Development 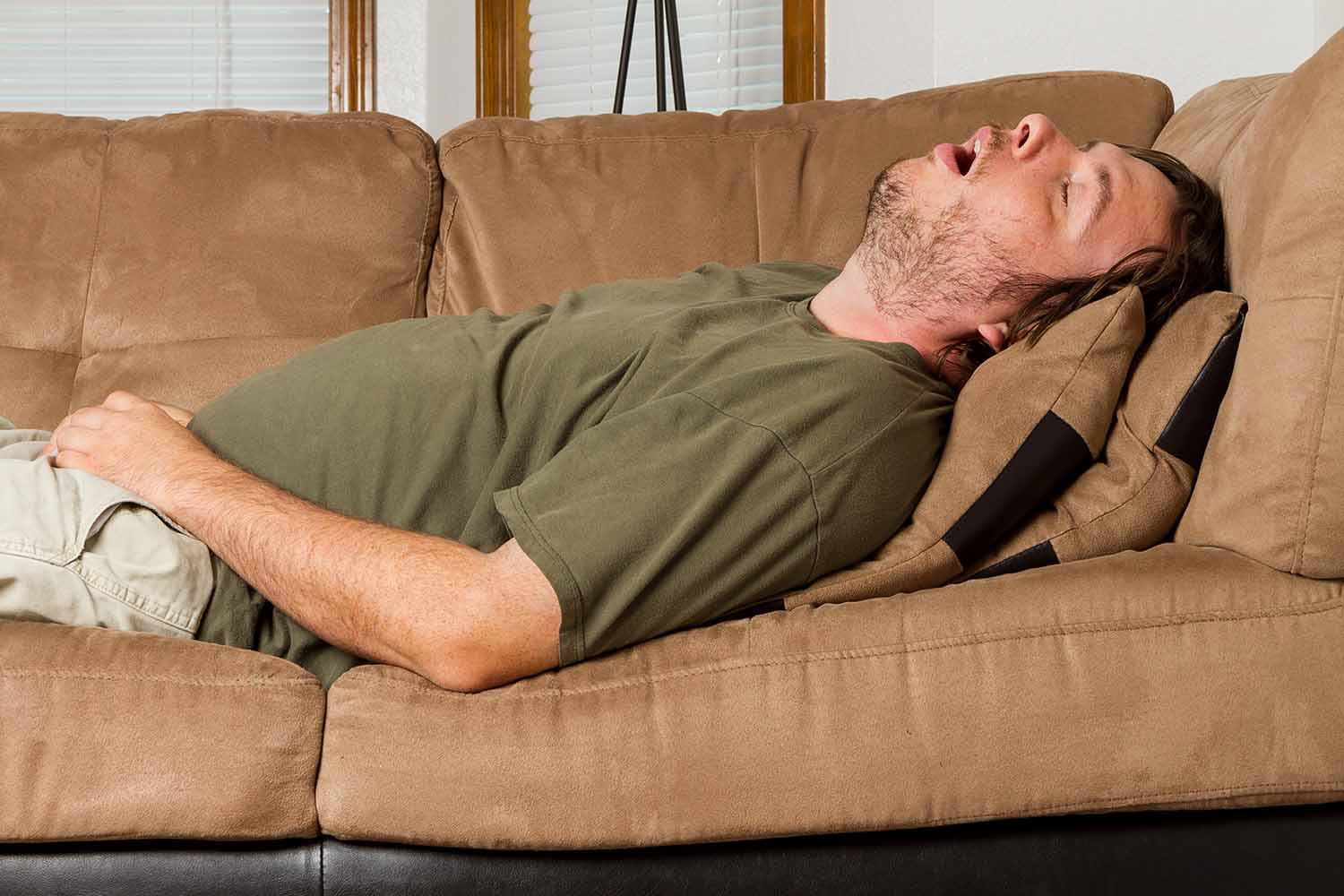 No longer just a nuisance, snoring is actually a serious public health problem hiding in plain sight. In fact, it’s one of many symptoms of a cryptic epidemic that is just being discovered by the medical community.[1]

The most obvious symptom is the growing frequency of children with crooked teeth wearing braces.[2]  Other symptoms include slack jaws, frequent stuffy noses, mouth breathing, disturbed sleeping at night (sleep apnea), and a general decline in physical appearance.[3] These symptoms indicate a growing, environmentally caused medical emergency that may eventually catapult dentists and sleep scientists to the front lines of public health.

The emergency lies primarily in the collection of serious diseases connected with disturbed sleep, including heart disease, cancer, ADHD, depression, schizophrenia, suicide, asthma, and perhaps even Alzheimer’s disease. Disturbed sleep is an extremely serious stressor for the mind and body, depressing the immune system and making an individual much more vulnerable to a wide variety of health problems. It also modifies the brain in ways that are currently only partially understood. Add to this the large contributions of sleep deprivation to highway accidents, medical mistakes, and poor performance at work and in school, and you can see the importance of this unrecognized public health emergency.[4]

But what do snoring and disturbed sleep have to do with dentistry? The answer is poor jaw development, an increasingly common trait that medical professionals have traced back 10,000 years to environmental changes caused by the agricultural revolution.[5] It was during this period that vocational specialization became possible, and workers diversified into mechanics, priests, soldiers, scientists and so on. That, in turn, led to industrialization, and tremendous changes to the way people lived and ate. For example, pre-industrial children nursed for years and were weaned directly onto the tough, chewy foods that their parents ate.[6]  Suddenly, children were weaned much earlier and transitioned into a diet of soupy “baby foods” that required little to no chewing.[7]

Over time, children’s diets grew increasingly soft and liquid-like. Few kids get to gnaw on a tough buffalo haunch today. Instead, they feast on hamburgers, cakes, and candies that “melt in the mouth,” sugary soft drinks, and the like. Working mothers have had to stop nursing and start relying on breast pumps and bottle-feeding. The problem is, extracting milk from a breast actually exercises a child’s jaw muscles. Having milk poured into their mouths from a bottle, not so much. This lack of exercise causes poor jaw development, crowded, crooked teeth, impacted molars, and unattractive long faces with receding jawlines.[8]  To understand why is hardly rocket science — imagine how a child’s leg development would be stunted if they were not allowed to walk. 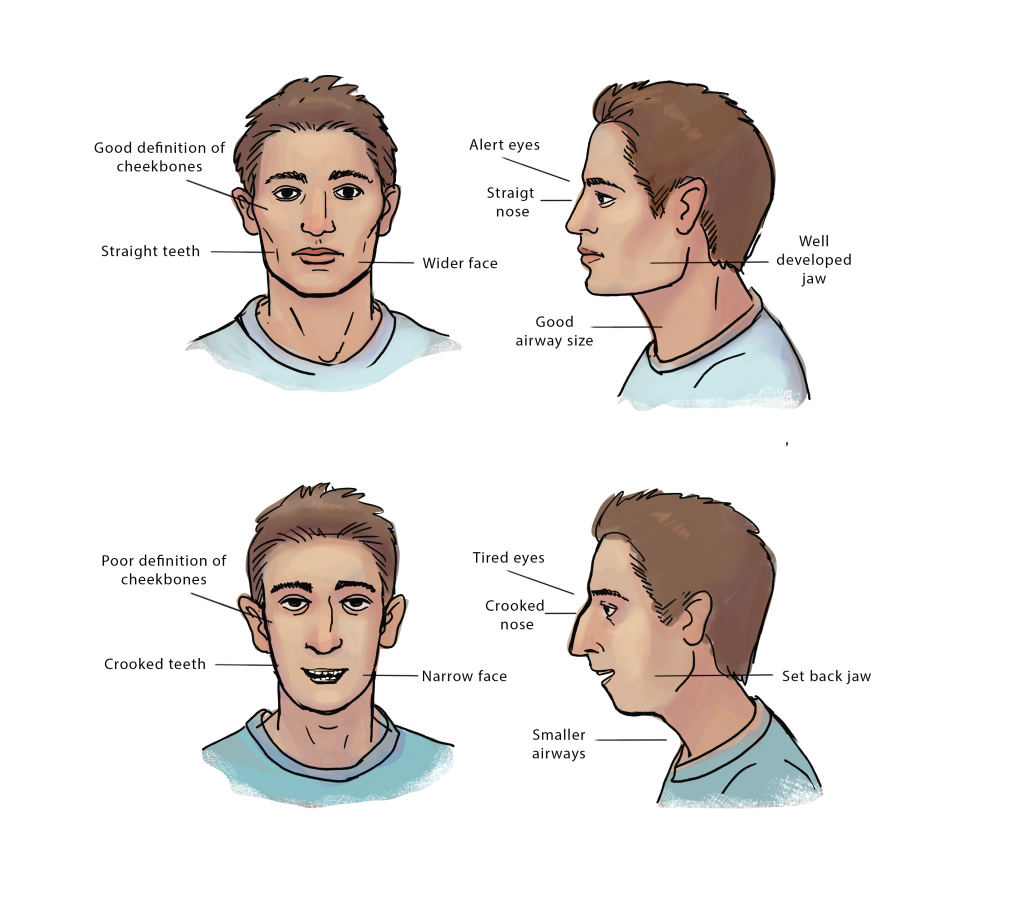 There is more to snoring than chewing

There is more to snoring than chewing, however. Today’s humans spend the majority of their lives indoors, where the substances that cause allergies, such as dust mites and formaldehyde concentrate. Allergies create stuffy noses, and that leads to mouth breathing.[9]  That, in turn, by-passes the natural air cleaning, warming, and humidifying functions for which our noses were designed. Since the bottom of the nose is the top of the upper jaw, this changes the pressure of the air flowing through the nose and mouth roof, further contributing to poor jaw development. This was documented long ago by experiments in which blocking the noses of rhesus monkeys produced great distortions in their jaws. [10]

One of the primary consequences of our shrinking jaws is inadequate room for teeth. An estimated 50 to 70 percent of children in the U.S. are currently being treated for “malocclusion,” or bad bite, but crowded, crooked teeth are actually only a modern phenomenon.[11]  Believe it or not, according to fossil records, our ancestors had no need for braces![12]  And while the cost and inconvenience of braces are unfortunate, there are far more dire consequences to malocclusion.

Smaller jaws mean less room for the back of the tongue, which can then slop back into the throat and cause snoring as the tongue vibrates in the partially obstructed airway.[13] Once mostly common among adults, even children are beginning to snore as humans’ jaws continue to shrink. Many scientists believe that snoring is mainly a post-industrial phenomenon as well, as there would have been strong selection against any of our ancestors, hunted by leopards, that snored while sleeping outside on the African veldt.

The bad news: snoring is a precursor to sleep apnea, in which the tongue blocks the airway entirely, and the lack of oxygen causes choking, awakening, and triggering of the sympathetic nervous system’s “flight or fight” response. That’s the serious stressor that increases the chances of nasty diseases.[14]

But there is also good news! The “cures” for the jaw epidemic are actually very simple, and children can stop mouth-breathing, avoid braces and prevent serious health problems through simple exercises, and small lifestyle adjustments.[15] Parents should return children’s diets to chewier foods, perhaps supplementing with special tough chewing gums. We can help decrease stuffy noses by more careful hygienic procedures in daycare centers. And medical professionals can modify some of our orthodontic techniques to emphasize the forward movement of both jaws, avoid extractions, and prescribe sets of exercises to correct jaw posture. One of these is a program called “forwardontics,” {Kahn and Ehrlich} which is focused on keeping the airway open. How we hold our jaws and tongue when not eating or talking is key to healthy jaw development: teeth should be in light contact and the tongue held against the palate, behind the top incisors. [16]

We need a determined and persistent educational program to push medical and dental schools to a more collaborative treatment of the epidemic. At home, treatment will require the careful and long-term cooperation of both parents and children who have not benefited from the preventive care with forwardontics. In both cases, determination and expense will be involved, but our hope is that many children and their families could avoid the medical consequences of poor oral posture and the high cost of correcting it entirely.

Kahn and Ehrlich are the authors of JAWS: The Story of a Hidden Epidemic (Stanford University Press, April 2018).

Paul R. Ehrlich, Ph.D., has been a household name since the publication of his 1968 bestseller, The Population Bomb. He is Bing Professor of Population Studies Emeritus and President of the Center for Conservation Biology at Stanford University. Ehrlich is a member of the National Academy of Sciences and a recipient of the Crafoord Prize, the Blue Planet Prize, and numerous other international honors. He investigates a wide range of topics in population biology, ecology, evolution, human ecology, and environmental science. His latest book is "Jaws: The Story of a Hidden Epidemic," co-authored with Sandra Kahn, DDS, published by Stanford University Press.

Dr. Sandra Kahn, D.D.S., M.S.D., has twenty-five years of clinical experience in orthodontics and is part of craniofacial anomalies teams at the University of California, San Francisco, and Stanford University. She practices pediatric sleep apnea prevention and whole-body treatment, lectures internationally, and is a co-author of Jaws: The Story of a Hidden Epidemic.