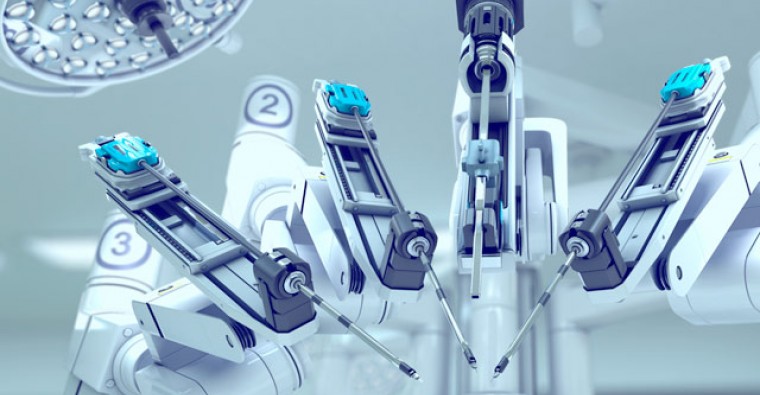 Robotic surgery that once started off as a minimally invasive surgery has emerged and evolved as much more than that. It involves the use of miniaturized surgical instruments that can be inserted into the patient’s body through incisions that measure less than a quarter of an inch.

The da Vinci System, which is also known as the world’s most advanced surgical robotic system, has already made its way into the operating theatres across hospitals in different parts of the world. Among several arms of the robotic system, there is an arm that has a high-definition 3-D camera attached to it that provides a magnified view to the surgeon during the surgical procedure.

There are surgeons who argue that robotic surgery achieves the same goals as achieved by a laparoscopic surgery. But the time it takes to visualize and control the robot through a computer is much greater than a doctor using a laparoscope.

The following section explores what researchers from around the world report about the use of robots in the operation theatre and their impact on the surgeons, the patient, and the surgical outcomes.

There are several review articles based on non-randomized studies that suggest that the outcome measure of robotic surgery is no different when compared to conventional laparoscopic or open surgery. Some of the procedures extensively studied and compared by researchers around the world include cholecystectomy, esophageal reflux disease, colorectal surgery, gynecological surgery, prostate cancer surgery, and abdominal surgery.

Robotic surgery may offer a bucketful of advantages, however, the following are some of the major concerns of many researchers and physicians around the world:

Robotic surgery is a lot more time-intensive than laparoscopic surgery. The author of a paper published in the Journal of Minimal Access Surgery claims that the time taken to complete one surgical case laboriously and meticulously in a robotic operating room (OR) is almost equivalent to completion of four complex laparoscopy cases in other ORs.

It is costlier than laparoscopic and open surgery

The same research paper also details on the cost associated with the use of robotic technology. Robot installation in the ORs required an initial investment of at least $1,500,000 to $2,000,000 and the maintenance costs are estimated to be around $350,000 to $400,000. Moreover, it makes use of expensive sterile drapes and disposable instruments.

Robotic hands can access inoperable areas and other remote tissues in the human body. But a surgeon is almost always required to make the decision and guide the robotic tools to perform specific actions. Completely independent and decision-making robots are yet to become a common entity in the ORs. Clinicians and researchers around the world are working on artificially-intelligent robots that can learn on their own, make a decision, and perform tasks independently.

Even if it acts independently, human surveillance will always be required

Decision-making robots are not common yet, but they may become common in the future. One of the biggest questions that the medical fraternity is busy debating about is whether a robot can be given the responsibility to control the life of the patient single-handedly? They are just machines, after all, which is at a risk of breakdown of faulty programming. Human surgeons will still be required to watch over these machines.

It may divert the ultimate objective of the surgeons

Not all surgeons are trained to handle robots in the operating room. In fact, training for robotic surgery is difficult, even for surgeons with an extensive experience. This is because it involves learning an entirely new skill set from scratch.

Learning to use robotic tools to perform surgery takes time and the skill, itself, improves only after years of experience. A successful robotic surgery can only be conducted when the surgeon is able to interpret visual feedback given by robotic tools as successfully as tactile feedback received during a traditional surgery.

In every country, there are surgeons who have been trained in robotic surgery and have gained a significant experience so far in the field. However, there is a large majority who is still more comfortable conducting open and laparoscopic surgeries that offer the same results.

Many surgeons have a little knowledge and no experience of robotic surgery. Considering the increasing popularity of it, there are many of them who would like to join the bandwagon by upgrading their skills and do not want to miss out the opportunity. Many researchers fear that this may actually divert the interest of the surgeons.

There must be a way to instill surgeons with the zeal to make dedicated and passionate efforts to use this technology and establish better outcomes in their respective niche areas of surgery. The ultimate objective of the surgeons should not be to master the skill and join the prestigious team of robo-surgeons but to use it as a tool for improved healthcare delivery and outcomes.

Even though there are a lot of cons associated with the use of robots in the OR, the specific advantages of the technology cannot be denied. Robotic technology is absolutely a boon for patients with illness or discomfort in an organ located in “cramped spaces”. Robotic surgery for cancer of the cervix and the prostate are considered highly successful and convenient.

Robotic surgery for knee replacement has gained an immense popularity in the last few years as well. Robots can help surgeons reach even the inoperable areas in the brain and also conduct a specific procedure in one quadrant of the pelvis. Soon, there will be miniature robots that can actually be inserted through the nostrils or ear to conduct skull base surgery.

It is a known fact that surgeons do not conduct a surgery just with a scalpel anymore. The advanced laparoscopic technique is now commonly used to perform a plethora of surgical procedures and there is a huge scope of further development in the future. If given an opportunity to hand over the surgical duties to an independent robot with artificial intelligence, surgeons around the world may decide to do the same in pursuit of surgical perfection.

Seeing the benefits of robotic surgery, it may not be logical to call it a farce. However, there are a few challenges that must be addressed before robots can actually become a permanent part of ORs around the world.

Guneet Bhatia is a freelance medical writing professional and has catered to the requirements of more than a dozen clients located across the globe. She is an aspiring novelist who intends to live a nomadic life with a vision to empathetically touch as many lives as a person can during his or her lifetime. She has a vested interest in breaking the health myths that people often surround themselves with.