How Phlebotomy Prepared Me for Medical School 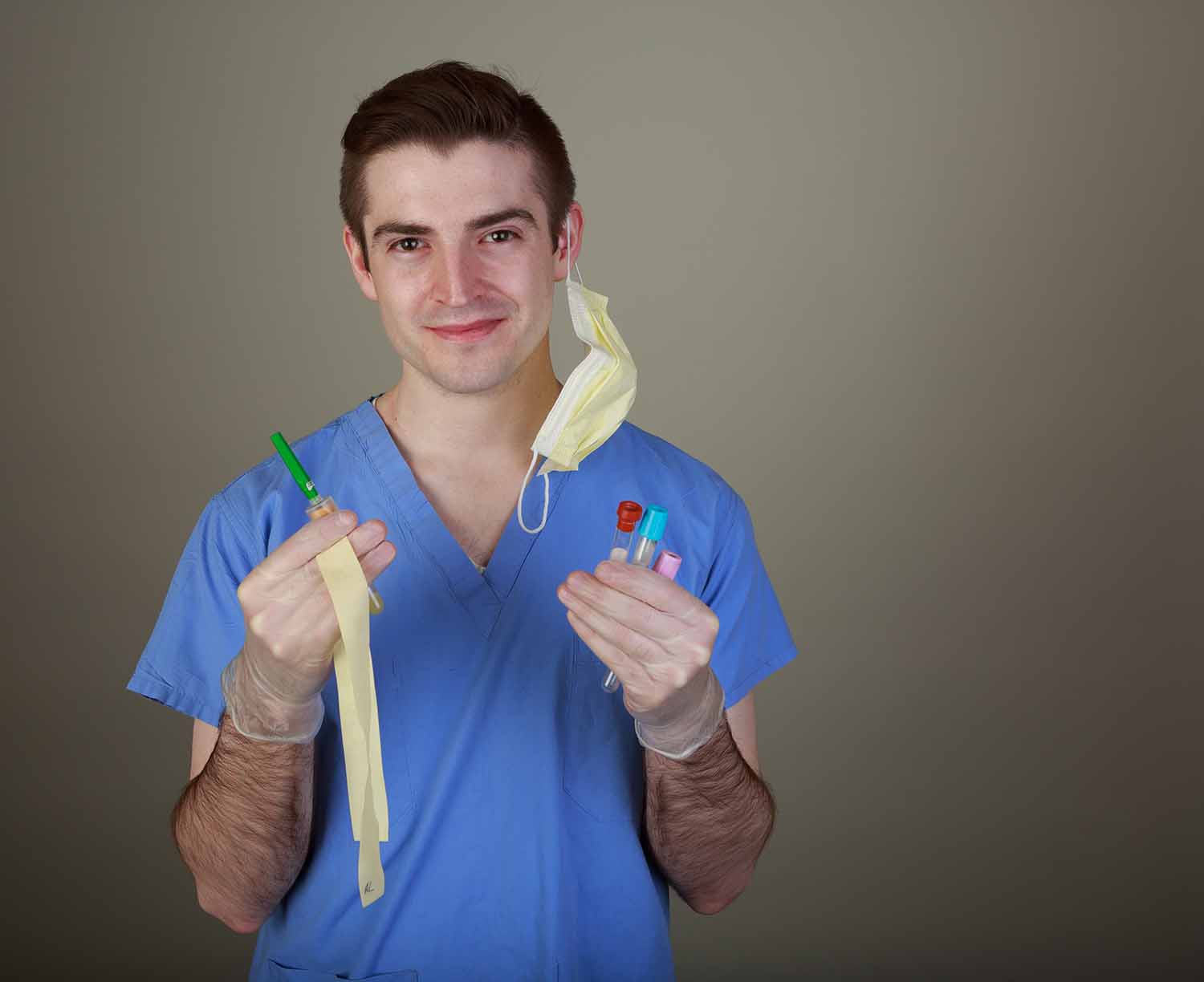 “I swear to God, if you come any closer, I will kill you,” said the 30-something-year-old, arms as wide as bazookas, eyes as piercing as the very needles I was about to stick him with. I was working as a phlebotomist as I was preparing for medical school.

The patient was hooked up to IVs on every limb, had tubes coming out of his nose and going down his throat, but other than that, he was about as physically fit as anyone I’d ever seen.

Frightened, sweaty, and wide-eyed, I quickly looked at the nurse. I was hoping she’d tell me what to do next. All the nurses so far had been nice to me, so willing to help. But not this one.

With her SpongeBob SquarePants scrubs and neon pink crocs accompanied by a how the heck should I know? look, she shrugged and left the room.

“Umm, uh, Sir…” my voice cracked. “If you just let me do this, and I promise I’ll be quick, maybe you’ll get out of here sooner.”

I really had no idea if that was actually true, but it was generally my go-­to line when patients were hesitant about me drawing their blood. I fumbled around my tackle box where I kept all my supplies and grabbed the tiniest needle I could find.

“Here, look at this thing. I promise you won’t feel it at all,” I said, now sweating bullets while trying to maintain my fake smile without giving away the fact that I was truly scared shitless.

He wanted answers but I had none

“I haven’t gotten any sleep in three days,” he screamed. “And ya’ll keep coming in here sticking me like a pin cushion! And why the hell won’t the doctor come in and tell me what is going on?”

Of course, I had no answers for him, but I was relying on my calming personality to put him at ease. No such luck. This guy really didn’t want me to come near him.

Generally, I take these threats lightly because these patients are really sick and justifiably grumpy. After all, nobody in their right mind actually enjoys being in the hospital.

But, for some reason, I truly believed this man might hurt me had I gotten any closer. There was no need to try and test it.

As I began to walk out of the room and respect the patient’s wishes, I was stopped dead in my tracks by those hideous SpongeBob scrubs.

“This is a court-­ordered draw. We need you to get it today.”

Crap. My third day by myself on the floors (I had been training for a few weeks prior) and I was already in danger of getting hurt.

Give me one chance to draw your blood

After praying to whatever higher-order being would listen, I gathered myself and let out a deep breath. Then, I turned back around and pleaded with the patient, explaining to him what nobody else would. I told him to give me one chance. If I couldn’t get it right away, I promised I would leave and not come back.

After about five minutes of polite begging, he angrily gave in, probably because he wanted nothing more than to get back to bed. Thankfully, his veins were the size of pipelines. I could’ve drawn the blood blindfolded.

After I finished, I thanked the sick, disgruntled man and packed up. I looked at the clock—somehow that entire interaction took just ten minutes. It felt like hours. The sweat made me feel like it had been days but it was only 6:30 in the morning. My day was just getting started. Oh well, onto the next one.

I loved every minute as a fledgling phlebotomist

As unbelievable as it may seem, I had been threatened, punched, and talked-­down-­to on a regular basis during my time as a phlebotomist. Further, I was sacrificing my precious summer sleep to wake up at 4:30 AM every morning while my friends were snoozing past noon.

However, the work has provided me an opportunity to meet patients from literally all walks of life even though a whopping zero percent of them were ever happy to see me.

At 18, I was the youngest person in my department by over 10 years. I could tell that the patients with their distrusting glares and their “you actually work here?” attitudes knew it. I once had a psychiatric patient twice my size rip the needle out of his median cubital vein and try to stab me with it.

I had many co-­workers who were fired for getting angry with patients or just because they didn’t care about their job. One inexplicably hit a patient!

I was on my feet non-stop for eight hours a day drawing 50 specimens a shift. Ah, a day in the life of a fledgling phlebotomist…and I loved every minute of it.

Then my mom got sick

I started working at Albany Medical Center at around the same time my mom had been suffering from complications after a very common medical procedure.

For the first time in her life, my seemingly untouchable mother had to be hospitalized, and nobody had any idea why. I would get off of my shift and immediately drive over to the nearby hospital where she was staying to check up on her, looking very official with my ID badge and light blue scrubs.

“Oh, honey, you look so good in your scrubs! How was your day today?” my mom would ask with a forced smile, fighting through horrific abdominal pain.

“It was good, Mom. I’m really starting to get the hang of it. I only missed two veins today!”

It was a perfect irony—my mother, frustrated and losing obscene amounts of blood at one hospital, and me, struggling to get any and all drops of blood into those stupid little vials at another.

I watched as phlebotomists and nurses helplessly tried to find her veins and cringed whenever they “missed”. Most of the time, no apologies were given.

Further, the phlebotomists were often the ones who got upset. It was as if it was the patient’s fault that they couldn’t handle their job.

There is nothing more infuriating than medical workers who don’t seem to care about their patients.

My phlebotomy job reignited my desire to go to medical school

I had now seen both sides of the patient-phlebotomist exchange. It completely changed my outlook on those few irritated patients I had to put up with every day. Nobody wants to be in a hospital.

From then on, I didn’t get upset when patients grunted as I walked into their rooms. I tried to make a point of being kind, courteous, and efficient. It’s amazing what good manners and common courtesy can do for the extremely ill.

That first summer at Albany Med reignited my fire to go into medicine. Yeah, I was pretty sure it was what I wanted to do, even after suffering through the monotony of Organic Chemistry, Physics, and Biochemistry. But, for the first time in my life, I was absolutely sure about it.

After having my own sick patients to take care of, and especially after seeing one of the most important people in my life confined to a crappy hospital bed with even crappier service for almost a month, I knew that helping people at a hospital was exactly what I wanted, no, needed, to do.

Other medical student stories:
The Privilege of Being a Third Year Medical Student
Pear Pressure: A Medical Student’s Introduction to Empathy
My Doctor Diagnosed Me With Thin White Female Syndrome

Coming to medical school this past fall, I felt I was a fringe candidate. I had gotten decent grades throughout college, but nothing spectacular. I barely did any extracurriculars, hadn’t held any leadership positions, and my volunteer work was pretty sparse.

Where I felt I had a leg up, however, was my clinical experience. I mean, come on, what better way to acquire medical knowledge than to spend all school breaks in a hospital, seeing patients of every class, creed, and culture every day?

So when it came time to conduct our first patient interviews as medical students, I was shocked at how nervous I was. How was this possible? Prior to this, I had thousands of patient interactions under my belt—good ones, bad ones, and downright scary ones.

Maybe it was because I didn’t know this hospital at all and was lost with every turn. Perhaps in some gruesome way, I felt naked without my tackle box chock full of needles. Whatever it was, I felt like I had never even talked to a stranger before.

But with one quick flashback, I was no longer worried. For once, I wasn’t doing anything that could potentially cause the patient pain. I was pretty sure I wouldn’t be threatened before I could even introduce myself. After nervously knocking on the door and putting my shaky hand out to greet the smiling man, I was finally able to breathe.

This was going to be a breeze.

Margaret Cary, M.D., M.B.A. developed and taught the Narrative Medicine/Personal Essay course at Georgetown University School of Medicine. Her students’ essays reflect their thoughts on being in medical school and becoming physicians.

Connor Benton is a Board Certified Internist and Primary Care Attending at the VA Medical Center in Washington DC. He trained in Internal Medicine Georgetown University School of Medicine where he served as Chief Resident during his final year of training.

Before attending medical school, Connor attended Cornell University in Ithaca, NY. He grew up in upstate New York and has loved writing from a young age.