The mouth contains one of the most important microbiomes of the human body. It is home to some 700 different species of bacteria that live in different microbial sub-habitats:

While the mouth is one of the most vital body parts for our health, its significance is often overlooked. In fact, despite my background as a clinical dentist, even I was surprised as I delved into the research on the relationship between periodontitis and systemic diseases, such as cardiovascular disease, COPD, and cancer.

The mouth is the first point of contact for microbes

The mouth is the first meeting place between our gut (and immune system) and the outside environment: microbes, pathogens, toxins, and food nutrients. As the first point of contact, the oral microbiome seeds the rest of the GI tract, with a 45% overlap between the microbes found in the mouth and in the colon (1).

However, while a high level of species diversity within the GI tract is correlated with better health, oral disease is associated with higher diversity and richness of microbe species.

Good oral health is ensured by maintaining the homeostasis of a relatively limited number of microbe species living within the mouth. 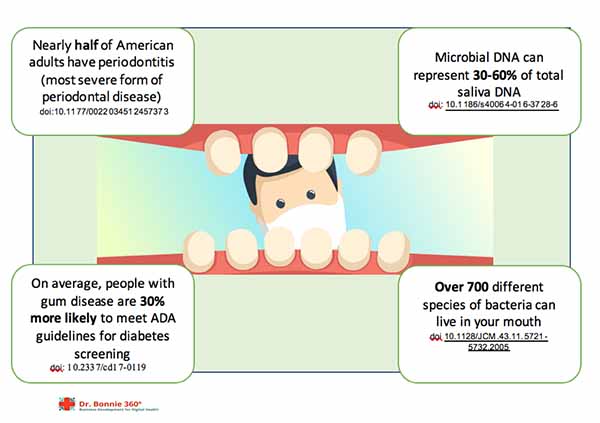 A new understanding of the oral microbiome is shaping how we think about oral health and disease in relation to some systemic diseases. So far, three pathways linking oral infections to secondary systemic effects have been proposed.

We can gain a more concrete understanding of these mechanisms by looking specifically at the second most common oral disease in the world: periodontal disease, which also called periodontitis. It may surprise you to learn that this common oral disease has connections to many systemic diseases, such as

Periodontal disease refers to inflammatory processes in tissues surrounding the teeth, in response to bacterial accumulations, aka dental plaque, on the teeth (3).

Anaerobic bacteria found in invasive microbial plaque can penetrate gingival tissues in the gums. When this happens, it can induce tissue destruction as well as inflammatory responses from cells such as lymphocytes, macrophages, leukocytes, and other cells with crazy names that are associated with the immune system. These cells act to protect your body from foreign pathogens.

Now, although it may seem as if the disease is only restricted to the territory of the mouth, periodontal lesions are recognized as continually renewing reservoirs for the systemic spread of bacterial antigens, cytokines, and other pro-inflammatory mediators (4).

In other words, a periodontal lesion is like a rotting fruit hidden in the trunk of your car. At first, you may have no idea that there is an old banana sitting in the corner of your trunk underneath a pile of shoes.

However, if left to sit, the once healthy banana will turn into a brown lump of mush that will attract fruit flies, in the same way that the bacteria in periodontal lesions elicit an immunological response. If the rotting banana is still not attended to, then the normal progression of any food item that is left out will follow. The smell of decay will inevitably permeate the entirety of the car.

Periodontal disease itself is treatable through surgical procedures that involve removing plaque and tartar from the teeth and root surfaces. Relating back to the rotting fruit analogy, once the source of the smell is found, it too, can be cleaned and managed.

However, the smell will still remain for quite some time after, similarly to the way periopathogenic bacteria will remain in the body due to dissemination via the circulatory system. This can lead to increased risk of certain systemic diseases, including cardiovascular disease, as well as prompt reinfection of the gums.

Researchers have linked periodontitis to cardiovascular disease by corroborating associations between specific bacteria (consistent with periodontitis) and coronary diseases developing as a result of atherosclerosis.

The exact mechanism by which pathogenic bacteria involved in periodontal disease (such as Porphyromonas gingivalis, Helicobacter pylori, and Prevotella intermedia) influence the thickening of arterial walls is still in the hypotheses stage. It is proposed that the migration of such microbes into the circulation system can lead to a direct invasion of arterial walls.

Another proposed pathway is the release, in response to infection, of systemic inflammatory mediators that produce arterial plaque, one of the early stages of atherosclerosis (3). Periodontal pathogens can also spread into the systemic circulation system by means of dental treatment procedures that allow them to pass directly into the bloodstream.

Due to the close proximity of the oral cavity to the respiratory tract, perhaps it is easier to see how pathogens in the mouth can affect the lungs rather than the heart. In fact, recent epidemiological studies have shown that there is an increased risk of chronic obstructive pulmonary disease (COPD) as a result of inflammatory responses to certain periodontal pathogens (such as P. gingivalis).

Despite the numerous shared associations between periodontal disease and COPD, the exact mechanism by which oral bacteria contribute to the pathogenesis of respiratory infections is still unknown. However, studies have suggested that either direct aspiration of oral pathogens into the lungs can cause infection, or periodontal disease-associated enzymes in saliva can alter mucosal surfaces, promoting adhesion of respiratory pathogens further down in the trachea and lungs (5).

Research on this topic is still in the early stages, but the basis on which it stands still traces back to bacteria involved in periodontal disease and, ultimately, an imbalanced oral microbiome.

Related content: Pregnancy and Oral Health: What You Need to Know

Periodontitis is not just a disease of the oral cavity. It has links to serious systemic diseases, such as cardiovascular disease, chronic obstructive pulmonary disease, and cancer. Although, we don’t fully understand the exact mechanisms involved, here is one thing we do know:

Ellen M.Martin and Hailey Motooka were co-authors on this story. Click on the link to learn more about them.

This story was originally published on July 3, 2018. It was reviewed and updated for republication on February 27, 2020.