Cooperation in the Age of the Gerrymander 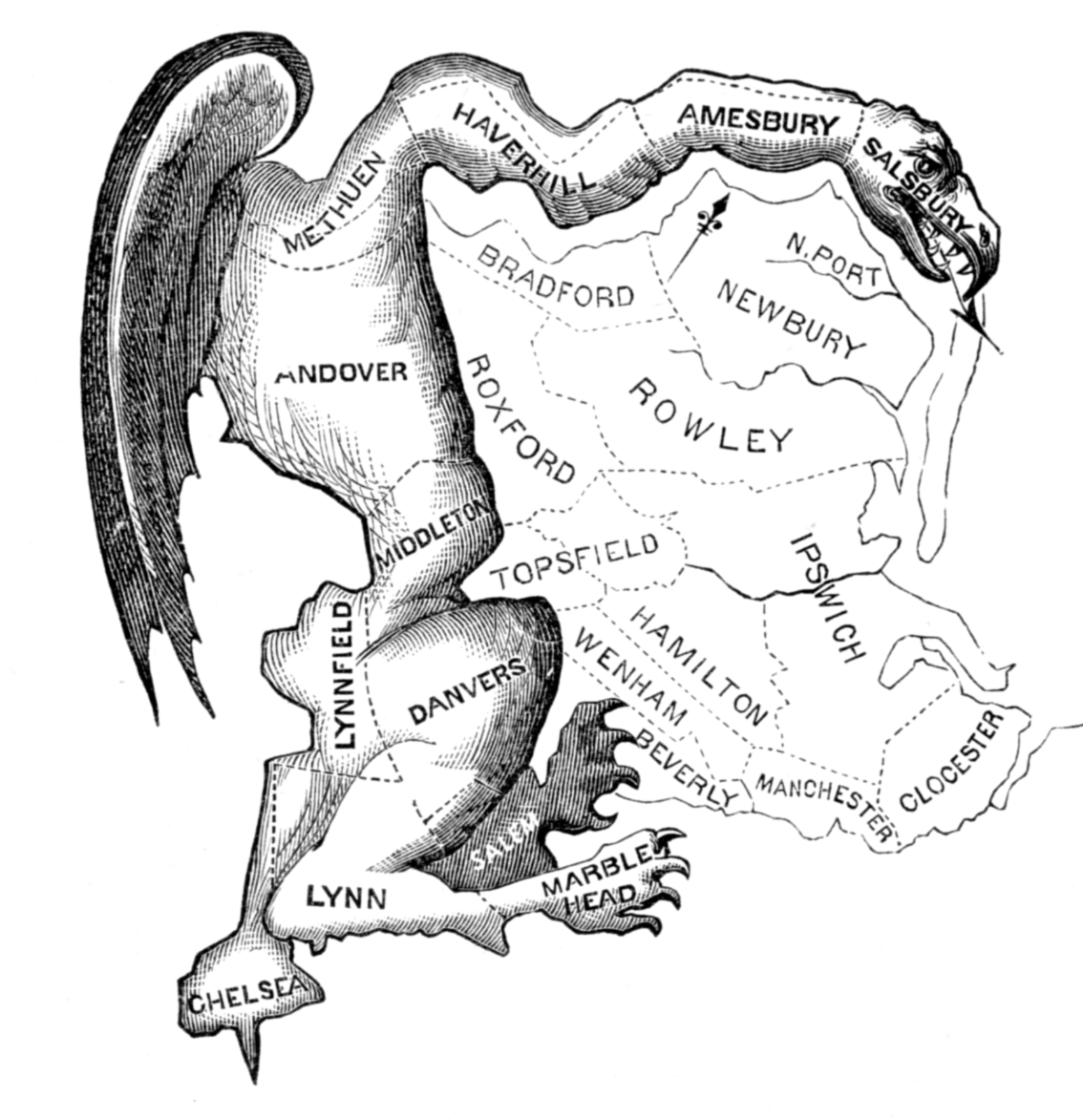 Before I dive into the story, I have to explain the picture. It is a political cartoon that was first printed in March 1812 in reaction to the redrawing of the state senate election district of South Essex in Massachusetts. According to Wikipedia, it was created to favor

“the Democratic-Republican Party candidates of Governor Elbridge Gerry over the Federalists. The caricature satirizes the bizarre shape of [the district] as a dragon-like ‘monster’. Federalist newspaper editors and others at the time likened the district shape to a salamander, and the word gerrymander was a blend of that word and Governor Gerry’s last name.”

Its presence in this story will become clear in a bit, but before I go there, I need to explain some biology (of course).

Have you heard the one about the two monkeys who stepped into a bar? One ordered apple juice. Then, the bartender whispered in his ear: “I have only one bottle of juice left; you can order one and share it with your friend, or you can have it all to yourself.” “That’s a no-brainer,” said the monkey, “I’ll take it all.” “Not so fast,” said the bartender. “I am going to give your monkey friend over there the same choice.” “Oh, that’s a dilemma,” thought the monkey, “What if that monkey orders the juice without sharing with me?”

This type of dilemma is a classic in game theory, a branch of mathematics. It pits one individual, or group, against another and tries, computationally, to devise an optimum choice. And mathematically, if the first monkey had no threat of retaliation by his friend, then it’s easy: Take it all. But if the game is iterated, meaning that we play it, again and again, giving each monkey enough opportunities to assess their strategies, most computer models agree: The monkeys should cooperate by sharing the limited resource (apple juice) for optimal result.

The human equivalent of this monkey story

Two members of a criminal gang are arrested and imprisoned. Each prisoner is in solitary confinement with no means of speaking to or exchanging messages with the other. The police admit they don’t have enough evidence to convict the pair on the principal charge. They plan to sentence both to a year in prison on a lesser charge. Simultaneously, the police offer each prisoner a Faustian bargain. Each prisoner is given the opportunity either to betray the other, by testifying that the other committed the crime, or to cooperate with the other by remaining silent. Here’s how it goes:

Unsurprisingly, computer programs are blind to the differences between monkeys and humans: Most agree that the optimal strategy for the prisoners is cooperation. In fact, other scenarios, such as members of the same species competing for limited resources, or different species competing for the same resource, or traders competing to make more money, or passengers scrambling to evacuate a crippled airplane — all should behave (mathematically speaking) in a cooperative manner.

This is why Darwin posited, and numerous biologists have demonstrated, that cooperation is a winning strategy in the harsh world of natural selection. And this is probably why women money managers, whose judgment is not clouded by a surfeit of testosterone, get better results, on average, than their macho counterparts. And this is why cabin attendants are trained in conducting orderly (hence, cooperative) evacuation of the passengers.

The overwhelming advantage of cooperation – at least in the past

Cooperation is so overwhelmingly advantageous that it must have been hard-wired eons ago. In fact, that is the neurobiology of cooperation.

In a paper in Nature, neurobiologists Keren Haroush and Ziv Williams of Harvard Medical School in Boston, Massachusetts zoomed in on neural circuits in rhesus macaques by implanting electrode arrays into a brain area called the dorsal anterior cingulate cortex (dACC), which is associated with rewards and decision-making.

The arrays recorded the activity of hundreds of individual neurons. When the monkeys played the monkey juice version of the dilemma game against a computer program, they rarely chose to cooperate. But when they played with another monkey that they could see, they were several times more likely to choose to share the juice.

As the monkey made its decision, a specific set of dACC neurons tended to fire if the animal was choosing to cooperate (that’s the decision-making function), allowing the researchers to predict its decision two-thirds of the time. A different set often fired if the monkey thought its partner would cooperate (the reward function of dACC), and the predictions were 80% accurate. Hard to argue with these kinds of results.

Cooperation is hard-wired in ours, and in most other mammals’ brains. Come to think of it, the reason these species are still around is because they “chose” the winning strategy of cooperation.

Gerrymandering and the non-cooperation of American politics

If you believe, as I do, that in the last analysis, we are social animals and, therefore, have to obey the biological imperative coded in our DNA and hardwired in our brain, then how do you explain our current non-cooperative (more accurately described as toxic) political reality? Certainly, the human race has not undergone some disastrous mutation that transformed us within one generation into a dog-eat-dog society. Also, it is inconceivable to assume that our collective dACC stopped functioning. I have a theory that may explain what has happened.

Our voting system is determined in most states by a political process that is controlled largely by the party in power. In true self-preservation fashion and driven by the same neurobiology that in other circumstances gave rise to cooperation, the party in power gerrymandered (some might say rigged) electoral districts to ensure the election or reelection of party members.

The intended consequence was safe districts dominated by the party in power. The unintended consequence is that the drive to cooperate has lost its raison d’etre. In neurobiological terms, the dACC no longer gets the reward signal generated by cooperation. The consequence: A decision-making function that is akin to the monkey who wanted to have it all to himself and was pretty darn sure that he is going to get it.

Such malfunction flies in the face of what natural selection dictates. But is it relevant on the societal level? Of course, it is. The evidence is all around us ranging from a decline in life expectancy related to the failure to address enormous gaps in social and other determinants of health across the population to the precipitous slide in our international standing. Unchecked, it is not hard to envision a civilization in decline. In fact, in free-fall.

So, attention all you non-cooperators: Rigging the system may have short-term rewards for some in society, but, in the end, we are all likely to lose BIGLY. It’s our biology, stupid, and it’s hard-wired.

This post was first published on November 23, 2014. It has been reviewed and updated by the author to reflect on the state of politics during the 2018 U.S. government shutdown.