Liquid Biopsy for Cancer: What You Need to Know 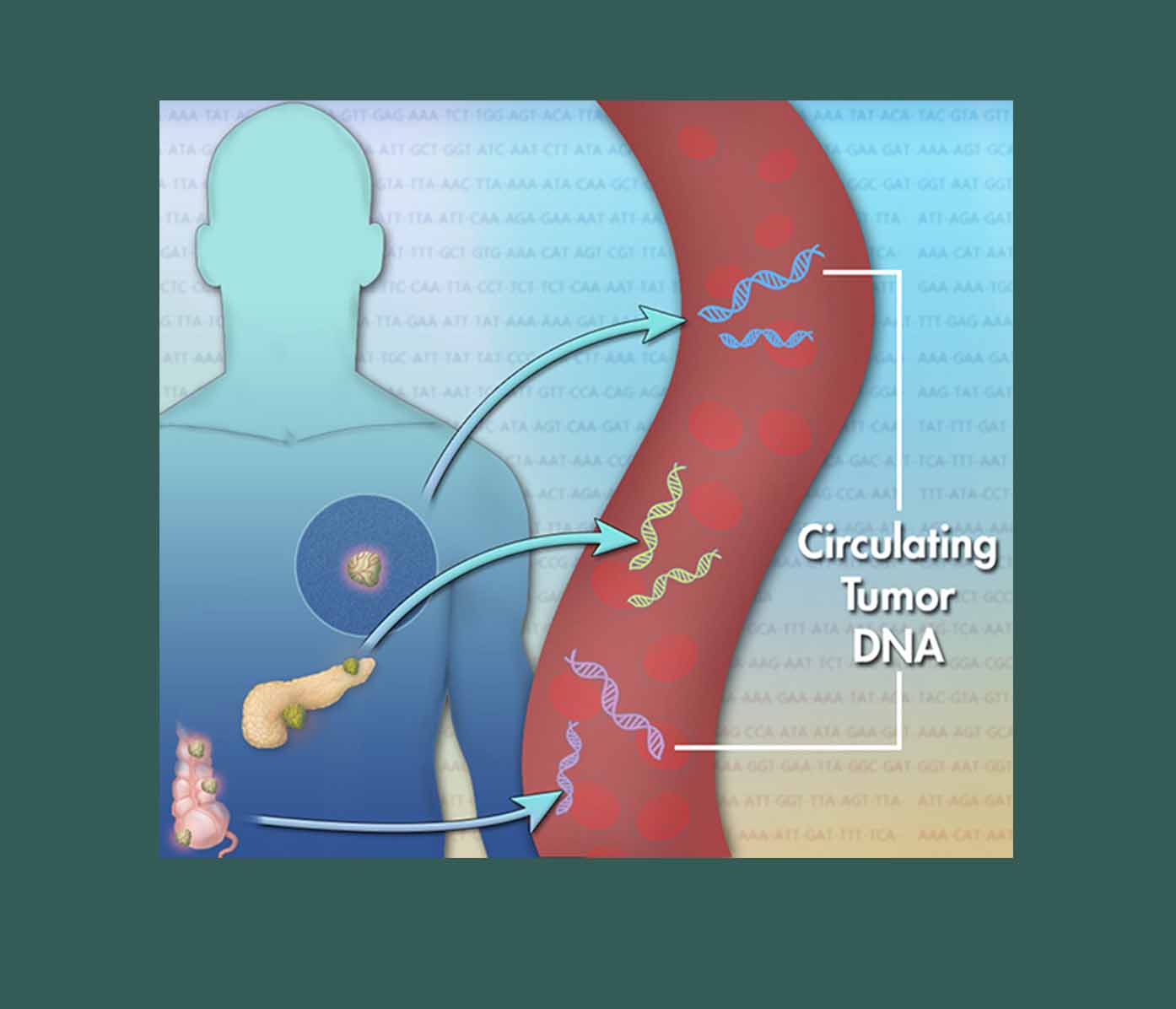 In his opening keynote for the Liquid Biopsy for Cancer workshop at the 2019 Precision Medicine World Conference, Max Diehn M.D., Ph.D., Associate Professor of Radiation Oncology at the Stanford Cancer Institute, defined liquid biopsy as

He noted that a variety of body fluids can be used to perform the biopsy, including

Liquid biopsy is possible because of the unique biology of cancer cells.

Topics covered in this review:

We now know that cancers occur because of an accumulation of DNA mutations in the genes that control cell proliferation over time. Most cancer cells will have 60 or more mutations although not all of them are related to cell growth.

Certain genes, such as P53, and the genes that code for the signaling protein RAS and the receptor tyrosine kinases (RTK), are mutated in cancer cells more often than other genes. And, different types of cancer have different patterns of mutations (the mutational signature). Most importantly, according to Diehn, some of these mutations are highly specific to tumor cells.

Further, almost all cancers continually shed cells or cell contents into the circulation. Sensitive detection technologies, such as those used in liquid biopsy, can then be used to find these cancer-specific substances, including

One of the main targets for liquid biopsy is circulating tumor DNA or ctDNA. According to Diehn, ctDNA is an attractive biomarker for cancer because

This means that ctDNA could potentially be useful in a number of ways over the course of a cancer’s evolution. These include:

There are a number of challenges that have to be addressed in order for ctDNA detection to be successful.[mfn]Diehn, M. Circulating Tumor DNA Analysis for Personalized Cancer Detection and Monitoring slide deck. Presented during the Liquid Biopsy workshop at the 2019 Precision Medicine World Conference[/mfn]

1. Limited amount of genetic material in the sample

The amount of genetic material in each sample is limited. There are only approximately 2,000 genomes found in each ml of blood.

Looking for this material can be like searching for a needle in a haystack. Although there is quite a bit of variation depending on the tumor size and vascularity, in some cases, ctDNA accounts for less than 1% of the total circulating DNA in the blood.

There are considerable differences in the mutational patterns between patients

The analytic approach used in liquid biopsy for cancer

The analytic approach used to do a liquid biopsy for cancer depends on whether biopsy tissue is available.

If a tissue biopsy has been performed, the liquid biopsy can be “informed” by an analysis of the tumor tissue DNA. Many of the tumor’s mutations have been identified in this analysis and can be used to create a library of mutations specific to the tumor. This is used to detect the presence of those mutations in cell-free DNA in the liquid being analyzed.

The main advantage of tumor-informed ctDNA analysis is that you don’t have to do a lot of hypothesis testing to figure out which mutations may be relevant in the liquid biopsy sample. The main disadvantage is that it requires tumor tissue.

If tumor tissue has not been obtained and the tumor mutations are not known, they must be identified de novo (from scratch) in the sample. This is harder to do and has a lower sensitivity because you must do multiple hypothesis testing and some mutations may be missed.

Why tumor biopsies are still necessary

There are a number of reasons why diagnosing and characterizing cancer still requires tissue sampling through a tumor biopsy.

Early-stage tumors release very little DNA into the circulation. If the quantity is below the technical capabilities of the liquid biopsy test being used, the result will be falsely negative. It is possible that screening for other substances, such as protein biomarkers can enhance the sensitivity of the test in early stage disease. As can use of highly sensitive tests, such as CAPP-Seq (see below).

Liquid biopsies may not detect all of the mutations present in any given cancer. As noted above, tumor biopsy can facilitate mutation discovery making possible a higher sensitivity due to less multiple hypothesis testing.

3.  Provide a more complete picture of a cancer’s genetics

Testing the blood for ctDNA and a tissue biopsy can provide a more complete picture of a cancer’s genetics. This is because pooling of all fragments in the circulatory system may result in the identification of ctDNA mutations that arise outside of and are not present in the primary tumor (e.g., in metastases).

There are major limitations of tissue biopsies. First of all, the procedure is invasive. Further, it may be difficult to obtain tissue based on location, such as in the lung. There is also the risk of complications.

In addition, a tumor changes over time as it grows and is exposed to anti­cancer medications. That means tumor biopsies taken when the disease is first diagnosed may not reflect the current state of the cancer’s genomics.

Also, cancer cells that spread (metastasize) to different areas of the body may differ somewhat from the cancer at the site where it started. As a result, a tumor biopsy from one part of the body may not adequately represent cancer that has spread throughout the body.

However, repeating tissue biopsies to get updated information about cancer is invasive and associated with potential complications, such as pain, infection, and bleeding.

Also, undergoing multiple tissue biopsy procedures can be very difficult for the patient. It requires repeat visits with attendant transportation needs and time off work or school. Further, it can be costly in the face of high out-of-pocket costs.

CAPP-Seq is a very sensitive and specific method of detecting small amounts of ctDNA. It was developed by the Diehn Lab in collaboration with the laboratory of Dr. Ash Alizadeh. CAPP-Seq was able to lower sequencing costs by “only targeting specific areas of the genome that are recurrently mutated for a given cancer.”

The first step of CAPP-Seq is to identify recurrent mutations in a given cancer type using public cancer databases such as the COSMIC cancer database and TCGA. Next, a library of mutations is created using a complex analytic process.

If a tissue biopsy is available, hybrid capture is then performed to create a smaller library of mutations (the “selector”) that is specific to the patient. Finally, hybridization capture with the “selector” is performed on ctDNA from the patient’s blood sample in order to quantify the previously identified mutations in the patient.

A complete description of the CAPP-Seq process can be found in an article by Newman/Bratman et al. in Nature Medicine 2014.

The biggest concerns about liquid biopsy are its sensitivity and specificity. Is the test good at detecting cancer when it is present? Is the test sensitive? And, is cancer actually present when the test is positive? Is the test specific?

With regard to sensitivity, available evidence indicates that patients with early-stage cancers can harbor less than one mutant molecule per milliliter of plasma. This is often beyond the limit of detection of some of the technologies being used in liquid biopsy today. Currently, multi-mutation Next-Gen Sequencing (NGS), such as CAPP-Seq, is the most sensitive of the technologies.

A study using CAPP-Seq was done to assess the sensitivity and specificity of the test for one particular cancer type: non-small cell lung cancer. The study by Newman and his colleagues was published in Nature Medicine.

It demonstrated that ctDNA was detected “in 100% of stage II-IV and 50% of stage I NSCLC patients. There was with 96% specificity for mutant allele fractions down to ~0.02%”. This means that it was quite sensitive for advanced NSCLC cancers, but had limited sensitivity for early-stage cancers. The specificity of the test for this cancer was quite good.

Identification of tissue of origin

Another limitation of liquid biopsy is related to the identification of the underlying tissue of origin. Because the same gene mutations can drive multiple tumor types, liquid biopsies based on genomic analysis alone generally cannot identify the anatomical location of the primary tumor.

Liquid biopsy for cancer is an exciting new technology that holds a lot of promise in diagnosis, treatment, and management of the disease. It is also promising, but not yet ready for prime time when it comes to screening and early detection.

The field is moving rapidly so it is not unreasonable to expect that advances in the understanding of cancer biology combined with improved technology may move liquid biopsy from the research arena into clinical practice in the near future.

Thank you to Max Diehn M.D., Ph.D., Associate Professor of Radiation Oncology at Stanford Cancer Institute for generously sharing the slides of his keynote presentation at the Liquid Biopsy Workshop that took place at the 2019 Precision Medicine World Conference.

And, many thanks to healthcare communication and public affairs consultant, Leslie Rose, for her expert assistance in the preparation of this story.