How One Student Struggles to Become a Good Doctor 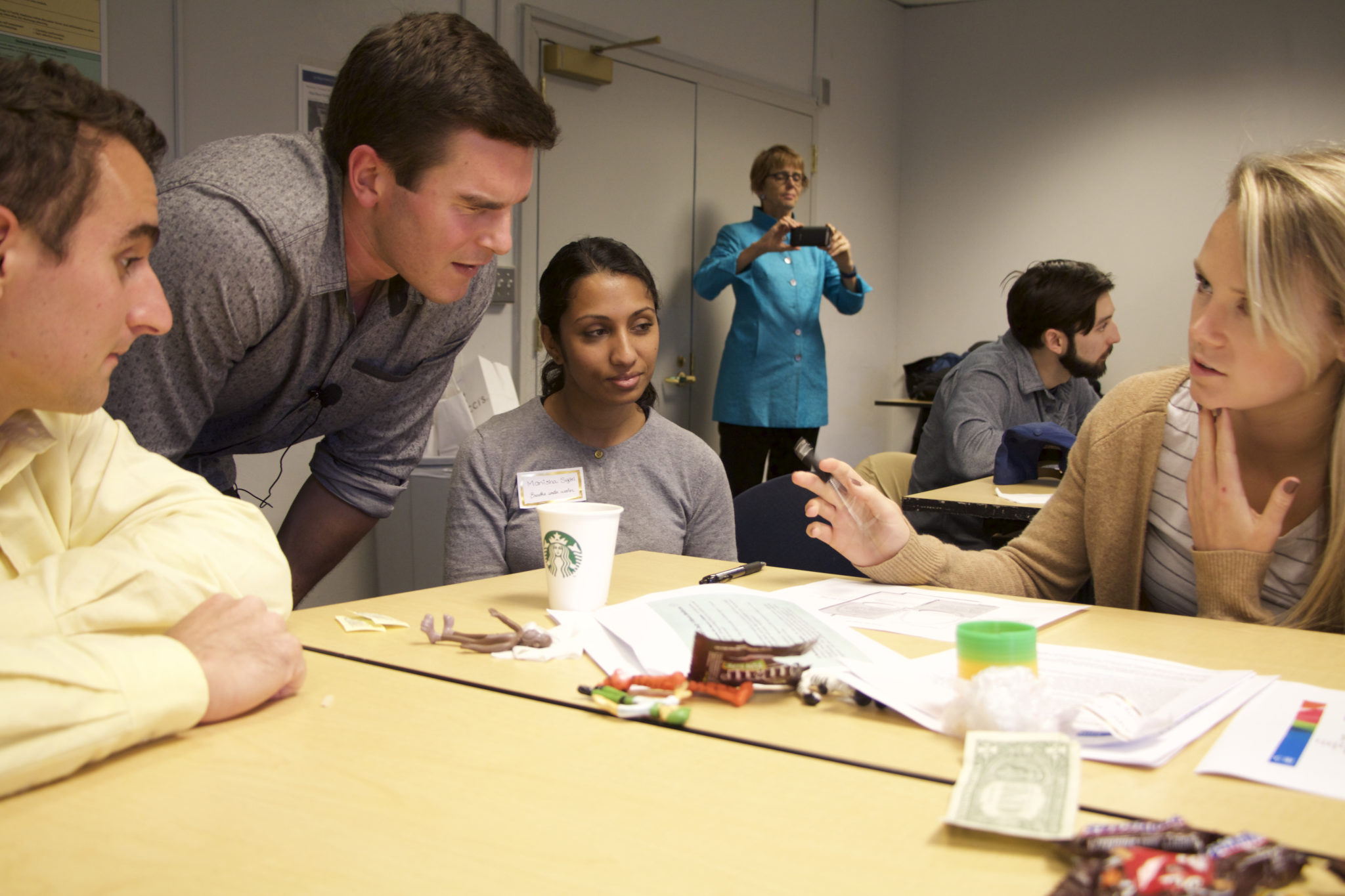 Margaret Cary, a longtime physician who teaches a class each year at Georgetown University’s medical school, is the founder of the Cary Group Global, a company that helps doctors adapt when they move from patient care to executive jobs.

Jack Penner, 25, is hardly her typical client. After three years of medical school at Georgetown, he began to fear that the stress and demands of his training would overpower the empathy, patience, and compassion that he considers essential to the patient-physician relationship. A professor suggested he meet with Cary.

Here, Cary and Penner reconstruct how they have worked together to help Penner become the good doctor he wants to be.

Medical school is about learning facts, such as knowing the nerves that branch from the brachial plexus, a network of nerves coming out of your neck. Learning how to listen to patients and colleagues is an art. In medicine, we often call communication and relationship-building “soft” skills, not nearly as rigorous or important as “hard” science.

Jack was caught between his desire to learn the science, mostly rote memorization, and his desire to become a compassionate physician—a doctor who listens to his patients for what they’re not saying. He worried that he wouldn’t be able to find a balance in an educational culture that heavily favors one over the other.

In one of our first sessions, he explained,

“I’ve heard so many horror stories that the stress of medical school beats the compassion out of you. I’m scared I’ll lose sight of what matters. The relationships, the connection. I don’t want to end up like that. Sometimes, I worry it’s inevitable.”

He went on to share how he wants to be a doctor who integrates scientific care that comes from the book with transformative care that connects with a patient’s soul. As his coach, it’s my job to help him get there.

Toward the end of a recent coaching session, I sensed that Jack had something else on his mind. Our time together usually concludes with a big smile on both of our faces as he realizes he’s not destined for burnout, frustration, and disconnected care.

This time, it hadn’t happened. His hands were clenched and his shoulders tight.

“What else?,” I asked. He sat back in his chair and let out a long sigh. He had just been with a dying patient and didn’t feel he had done his best.

“You know, I did everything my class on patient communication taught me to. The patient asked, ‘Am I dying?’ I offered a comforting hand, as we’re advised to do. I told him we were concerned with what he was going through. I assured him the attending [supervising] physician would be by later that morning to give more specific answers. I told him we’d do whatever he needed to be comfortable.”

“I told him I was sorry he had to go through this. He thanked me, and I felt pretty good walking out of his hospital room to see my next patient. I was honest, reassuring, and empathetic. I checked all the boxes I was supposed to check. But during the walk home, I felt a disconnect between my response to the words he spoke and the emotions behind those words.”

Jack paused, looked at the ground and resumed talking.

“I left a screaming silence in the room.”

“I answered his question as though he were the man I describe to my colleagues on morning rounds: 55-year-old Caucasian male, status post-surgery, showing signs of progressive liver failure.”

“Who was that person?”

“I don’t know because I never asked. Before I started seeing patients, I learned to ask. This year, when I need to use it the most, it slips to the back of my mind. I always have to have an answer for my attendings. If I ask a follow-up question, it means I’m stalling or I’m not prepared. I get rewarded for having an answer, not for asking.”

I hunched over, my mouth downturned, and my eyes dead.

Jack leaned in toward me and said, “What’s going on?”

Jack paused and then said, “Tell me more.”

Jack reached across and touched my arm, his eyes glistening.

“Melody died a month ago.”

“Melody, you know, Melody. My little dog. I got her just after I saw my daughter for the last time. She was a stray.”

As Jack continued to ask and listen, the character I was playing felt valued and heard. We were in the moment, two people connecting on what really matters: Universal fears and longings, and the fond memories that sprinkle smiles over the despair of illness and death.

What would it feel like if we paused, resisting the ingrained compulsion to immediately respond? What would it be like for our patients if we, physicians, reflected on what a patient being prepared for a cholecystectomy really wants to know when she asks, “What’s the surgery going to be like?”

She may want to know the length of her incision or the time she will spend under anesthesia, which we reflexively tell our patients. She may also want to know how this will affect her ability to be a mom, what not having a gallbladder will mean the next time she eats Thanksgiving dinner, and what the rest of her life is going to feel like.

What opportunity do we as doctors lose to connect with our patients when they’re left to Google the answers to questions they really wanted to ask? Worse, what do we lose when we leave them with no answer at all, the way Jack left his patient when the door clicked closed that morning?

As physicians, our default is telling rather than asking, talking rather than listening. Jack’s story reminds us of how early in medical training this develops. Medical culture pressures physicians to always have an answer. This approach works on the high-speed side of medicine when we need to efficiently decide whether a patient needs emergency surgery and what medications will keep him alive.

With quotas to meet and documentation to complete, we, physicians, may see the time it takes to address deeper questions as just another task that puts us further behind schedule for the day. But when we take that time, we and our patients connect with each other. We, doctors, experience the patient-physician bond that so many struggle to find in modern medicine, the patient-physician bond that called us to medicine in the first place.

Jack texted me three days after our coaching session.

“A patient I saw this morning needs surgery. His attending physicians opted to hold off on operating because of some risk factors and asked him to come back in six weeks. He was upset. Wanted it done ASAP.”

“That morning, the patient said to me: ‘Are you here to tell me I’m not going home today either? No operation and I’m staying another day?'”

“What’s bothering you? What else is going on?”

“We chatted for 10 minutes. The man just needed to vent. He said how much he appreciated me listening, that he felt better and, deep down, understood why they held off on the operation.”

“Also, the man said he really wanted a candy bar.”

“So, I talked with his nurse and we snuck him one.”

“He felt great. I felt great. And all it took was for me to take a second and ask myself, “Does he really want to know only that?” Just a brief pause before giving a reflexive response, enough time to ask, ‘And what else?'”

Atul Gawande, the surgeon and writer, began an article on coaching with this: “No matter how well-trained people are, few can sustain their best performance on their own. That’s where coaching comes in.” As Gawande—who sought coaching on his surgical technique—explains, coaches help us see errors in decisions we would not see on our own and teach us how we might avoid them in the future.

The text from Jack—on his immediate application of what we had worked on together—makes my coach’s eyes mist. As coach and client, we grow together, together to improve patient care one medical student, one physician, one healthcare organization at a time.

This article was first published in the Washington Post on 11/5/16. It is republished here with permission of the authors.

Maggi Cary (L) is a family doctor and leadership coach who engages her audiences in highly interactive presentations. Maggi is a doctor’s doctor with a physician’s mind and a friend’s heart. As an executive coach, she blends a scientist’s thinking with empathy. She translates the latest research in leadership development into her coaching process and into entertaining and highly interactive presentations. She is an author, trainer, facilitator, and teacher (Georgetown University School of Medicine). Her authenticity and ability to communicate and connect emotionally with her audience through storytelling—combined with just enough humor—result in rave reviews and standing ovations. She embodies a warm, sincere approach in sharing lessons learned as she guides you in creating your own Leadership Expedition.

Jack Penner (R) is a medical student at Georgetown University with an interest in primary care, healthcare leadership, and medical education. He served as a coordinator of Georgetown’s Student-run Free Clinic at the DC General Homeless Shelter, where he created programs in youth mentorship and maternal health. His writing focuses on the medical student experience and helping fellow students develop into engaged, compassionate physicians.