Have You Ever Been Abused by a Massage Therapist? You Are Not Alone

Two summers ago, I received a congratulatory gift of a massage at Elements Massage in Greenbrae, California, an affluent suburb just north of San Francisco. Little did I know that I was walking blindly into a terrifying episode of physical and sexual abuse.

What began as a strange, intensely painful massage escalated into a seasoned predator pleasuring himself both by inflicting pain and rubbing himself on me. Have you ever heard a woman describe her assault and say that she was frozen with terror? Did you wonder what she meant? Or questioned how she could have allowed it to go on? I don’t wonder about that anymore. At 5’0″ and 100 lbs, the most I could hope for by way of self-defense was screaming loudly and desperately struggling to keep the sheet covering me from falling to the floor.

I managed to extricate myself from the massage room and made my way to the reception area where I had to wait several minutes for the sole staffer, a receptionist, who had apparently been on break. When he returned, he was quite shaken after hearing my account. He put me in touch with an assistant manager, who put me in touch with a lead manager, who never got around to putting me in touch with the owner. After five months of stonewalling, I was inadvertently given something that, according to California law, I should have been able to access without having to ask—or file suit—to get: the last name of my “therapist”.

Turning to the Internet 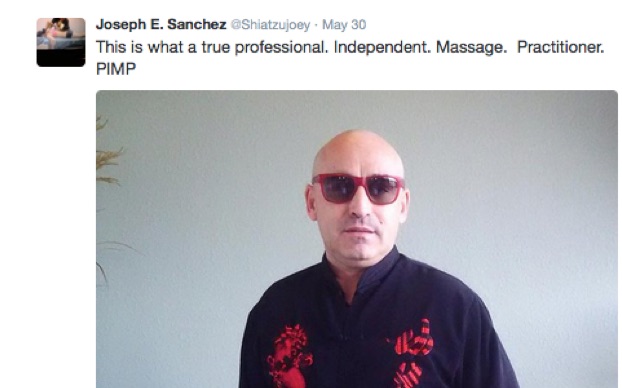 I took to Nextdoor.com to warn my neighbors about this apparent danger. I was dismayed to be contacted by multiple women who told me they had complained to the studio, not just about Sanchez but yet two more abusive therapists who worked there after his departure.

The new owner, who had taken over two months after my attack, assured the NextDoor community that this kind of thing would never happen under her watch—even as I was receiving information from women who had complained to her directly about abuses that included grossly persistent comments about the client’s body and a massage given with one hand only. Then Elements Massage Greenbrae dug in their heels and I got a lawyer.

During the ensuing litigation, an assistant manager testified under oath that 20% of my attacker’s customers had made complaints about him at Elements. Twenty percent. At a previous job, he was fired after an Army Paratrooper wrote that his massage was “like I was being tortured by the CIA for being a terrorist.” I discovered that he had gone through at least six massage jobs that year—and by January 2017, he had earned his fourth criminal conviction.

Elements Massage, with 233 stores, claims to have the “highest rated massage in the industry.” The company’s website also assures you that, “The best massage isn’t just a slogan, it’s a commitment,” and “at Elements Massage™ studios, each massage therapist is licensed and trained and…won’t put you through pain to provide…therapeutic massage.”

Despite that, Elements, whose website makes these specific claims, declared in court that they have “no control” over hiring, training, or actual execution of services—so, apparently, the “Elements Promise™” is to be filed under “puffery”. Why isn’t this fraud? It is our franchise laws at work.

So who should take responsibility for this?

Law enforcement never went beyond making a phone call to the studio and closed the investigation when the lead manager told the officer that Sanchez had never had any complaints. The computer system required of every Elements franchise would have told a different story but it was never looked into by the police.

The California Massage Therapy Council, for its part, only decided to stop issuing licenses to sex offenders in 2014. Moreover, none of the procedures that were in place when I and all those other clients were abused has been changed. The CEO of the Council, as can be seen in the video recording of the first part of NBC Bay Area’s investigation into the matter, seems not just aware of massage therapists with arrests but also resigned to them.

My lawsuit has been settled but it was another two years before Sanchez’s license was suspended. He will likely appeal, and Elements Massage will continue doing business confident that women will remain too fearful and too embarrassed to come forward; none of the other victims filed police reports, though about half had agreed to testify in court.

Our culture of misogyny

In the time since my assault, our country elected a Chief Executive who has boasted of gropings and is now working to undermine women’s control over their own bodies. We, women, every one of us, continue to be subject to unwelcome touching, leering, cat-calling, and more.

Friends, relatives, employees, and even the many strangers who had to listen as I feverishly told my story for months and months often responded with stories of their own—stories they told only to a very few, stories that were never reported to law enforcement. Some of these stories were decades old, yet these women were so relieved that this story did come to light. This is what kept me going through 18 long months of litigation and all of the endless delays and outrageously sleazy tactics defense lawyers deploy as a matter of routine: pointless psychiatric evaluations, outrageous lies they coax from their clients, endless documents, and surreal negotiations. All of it specifically designed to humiliate and defeat the plaintiff in order to protect the economic interests of their corporate client.

But it did not defeat me. I am going to keep on speaking out about my story so that others can feel free to tell theirs. Then, together we can work for change and demand it of our legislators. Now. Not decades later.

This was one of the worst things that had ever happened to me, but it is also one of the best because I’ve been handed an incredible responsibility and I intend to live up to it.

Soo Young is a former University of Chicago cell biologist who recently retired as a chef and wine broker. A concerned citizen of the environment, devotée of five rescue animals, and a lapsed competitive runner, she lives in Marin County with her partner, semi-retired attorney Erich Lichtblau. They are shifting their energies in the coming year to non-profits that promote social change.