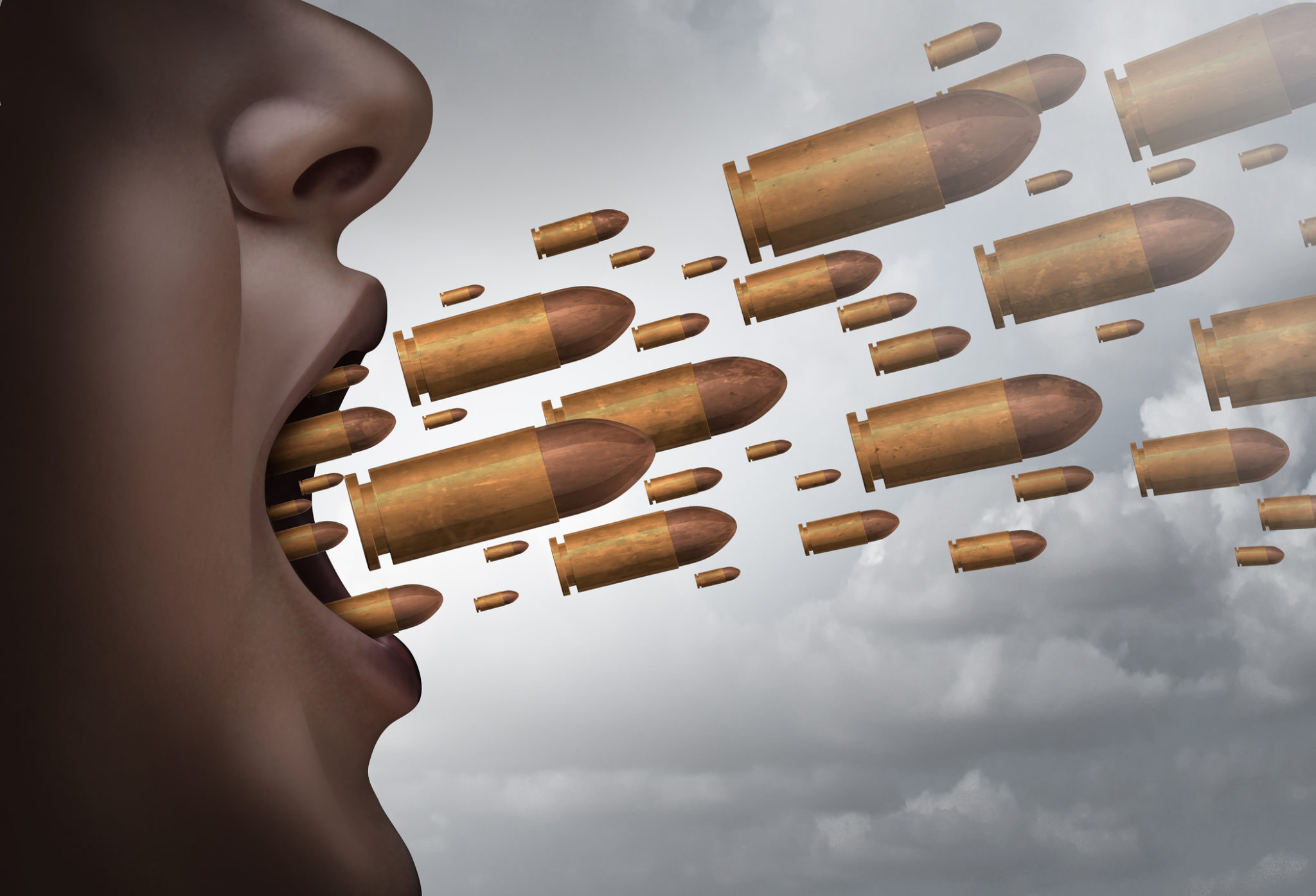 When we witness the horror of the mass shooting of innocent people who had nothing personal to do with the perpetrator, we wonder: “how could it be?”

How could an individual be so hateful as to extinguish the lives of dozens of people he didn’t know? People who didn’t do anything to harm him. People who were peacefully worshipping in their synagogue (Pittsburg), mosque (Bethlehem in the West Bank, Christchurch NZ) or church (Cairo Egypt, Islamabad Pakistan), to name a few.

The question “how could they?” actually goes deeper than just our generalized disapproving bewilderment. It leaves neuroscientists and social psychologists baffled as well.

Here is the scientific dilemma. Natural selection programmed us to be empathetic.

It endowed us with diverse cultures whose common moral foundation is the instinctual recognition of right from wrong. How could things go so wrong?

Let’s examine what’s happening here starting with how and why humans became empathetic and moral. And, closing with an exploration of the power of hate speech to activate primitive areas of our brains involved in evoking what are now considered to be destructive emotions: hatred, fear, revenge, and disgust.

How and why we became empathetic and moral creatures?

If you are put in an MRI machine and shown pictures or told a story, the MRI results would show something surprising. A picture of a person running, for instance, would activate your own motor cortex as if it is you who is running. If you see a mother crying bitterly over her dying baby, you would be filled with overwhelming sadness. Why does this happen?

It happens because our brains are wired with circuits located in different regions of the cerebral cortex that act as mirrors of the external world. This is the neurological basis for empathy.

Empathy is the capacity to understand or feel what another person is experiencing. It is sometimes described as the ability to place oneself in another’s position. This, in turn, gives rise to morality. It is the basis of the “Golden Rule”: “Do unto others as you would have them do unto you”.

Intuitively, it is easy to comprehend how empathy (“feeling one’s pain”) leads to the generation of the “Golden Rule.” It is noteworthy that the rule is the backbone of virtually all religions and moral philosophies.

Evolutionary biologists puzzled over the question of why should morality, basically a philosophical construct, survive virtually intact through eons of human evolution and natural selection. It suggests that there must be some survival advantage for a band, or a tribe, or society to behave morally.

There are several theories to explain the origin of morality. We’ll focus on the two that in my opinion are the most relevant.

What is reciprocity? Simply, if your family or band or tribe is bearing gifts to mine, we are more likely to reciprocate and be generous with yours. From this simple concept developed the more philosophically profound Golden Rule.

In its most common version, it states the principle of treating others as one’s self would wish to be treated. So what is the underlying principle of this maxim of all religions and moral philosophy? It is reciprocity!

How does the concept of reciprocity fit into the theory of the origins of morality? Richard Leakey and Roger Lewin attribute the very nature of humans to reciprocity. They claim humans survived because our ancestors learned to share goods and services “in an honored network of obligation.”

There is ample experimental and observational evidence that reciprocity is a strong determining factor of human behavior. It is also a powerful method for gaining compliance with a request because reciprocity has the power to trigger feelings of indebtedness.

But there is a catch: observations of monkeys and apes describe many examples of reciprocity as well. Yet, they cannot be described as moral animals. There must be an additional ingredient that is uniquely human.

This theory was proposed by Michael Tomasello, professor of psychology and neuroscience at Duke University. Basically what it says is that unlike other animals, humans have the ability to flexibly change behavior to achieve a particular goal. This can be directed for the purposes of better competing with others or for the larger good of the group.

If my wife is a better cook that I am (and she really is) than I’d opt for washing the dishes. This is an elementary division of labor and is as ancient as H. sapiens. But as the size and complexity of the social unit increased, so did the nature of empathy, altruism, and morality.

Importantly, the intention to collaborate (the reasons to collaborate) became more complex. For instance, stone age tribes in the jungles of Brazil support the survival of their elderly members for the abstract reasons of gratitude and respect. Not because it increased their own survival.

This, then, formed a fertile ground for the rise of altruism and morality as we know it today.

Regardless of the theory explaining our better angels, one fact is incontrovertible. Either through genetics, or through epigenetics, or culture, we are an altruistic and moral species.

The evolution of the brain

So if things are so wonderful, how is it that some individuals ignore their “better angels” and become hateful, revengeful, or even murderous?

The answer, as always, lies in evolution, more specifically the evolution of the brain. Unlike the popular concept that the brain is a wonderfully efficient computer unerringly executing our will in milliseconds, it is actually an inefficient machine. It is the product of eons of ad-hoc additions and fixes.

In the most primitive animals, the brain served mostly vegetative functions: blood circulation, breathing, some primitive aspects of digestion. These functions are located in the brainstem.

As animals became more complex, so did the functions that their brain had to subserve. When animals needed to see farther and in more detail, a large visual cortex evolved. When they needed to hear better, an auditory cortex developed. And so forth.

In order to survive to reproduce, animals also had to successfully react to the many dangers in their environment. This led to the development of a walnut-size group of neurons called the amygdala. This is the areas of the brain where rage, fear, and fight-or-flight instincts are located.

But then something astonishing happened about 200,000 years ago. With the appearance of the first human species, the neocortex began thickening at a rapid pace. It now contains many more neurons, capable of carrying out more and more complex functions, including the abilities to

The amygdala, hate, and hate speech

There is a constant tension in our brains (and psyche) between our amygdala-based defensive urges of fear, hate, revenge, disgust (demons we all carry) and our “better angels” of compassion, altruism, and morality.

As Kahneman and Tversky have shown, this delicate balance between primitive and enlightened and good and evil is vulnerable to influences of long-forgotten experiences, of unconscious biases, and yes-even to speech. Here are a few examples:

Over 2500 years ago the Bible already warned us:

This ancient wisdom is even truer today: words matter and they can tip the delicate balance in our heads to do good or evil.

A series of Polish studies showed that repeated exposure to hate speech can desensitize individuals to verbal aggression. This is, in part, because it normalizes what is usually socially condemned behavior.

What happens in the brain when you listen to hate speech? It provokes a surge of stress hormones, like cortisol and norepinephrine. It also engages the amygdala, the brain center for threat.

One study, for example, that focused on “the processing of danger” showed that threatening language can directly activate the amygdala. This makes it hard for people to dial down their emotions and think before they act.

What we can learn from the master of hate speech

Josef Goebbels, Hitler’s propaganda minister, was a master at understanding how to generate hatred. He called Jews cockroaches and rats. It was not by accident. These creatures evoke disgust. By repeating this name-calling, again and again, he de-humanized the Jews.

This allowed Nazis and their supporters to exterminate millions of Jews with the same moral revulsion that killing a cockroach generates. The moral sense of outrage that such an act would normally evoke was successfully anesthetized.

Fast forward to our own times. In an article on the “Neuroscience of Hate Speech,” psychiatrist Richard A. Friedman points out that President Trump’s rhetoric has been a powerful contributor to our current climate of hate and division. His words are ably amplified by the right-wing media and a virulent online culture.

Although we cannot directly tie the President’s hateful words to a mass murder, one could reasonably wonder – is it only a matter of time?

The bottom line: Political demagogues and peddlers of hate may not know the science of hate, but they do know precisely how to push our amygdala buttons.

Related content: Why I was Ashamed to be an American