Just Go With It: My First Patient Interview 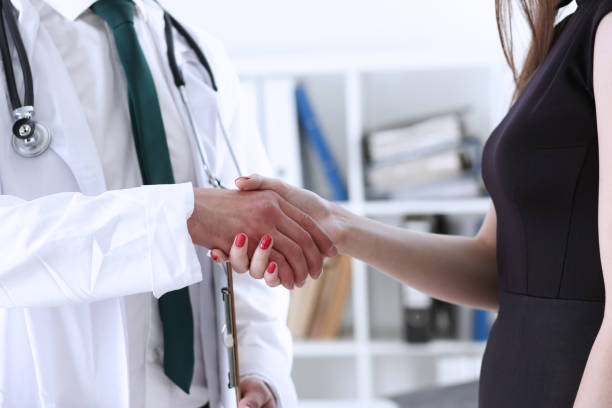 “Um—Hi there, I’m a, uh, you know. Medical student. First year. For, you know, the Patient-Doctor—err, Patient-Physician course—”

The nurse smiled and turned to a woman of shorter stature with bony, scrunched-up shoulders. “Mary, do you want this first-year to interview you?”

Mary was about to set foot in the lounge when she heard this. She let out a sigh and faced me. Her eyes looked worn; I could tell she hadn’t gotten much sleep lately. “Just did one yesterday.”

“Oh, that’s okay, no problem. Really. No problem. Honestly. I’ll just—err, ask, you know, the nurse. She’ll find me another, but even if not, I can just—”

“It’s okay, I’ll do it.” She turned around again. I was the only thing standing between her and the meatloaf that was waiting in the lounge.

She nodded. “I’ll meet you in your room,” I added. As I turned around, the nurse chuckled and fixed her eyes on my hair, which was gelled far more than usual. Her glance was one of those “I can tell you’re a first-year because you don’t look nearly sleep deprived to be further in your training” type of looks.

After grabbing a cup of coffee, I met up with the rest of my group, composed of several other first-years and our preceptor, a psychiatrist. Her role was to evaluate our interviews and facilitate patient interactions, if needed. My peers were tucked in the corner of the hallway by the elevators. We were just a few weeks into medical school, and I had already learned that the sight of short, neatly pressed white coats—paired with facial expressions that closely resembled four-year-olds in a toy store—typified first-years in the hospital. We had received our white coats two weeks earlier. First-years had a way of marching into the hospital with their arms glued to their sides, not unlike penguins stumbling around in a line. These constrained movements indicated that it felt anything but natural to don the white coats.

Our preceptor stepped toward me. “Where are we going?”

The mere fact that the floor has its own name tells everyone that things are different there. Am I up for this?

The psych ward was just as much an enigma to me then as it was when I was a child watching Batman. We stepped in the elevators. I picked up the musty, rubbery scent of the hospital more than ever in this tight space. My peers were engaged in a debate about the college football bowl games coming up that weekend. Penn State, Ohio State, Boise State, Auburn. A soup of names.

I tried to jump into the conversation. We had just started school that month and I wanted to do all I could to make friends in a new place. I couldn’t remember what floor we were going to, let alone which teams were playing. The doors shut and as the elevator ascended, I looked up at the ceiling, searching for something that my eyes could cling to. I saw those piercing bulbs that resemble the ones you see in movies, when FBI agents are drilling the bad guy with questions.

The elevator bell buzzed and the doors opened to the 7th floor. “Lead the way,” our preceptor said to me.

I looked to the left and then to the right. My mind was somewhere on the moon.

Which way was that ward? Where was I just moments ago?

If I had forgotten this, I could imagine what I would do when I actually interviewed my patient. I had rehearsed many of the challenging patient encounters in my head: the unyielding patient, the grieving patient, the sardonic patient. But I hadn’t imagined the problem of forgetting where I was going in the first place. After a few seconds of surveying brought me nowhere, I noticed my preceptor walking to the left, passing a sign that read, “PSYCHIATRIC WARD.”

I paced ahead of the group to Mary’s room. Unlike most rooms in the hospital, this one had windows that spanned the wall, allowing the light to radiate into every nook. Mary was nestled in her bed, tucked under the covers. I leaned forward and saw that her eyes were still closed.

“I’m sorry to wake you. I just, well, are you ready for the interview?”

She slowly raised her head. I noticed her eyes. They were puffy, round, and folded along the edges. She had cried. My knees felt unsteady. I thought back to my medical school interviews when I would sit across from successful doctors with enviable pedigrees, who would ask why medicine was the field for me. My answer was always rehearsed. I wanted to help people who felt “sick”—physically, mentally, or some combination of both—and medicine could allow me to make a tangible impact on people’s lives. The answer was always contrived to some degree. As an undergraduate, one is merely a spectator in medical settings. In this moment, I realized that I stood across from someone who, put simply, was “sick”.

I looked down at my white coat and my tie, which had passed about eight looks in the bathroom mirror over the past two hours. I did not feel like I was worthy to be associated with this person’s care, even for just a quick interview.

“I am still a kid,” I thought. “Twenty-two years old. Just one year ago, I was a college student with no responsibilities. Am I ready to do this?”

Mary got up from the bed, rubbed her eyes, and followed me over to the lounge. My group and preceptor were waiting there, sitting around the table. I did all of the things we had learned in class. I could hear my professor’s voice in my mind.

“Make sure the patient is comfortable. Pull up a seat and stay on her eye level so that you do not appear condescending.”

I cleared my throat and gave the preamble I had run through in my head more times than I could count.

My name is Chuck

“Okay, well Mary, again my name is Chuck and I am a first-year medical student, here with my classmates and preceptor to interview you for the Patient Physician Communication Course.” Mary’s eyes were glued to the black and maroon stripes on the carpet, which had to have survived several decades of use.

“Well, I’m just going to ask you a few questions about your history and experience here at the hospital, if that’s okay.”

I was waiting for her eyes, but no luck. I could hear the lub-dub pounding in my chest.

“All right, um, let’s get started.” Another pause. “What brings you into the hospital today?”

“I’ve been hearing voices,” she said.

Voices?, I thought. This start did not fit any of the cookie-cutter chief complaints we were prepared for, like headaches or stomach pain. I nervously put my hand on my legs, which felt like gelatin by this point.

Overly conscious about avoiding awkward silences, I jumped in with the knee-jerk question we had learned from day one of our communications class. “Um, could you tell me more about these voices?”

I could hear the quiver in my voice and could only imagine what my classmates—heck, my potential friends—were thinking about me.

“Been having them for a while.”

“What are the voices saying?”

“Pretty much always there.”

Barely a minute had passed and I could already feel the arsenal of questions slipping away from me.

“Are you on any medication for this?”

Upon further prodding, she mentioned a laundry list of medications, none of which I recognized from my nonexistent experience. The names of these drugs were garbled, lost in my mind.

“How have you been doing with them?”

I imagined the post-interview breakdown required of each group. All the other students in my group had interviews that went on ad infinitum; their conversations with patients seemed effortless.

Where would they even begin with their criticism of my interview? Would they look at me any differently outside of school?

I needed to shift gears. I needed to do something to jump-start the interview. We had learned various techniques in class to build rapport, such as indicating empathy and using the vocabulary of the patient to phrase your own questions. For some reason, none of those techniques felt right in that moment. All I could do was let my lips move. I was the puppet and my subconscious was the strings glued to my mouth.

Just go with it, I thought.

Before I could even think about what Mary’s reaction would be, I saw the corners of her lips pucker up.

“It actually is amazing.”

“Really?,” I said, pulling my hands off my knees.

I have no idea what I am doing but something is working.

I blurted out a laugh that was admittedly louder than it needed to be, but that was okay because my classmates did, too. We progressed to a discussion about hospital food and how it compared to the local order-out spots. I learned about her experiences with doctors, nurses, family, psychiatric medications, and, perhaps most importantly, her struggles with schizophrenia. It was not an interview that would win any sort of award, by any standard. But I covered the bases that I needed to cover: the past medical history, social history, and history of present illness.

As I brought Mary back to her room at the conclusion of our meeting, I caught my foot on the corner of the laundry cart in the hallway. One of the doctors walked by and shook his head, chuckling.

Just go with it, I thought.

TDWI Writer’s Group member, Margaret Cary, developed and teaches the Narrative Medicine/Personal Essay course at Georgetown University School of Medicine. Her students’ essays, such as this one, reflect their thoughts on being in medical school and becoming physicians.

Charles "Chuck" Casassa M.D. is currently a neurology resident at the Harvard/Beth Israel Deaconess Program. He graduated from Georgetown University School of Medicine in 2015. Prior to medical school, he graduated from Georgetown University with a B.A. in English. He has long maintained an interest in writing and believes that his humanities background offers a unique, balanced perspective in patient care.