How to Delay Age-Related Erectile Dysfunction 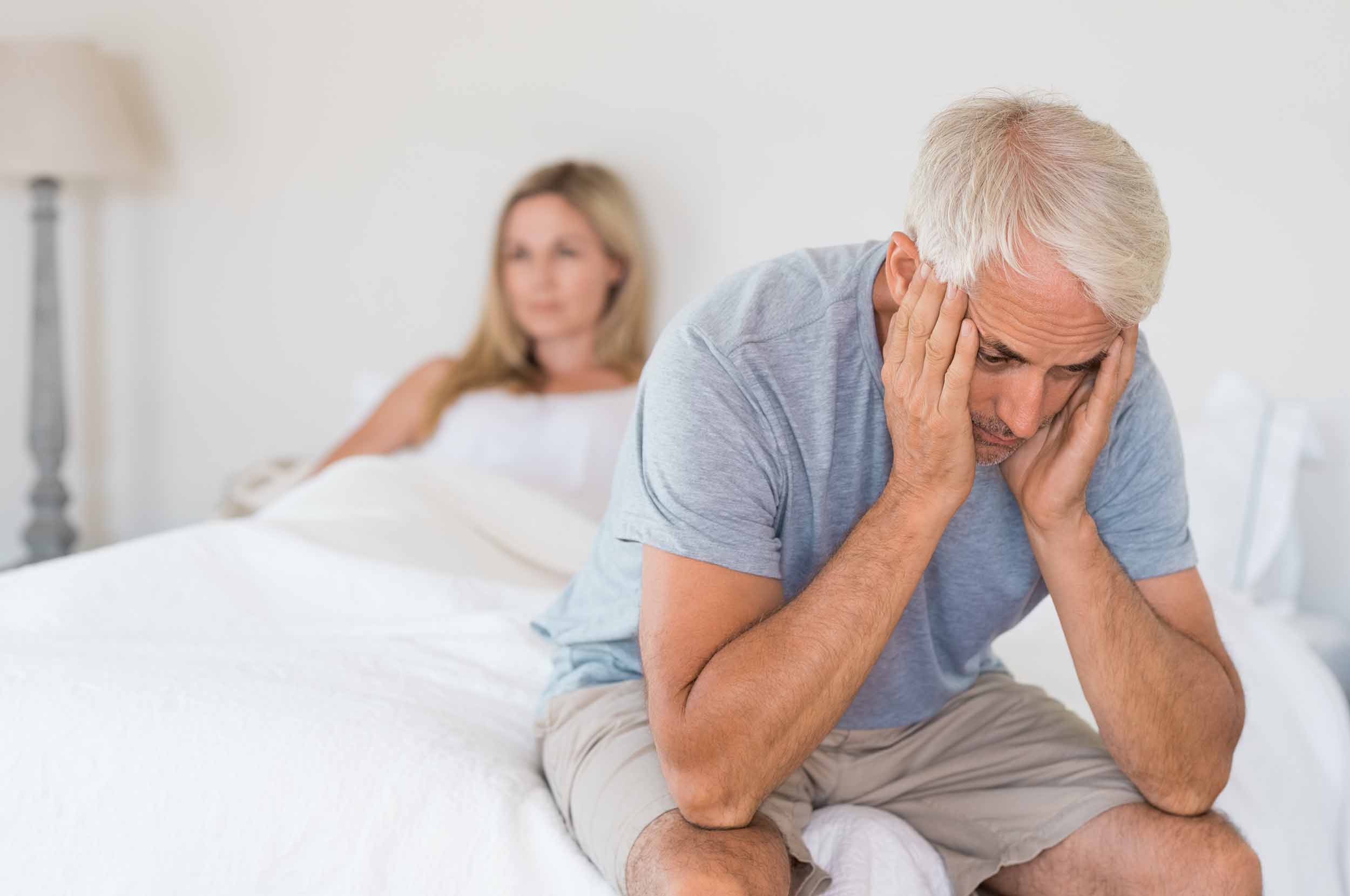 Sexual health is recognized by The World Health Organization as “an integral part of overall health, well being, and quality of life.” So why do so many men “hang it up” when we can’t keep it up? Perhaps we think we are just getting too old? It doesn’t have to be that way. Like general health, sexual health, including erectile dysfunction, typically declines with age. However, there are ways to slow down the process with a proactive strategy of “sexual anti-aging”.

So why does the flag fly at half-mast? An erection occurs when blood is pumped into two elongated chambers that create the shaft of the penis. As the blood pressure rises in the cylinders, they expand. When the pressure is high enough, they become hard, like an inflated tire.

The most common cause of a problem getting or keeping an erection is due to weak blood flow due to narrowing of the arteries.

Many conditions can lead to this including diabetes, high blood pressure, and heart disease. In fact, having trouble getting an erection may be your first and only warning sign of a looming heart attack or stroke.

Your nerve endings atrophy over time, so your penis will become less sensitive with age. This should come as no surprise considering that all our senses dim as we get older. The drop off is gradual so for most of us, we don’t really notice it as it’s happening. But over time it’s normal to require more stimulation to get and keep an erection as well as to reach sexual climax.

If you have other medical causes of erectile dysfunction, the decreased sensitivity adds insult to injury. There are specialized vibrators to consider which are designed to heighten stimulation just prior to intercourse.

Not everyone, but most men will make less and less testosterone over time. Testosterone is important for sexual desire as well as helping the nerves and blood vessels to function optimally.

Too little sleep[1] or sleep apnea[2] reduces your body’s natural production of testosterone. Early to bed, early to “rise.” There are many men who require testosterone supplementation to restore them to normal levels. Fortunately, this can be done very safely with proper medical supervision. This is typically in the form of an injection or a gel or lotion that is rubbed on the skin.

From the day you enter this life, your cells are under attack from a process called oxidation. This is the same process that causes steel to rust. The attack comes from molecules called “free radicals.”

Molecules known as “antioxidants” are naturally produced to block those free radicals from doing their damage. One of the key anti-oxidants is Nitric Oxide (NO). It is produced from the very innermost lining of the blood vessels called the “endothelium.”

As you age, your ability to both produce nitric oxide and to benefit from it declines. Scientists call this “endothelial dysfunction.” Poor food choices, bad habits such as smoking and being sedentary, as well as toxins in our environment all dump more free radicals into our system.

This process occurs as early as the late 20s in men but isn’t typically noticeable until their 40s. By then about 40 percent of men will have some degree of an erection problem, usually on the milder side.

What are potential ways to halt or delay the onset of age-related erectile dysfunction?

A comprehensive review of age-related erectile dysfunction was published in the journal Translational Andrology and Urology. It sheds light on the topic of delaying the onset of ED: [4]

Good nutrition and exercise are key to slowing the ravages of time. Fresh, unprocessed vegetables, fruits, nuts, legumes, and whole grains are the best food sources of nitrates and thousands of other molecules many of which are key “antioxidants” which counteract the aging process. Nitrates are converted to NO in the blood and along with antioxidants work at the level of the cell’s mitochondria to stave off age-related damage to the smooth muscle of the blood vessels.

Regular exercise also triggers the release of NO and other antioxidants[5]. Excess fat, on the other hand, releases toxic free radicals so staying lean is key as well. Most of my very advanced aged patients are “skinny old men.” Excess fat can also reduce testosterone levels by turning it into estrogens, the female hormones.

Although the penis isn’t a muscle, there are muscles around the base of the penis that automatically squeeze to keep the blood trapped in the erection and also during ejaculation. These muscles get weaker with age. You can pump them up with Kegel “squeezes”. This is the same move you make when you are trying to hold back your urine, but you do it on purpose several times in a row several times a day.

Nutritional supplements may have a role as well. In fact, certain Brazilian plants have been touted to boost erections for years. A research team at UCLA studied a combination supplement of ginger with two other plant sources from the Amazon. These included:

After aging rats were given the supplement, the researchers examined tissue in their penis. They found that the smooth muscles in the blood vessels looked the same or even better than in younger rats![6]

Human preclinical studies with this combination, known as Revactin, have shown that it boosts NO production in human penis tissue. There was also a statistically significant increase in self-reported sexual function in men taking it over several months[7].

For many, the changes in sexual function with age will require medication and, for a few, even surgery. Fortunately, these treatments are very safe and very effective. Prescription medications for erectile dysfunction may have different side effects but they all work in the same way. They increase the effect of NO in the penis blood vessels. They work for about 65% of men.

For most of the remaining men, erections can be restored with an injection or a urethral suppository whose main ingredient, prostaglandin, also boosts NO in the penis.

A vacuum erection device can also be placed temporarily on the penis to draw blood in and make it erect. Further, surgical implants are an excellent solution when other treatments don’t work.

The sooner you put into practice good nutrition and exercise the sooner you can claw back some time and delay age-related erectile dysfunction. It’s never “too late.” However, the fact is that the body takes time to repair itself. Also, there is some degree of deterioration that is simply not reversible. When this occurs, medications and surgical options are available.

As one of my colleagues once quipped,

“Nothing in life is certain except death, taxes, and erections-if you really  want them.”

**LOVE OUR CONTENT? WANT MORE INFORMATION ON ERECTILE DYSFUNCTION  AND HEALTHY LIVING?  SIGN UP FOR OUR WEEKLY NEWSLETTER HERE**

Editor’s note: This post was originally published in November 2018. It has been reviewed and updated for republication.

Aaron Spitz, M.D. is one of America's top urologists, and he serves as the chief representative for urologists to the American Medical Association (AMA), as well as immediate past president of the California Urological Association (CUA). He has served as an assistant clinical professor at UC Irvine's Department of Urology. He advocates on behalf of the many needs of his patients as well as across the nation. He has appeared on hundreds of TV and radio health reports, and in as many newspaper and magazine articles. He is a regularly featured expert on The Doctors daytime TV show. Dr. Spitz is a nationally recognized expert in male fertility and contraception, micro-surgical vasectomy reversal, low testosterone, erectile dysfunction, Peyronie's disease and telemedicine. He is involved in many clinical research trials, and has authored or co-authored numerous peer-reviewed journal articles. Dr.Spitz received his medical education at the Weill Cornell Medical College, New York, NY. He did his internship and residency at LA County and University of Southern California Medical Center, Los Angeles, CA, and did his fellowship at Baylor University College of Medicine, Scott Department of Urology, Houston, TX.