Emotional Abuse Made Me Feel Like I Was Crazy 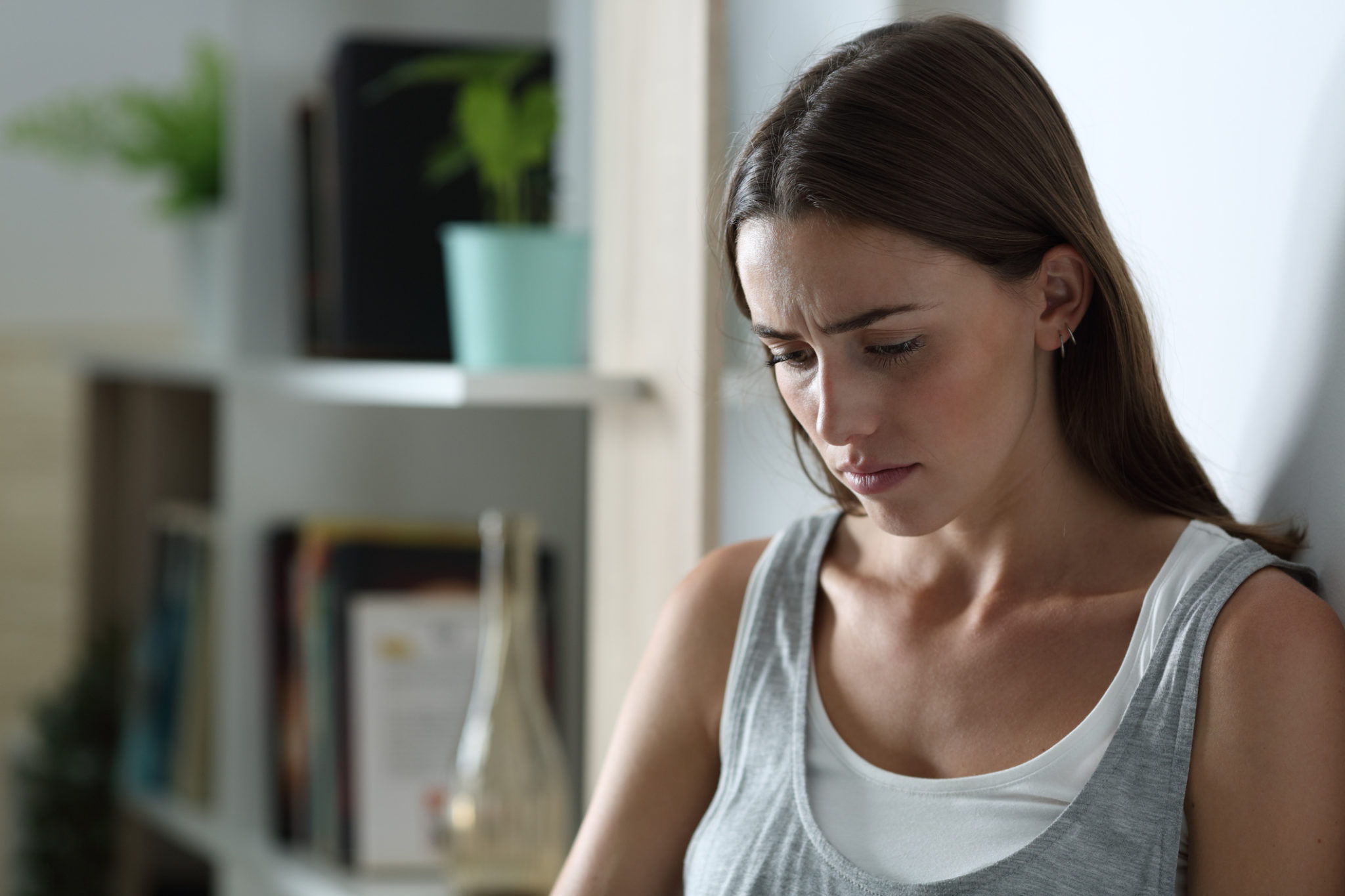 My fingers tremble as, knuckles white with force, I carve one last SLUT into the kitten calendar on Ally’s desk (that’s Ally with a “y” not an “ie”. I am not talking about myself in the third person).

Half blinded by sticky hot tears I fling open the closet and throw clothes all over the room. With a final burst of chaotic energy, I tear off the comforter on her bed, leaving the mattress halfway off the bed frame.

Standing in the sea of turquoise hangers and Ally’s multitude of cardigans, I stare in horror as regret turns hot tears cold. What have I done?

Greg, my ex, had just left, so in a haze, I unlock the door and shamble over to my room as thoughts swirl in my head:

Ally telling me she was upset when she and I were fighting a few months ago because Greg wouldn’t talk to her.

“I just felt like I lost my best friend when that happened. Him and I are close.”

She laughs as he flirts with her on the couch only a day after our two-year anniversary.

“You’re crazy Allie, nothing is going on with her and me”

They get out of her car, laughing with ice cream the night before the Super Bowl.

“You are reading into things. Nothing is happening with us. We weren’t even together that night. You’re insane.”

I sobbed on the floor the night of the Super Bowl after he had sent the cops to find me because he was concerned that I was suicidal.

“I can’t do this with you. You’re toxic, Allie. You’ve caused me so much depression.”

Forgetting that our apartment door opens with a keypad and not an actual key, I suddenly hear Greg enter again. He goes to Ally’s room and comes screaming back.

“What the HELL, Allie? Are you insane? I’m calling the cops.”

You’re good at that I think to myself.

Between sobs, I beg him not to. I didn’t mean it, I don’t even know what happened.

I said I was going to confront her. Greg refused to let me, following me to my apartment, barreling his way in. He physically restrained me. I got angrier and angrier as I tried to fight him. He yanked me all across the floor, almost dislocating my shoulder. The anger and fear blew up in her room.

I really was the crazy ex-girlfriend.

Greg didn’t call the cops, but he waited in my apartment until I called my parents to take me home because “I needed help.”

What you said was concerning

I called Ally myself, apologizing profusely between hiccupping sobs. I went back into her room and I cleaned up my mess before she saw it. Clothes back in the closet, the bed back on its frame, comforter back on the bed.

I paused at the kitten calendar before ripping off the top page as my shoulders slumped. But you could still see it, the echo of SLUT on the remaining months.

One day later, my dad and I fight the clock as we try to get my furniture moved out before band practice ends. I had talked to housing myself and asked to be moved. I played off of the fact that they already had to talk to me due to my “suicide scare” the night before during Super Bowl 2018.

“Well so, you see. I know this is dumb, but I just really wanted him to pay attention to me.”

“But you understand how what you said was concerning.”

“Officer, I don’t want to kill myself. I’m not suicidal. It’s just, I don’t know, I wanted him to care that he hurt me? I hoped my friends would not leave after hearing me cry all day. He wouldn’t even notice honestly. I only turned my phone off so that I’d stop trying to talk to all of them since they didn’t seem to care.”

Finally, I learn the truth

As my dad left that Tuesday night, my friend Henry, Greg’s roommate, came over to lend me a vacuum.

“I need to tell you something. You aren’t going to like it.” I brace myself against my new bed.

“Greg apparently hooked up with Ally.” He paused. “In January.”

That moment I expected to feel anger, but I just felt like someone had stabbed me in the chest. Then all of it, the frustration, anger, fear, confusion, just leaked out. I was right?

“He told me I was making it all up! He said I was crazy. I felt so bad for suspecting that they were sneaking around that night when she didn’t come to say goodbye before I left. I’ve felt guilty about thinking that of her for all this time. But I was fucking right”.

“I’m so sorry, Allie. They were shitty people to do that to you.”

Emotional abuse made me question myself and my sanity

I had so many questions. About myself, about my sanity, and about my innate goodness as a person. He traded one Allie/Ally for another one. Our bedrooms had shared a wall and much like we shared a name we shared the same major, neuroscience. Not to be conceited but I was prettier, I was smarter, and I was nicer (usually). What did she have that I didn’t?

“Allie. You apologized. Many times, even. You cleaned it up before she even saw it. You feel bad and that means you aren’t a bad person. I mean he dragged you across the floor!”

Andrew, my new counselor I agreed to talk to at housing’s request (potential suicidal ideations, remember?), sighs as I frown again.

“But I was insane! I can’t believe I did that. I mean, he was right, right? I’m terrible. If he ever tells on me, oh, gosh, I could lose medical school. Even my parents were afraid my anger would explode like this someday. I suck.”

Andrew gives a small smile before he says, “Allie, do you know what the cycle of abuse is?”

I blanch because, of course, I know what it is and, of course, I would know better than to stay in an abusive relationship. He continues:

And at that moment, it dawns on me.

Shaking as I kneel next to him after the wild goose chase across campus to find him thinking he would kill himself. He would only talk to me and that’s how it all started…

“I’m sorry I messed up, Allie, I’ll do better. Please give me another chance.”

“You made me this way Allie. It was all your fault, you just pushed me too far.”

“If YOU got help, we could maybe reevaluate.”

“You’re the crazy one, Allie. It wasn’t cheating, we were broken up. I didn’t cheat. I did nothing wrong and you have NOTHING to be upset about. You have no reason to cry about any of this.”

And then my best friend, Lacy:

“Dude. You got fucking gaslighted. They are literally playing with you and enjoying seeing you blow up.”

Andrew is looking at me.

“I don’t know Greg or Ally. But I do know you. And you’re here. You feel bad. You want to change. And from what you have said, they don’t. He was physically restraining you and making you doubt your reality. You had a pretty normal reaction.”

As tears prick the back of my eyes. I look at Andrew again.

Normal? No one has ever validated my feelings like that before…

You may also want to read:
Anxiety Disorders: Everything You Need to Know
Seizing Permission to Live Life on Your Own Terms

Editor’s note: Here are some resources where you can learn more about emotional abuse:

Allie Johnson is a pseudonym created for the purposes of publishing this piece. She decided to publish this piece anonymously to protect the privacy of herself and those included in the story.

She wanted to share this real-life experience without fear of it impacting the lives of those who were a part of it. Since these events occurred, she has repaired relationships with some of the people involved and does not wish to harbor any negative feelings towards them.

Her hope is that by sharing this story it will help others like herself recognize the signs of an abusive relationship and to know that they are not alone.

Allie is very passionate about mental health and mental health awareness. Allie is currently in training to become a doctor at an institution on the east coast and is hoping to go into a pediatric specialty.

When she isn’t studying or listening to her classes she enjoys writing, reading, singing, and purchasing over-priced coffee from local coffee shops in her area. She also enjoys spending time with her cat, her friends, her family, and her boyfriend.