Does Acupuncture Work? What the Evidence Shows 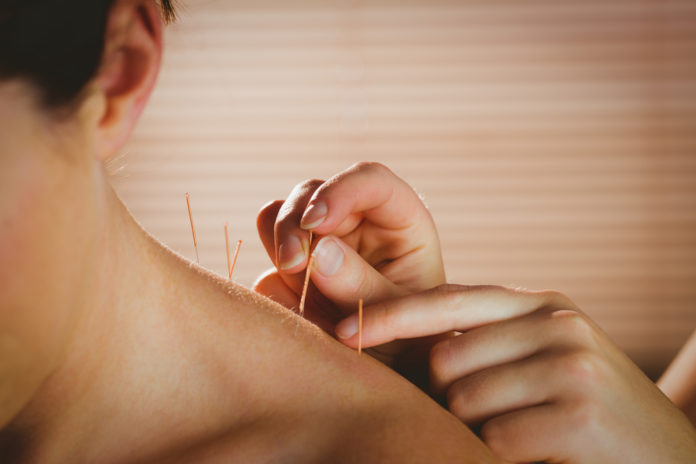 What do we know about acupuncture? The short answer: Very little. The longer answer: Not much, but the potential is intriguing.

Clinical studies, especially the well-designed RCTs (Randomized Controlled Trials) by definition deal with populations, not with personal anecdotes. So please, read the article to the end and spare me the poison pens, the likes of “are you a real doctor?“, “This treatment/supplement saved my life“, or “Shame on you. You sold out to the medical-pharmaceutical conspiracy!” “It made my semen thicker since I started taking it.” These are not made up quotes; I have actually received such comments.

A bit about acupuncture

Acupuncture is a technique in which practitioners insert thin needles in the skin at specific points in the body. The practice originated in China, most likely around 100 BC.

Early acupuncture beliefs relied on concepts that are common in traditional Chinese medicine, such as a life force energy called qi. Qi was believed to flow from the body’s primary organs (such as the heart, liver, GI tract, kidneys) to the “superficial” body tissues of the skin, muscles, tendons, bones, and joints, through channels called meridians. Acupuncture points where needles are inserted are mainly (but not always) found at locations along the meridians. Acupuncture points not found along a meridian are called extraordinary points and those with no designated site are called “A-shi” points.

Interestingly, the belief in qi and the practice of acupuncture slowly died out in China, not so much because of lack of scientific proof, but because it was associated with the lower classes and its practitioners were in less prestigious occupations such as alchemy, shamanism, and midwifery. But then politics came to the rescue. The popularity of acupuncture rebounded in 1949 when Mao Tse Tung took power and sought to unite China behind traditional cultural values, including traditional Chinese medicine.

Is there a scientific basis for acupuncture?

In a way, looking for a scientific basis for ancient theories is a bit unfair and certainly irrelevant. The ancient Chinese, just like the ancient Greeks, did not have the concept of empiricism in science. In fact, the circulatory system was discovered by William Harvey only in the 17th century. Until then, it was believed that the blood was moved by the lungs. Why? Because Galen, a second-century physician to the gladiator school in Pergamum said so—and for 1,500 years nobody bothered to check!

How about Qi? In the 18th and 19th centuries, vitalism was discussed by various biologists. There were arguments between those who felt that the known mechanics of physics would eventually explain the difference between life and non-life and the vitalists who thought that life could not be reduced to a mechanistic process. So is vitalism finally dead? If you read or listen to New Age-speak you realize that the concept of “life-force” or “energy” is still alive and well.

Before digging into the scientific literature on the clinical benefits of acupuncture for specific conditions, let me insert a word of caution: consider the source. A review of studies on acupuncture found that trials originating in China, Japan, Hong Kong, and Taiwan were uniformly favorable to acupuncture, as were ten out of eleven studies conducted in Russia.

The same study found that, methodologically, Chinese studies were inferior to Western trials. And lest you believe that “fake news” was invented by president Trump, scientist and journalist Steven Salzberg identifies acupuncture and Chinese medicine generally as a focus for “fake medical journals”</a,> such as the Journal of Acupuncture and Meridian Studies and Acupuncture in Medicine.

Nature magazine, a top-tier biomedical journal, described acupuncture and traditional Chinese medicine in general as “fraught with pseudoscience” with the majority of its treatments having no logical mechanism of action.

Are there any pearls to be found in the garbage?

I am not going to deal with conditions that the Cochrane Reviews, the gold standard of clinical knowledge, found to be ineffective, such as Alzheimer’s disease, insomnia, obesity, irritable bowel syndrome, whiplash, dry eyes, tinnitus, among many others. The main use of acupuncture has to do with specific causes of pain.

The Acupuncture Trialists’ Collaboration (not exactly a disinterested group) published the results of their meta-analysis, an update of a previous analysis. They found acupuncture to be moderately superior to sham acupuncture for non-specific musculoskeletal pain, osteoarthritis, chronic headache, and shoulder pain. They also found that the effects of acupuncture decreased by about 15% after one year. A review in Autonomic Neuroscience, among several other reviews, failed to show a difference between sham and real acupuncture.

Related Content:  The Best Ways To Treat Back Pain Without Drugs

Are there really no studies that show benefit?

Some positive reports are showing up and the good news is that they are of good quality.

Dr. Dawn Hershman of Columbia Medical Center in New York and her colleagues ran a well-designed (probably the best so far in the acupuncture field) study, narrowly focused on hormone receptor-positive (HR+) early stage breast cancers. HR+ tumors rely on estrogen to fuel their growth. To reduce the risk of cancer recurrence, patients take aromatase inhibitors after surgery. These drugs, which block estrogen production, are also used to prevent breast cancer in postmenopausal women at high risk for the disease and to treat HR-positive metastatic breast cancer. In a statement to the National Cancer Institute blog, Dr. Hershman described the problem: “About 50% of patients on these medications complain of some joint pain or stiffness, and about half of those patients describe the pain as severe.”

The 226 women in the trial were all taking a third-generation aromatase inhibitor—anastrozole (Arimidex®), letrozole (Femara®), or exemestane (Aromasin®) after surgery for early-stage HR-positive breast cancer. They were randomly assigned to receive true acupuncture, sham acupuncture (placebo), or no treatment. Sham acupuncture involves shallow insertion of short, thin needles at non-acupuncture points.

Roughly half of the study participants (110) received true acupuncture twice a week for 6 weeks, followed by once-a-week maintenance sessions for 6 more weeks. The other half were in one of two control groups: 59 received sham acupuncture on the same schedule as the true acupuncture group, and the remaining 57 received no treatment.

Study investigators followed the women for another 12 weeks after treatments ended. Patients reported on their pain before, during, and after treatment using various methods, including a questionnaire on which women could indicate a rating of “worst pain” on a scale of 0 to 10.

And the results: The NCI blog quotes Dr. Hershman saying,

“After 6 weeks, we saw a mean two-point reduction of worst pain [in the true-acupuncture group compared with worst pain before treatment], which is a major reduction, and these effects were maintained after 12 weeks.”

Moreover, she added that “even at 24 weeks, women in the true-acupuncture group had less pain overall than women in either [control] group.”

A 2-point drop may sound trivial, but in fact, it is clinically very significant. It may make the difference between patients “not taking it anymore” and discontinuing the treatment, and being able to tolerate the pain and staying on the life-saving drug.

So now we have objective evidence of the efficacy of acupuncture over and above the placebo effect. But what’s wrong with placebo in the first place? There is ample evidence showing that neurohormonal changes occur in the brains of patients who react to a placebo treatment. So why does it matter to a clinician whether the effect is due to a painkiller affecting pain pathways in the brain, or due to endorphins generated by the brain and accomplishing the same effect? It doesn’t.

In fact, I would propose that it is time to “re-litigate” many of the negative trials that showed no significant effect over placebo. If the patients felt better, why deprive them of relief? Instead, let’s investigate why they got pain relief. It may turn out that they are more prone to releasing endorphins, or dopamine, secondary to activation of the somatosensory cortex, which is known to ‘light up’ due to any skin stimulation, being light touch or a needle stick. The somatosensory cortex has extensive connections to various regions in the brain, including the limbic system (aka the reward system). If you enjoyed a massage, or just a hug with a loved one, you activated your limbic system via the somatosensory cortex. If this is “just” a placebo effect, I’d still take it.