For the first time since May 8, 1945, the day in which Germany surrendered to the Allies, the world finds itself fighting a global war. But this world war is different. The battles aren’t pitting one country against the next or one religion versus another. Rather, this war features all of humanity fighting against an invisible enemy. That enemy is SARS-COV-2,  a novel coronavirus that has so far infected millions and killed tens of thousands across more than 130 countries. This is a war exacerbated by the actions of mankind, yet a war not entirely of mankind’s fault. One thing is clear though, defeating COVID-19 requires a 21st military-grade defense system.

How Britain used data to turn the tides of war

In 1940, five years before the allies liberated Europe, the British Royal Air Force found itself under constant threat from the Luftwaffe, the German air force.

With the Nazis having conquered most of Europe, the British were determined to maintain their sovereignty and defeat fascism. To help, British Intelligence began to secretly build an advanced early detection radar system, known as the Dowding System.

The Dowding System is commonly described as “the world’s first wide-area ground-controlled interception network. Its mission was simple: to provide advanced notice of German air raids.

What is the Dowding System?

The Dowding System consisted of innovative radar technology and human reconnaissance. It was a “unified system of defense” that could collect and analyze both quantitative and contextual data in near real-time, such as aircraft proximity, trajectory, type, and formation.

Access to such specific information enabled the British to optimize military preparedness and ready retaliatory tactics It also helped them prepare civilian populations when necessary. The Dowding System was a game-changer and it helped turn the tides of the war.

According to the British Imperial War Museum,

“The Dowding System could process huge amounts of information very quickly. It was a significant part of British success in the Battle of Britain. It gave Britain’s fighter defenses enough advanced warning to prepare for and intercept raids and allowed Fighter Command to manage its valuable – and relatively limited – resources, making sure they were not wasted.”

Fast forward 80 years, the lessons of The Dowding System are invaluable to the war against COVID-19. An advanced warning system that allows the healthcare system and local and state governments to better prepare defenses and retaliatory tactics are exactly what’s needed. Fortunately, unlike World War II, we don’t need an intelligence agency to get it done.

Often overlooked in importance, clinical labs play a significant role in the ongoing battle against COVID-19. To help flatten the infection curve, modern-day hospital systems, public health officials and government organizations have an urgent need for immediate access to data that can only be derived from lab test results.

In fact, near real-time visibility into aggregate lab testing data could potentially help health professionals predict the next wave of emergency room, hospital, and intensive care unit (ICU) overload 5-21 days sooner than they can today.

Akin to how The Dowding System empowered the British to anticipate and prepare for German raids, a COVID-19 early warning system could enable those on the front lines to finally transition away from a constant state of reaction to a state of proactive mitigation.

Today, at least 70% of treatment decisions are informed primarily by lab results. According to my colleague Brad Bostic,

This holds true for COVID-19. The more information we know, and the faster we know it, the better we can treat patients and warn others whom they might have come in contact with to take precautions.

But an advanced warning system isn’t solely about doctors treating patients. It’s about the overall health response. If the public knows what is going on in their own community, they can then pay better attention to social distancing recommendations and take the necessary precautions.

Today, such a system has been developed. Using data from more than 20,000 lab ordering locations to provide dynamic visualizations of COVID-19 testing rates, a new dashboard has been developed analyzing data from 19 billion lab tests and counting. It makes it possible to show coronavirus positive and negative test results and key demographic filters, such as age and gender, down to the county level.

The tool also includes a Local Risk Index that delivers at-a-glance analysis of accelerating or decelerating COVID-19 infection rates by county and Public Use Microdata Area. Thus making it the fastest way to identify emerging spread and control of the disease in America’s communities.

The value of this dashboard increases with each lab partner that joins the mission. Imagine if every accredited lab in the country were to share their COVID-19 lab testing results. The response to the pandemic could be accelerated by several weeks, because health leaders, professionals, and providers could see the surge of patient volume coming weeks in advance. Just like British civilians were able to do thanks to The Dowding System.

The bottom line: we need a military-grade defense system against COVID-19

The power of the nation’s lab data as a whole is exponentially more valuable than trends derived separately for each individual lab. Delivering real-time insights from laboratory testing for COVID-19 – and future health crises – is not a nice-to-have. It is an urgent need. Today, we have our 21st Century Dowding System. And we’re better prepared to fight this invisible enemy.

Using existing data feeds from more than 20,000 lab testing sites around the country, hc1, has constructed an interactive map of COVID-19 diagnostic test results. hc1’s core business is translating lab data into personal insights for patients. They receive almost real-time data feeds (1 hour to a couple of days) from labs in all 50 states and in almost all of the counties in the country. 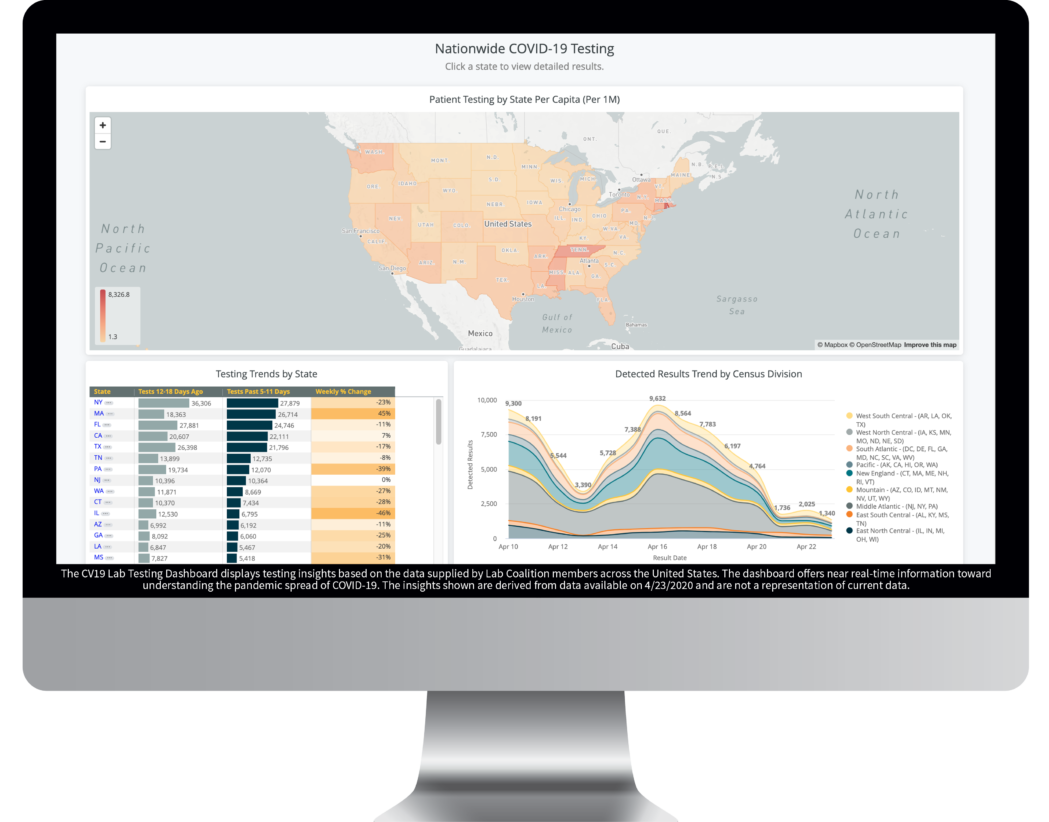 With respect to data from the COVID-19 diagnostic tests, they receive information about whether the test is positive or not. And also information about the patient (age, gender, zip code where they live or received the test).

Also included in the dashboard is a Local Risk Index (LRI) that highlights hot spots where the virus is accelerating in a dramatic way. If the LRI is falling then the virus spread is decelerating within the selected population area.

All of this information has been organized into maps and graphs that can be queried. For example, public health officials could query the database to find out the number of tests, results, and age ranges of those tested. Since older people are more likely than younger ones to require time in the ICU, this information could be used by public health officials to plan for what is coming down the pike.

Further, this data from the Hc1 dashboard can eventually be combined with other tracking data sources to create a comprehensive look at the course of the epidemic – truly a 21st Century Dowding System.

Unfortunately, most areas of the country are not where they should be in terms of widespread testing. Therefore, one limitation of the database right now is that low numbers of cases may reflect limited testing rather than the number of people who will actually end up needing intensive medical services in the short run. This short-coming should improve as testing becomes more widespread. [Patricia Salber, MD, Editor-in-Chief]

More Content on COVID19:
How to Stay Safe and Sane in the COVID-19 Age
COVID-19: Key Elements for Optimal Protection of Healthcare Workers
Telehealth Project to Help Atrial Fibrillation Patients During the COVID Crisis
Greater Risk of Blood Clots in COVID-19 Patients