Children’s Screen Time: How Much Is Too Much? 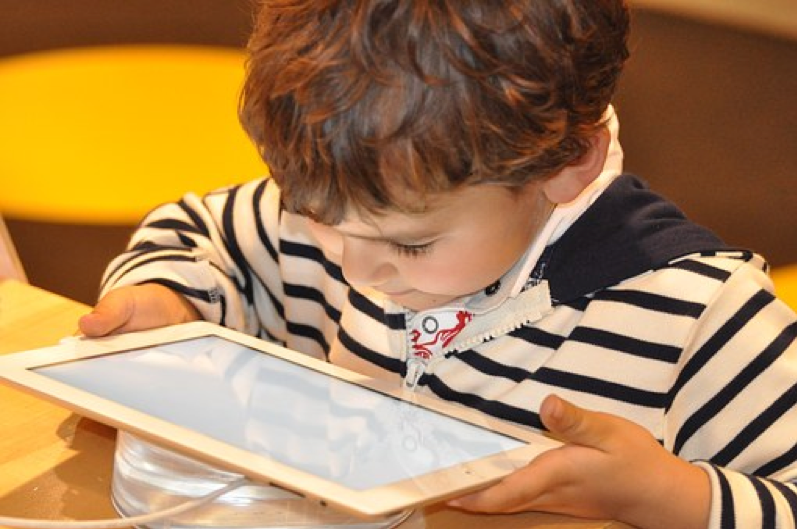 Technological innovations provide us with valuable tools that improve our productivity and access to knowledge on a daily basis. School-aged children are benefiting from living in an age of information, where everything that you could ever want to know is available at your fingertips.

Computers, tablets, and smartphones are ever present, offering not only information but also endless entertainment. Finding the right balance between screen time and life in the “real world” is a true balancing act for parents who want their children to be tech-savvy but also have an appreciation for the world around them and a foundation in exercise and the arts.

Television and video games are as enticing to children as ever before and can be played on nearly every smartphone. In a recent Pew Research Center survey, it was found that three-quarters of all teens have their own smartphone.

If left to their own devices, it is possible that parents may rarely have a face-to-face conversation with a child. Although screen time may be a very useful tool in our child’s classroom, limiting screen time outside of education will likely be met with some pushback due to the prevalence of the devices.

Technology is changing the way our childern live

Technology is changing the way our children live in dramatic ways. Two generations prior saw the development of the atomic bomb, color television, and treatments for a number of different diseases.

The younger generation now has access to the deepest reaches of the internet, where many different kinds of software and apps help to make tasks easier for the user. Still, dangers lurk around many corners in the digital frontier, requiring parents to be vigilant in a space where they may not have complete access to what their children do.

Spell check on our word processors and autocorrect on our smartphones has decreased our ability to spell many words on our own. As technology continues to advance to include voice dictation that enables students to no longer have to type their own papers, it could backfire on our younger generation.

What about 10 years from now: Will parents wonder if 3D printing and driverless cars make lives better or will our children just become spoiled and lazy?

The more that we rely on technology, the easier it is to lose some of the skills associated with the tasks that apps, software and artificial intelligence take on for us.

Take notice of how much time your child is spending with a screen in front of their face to assess if their reliance on technology has become an addiction issue that needs to be addressed. The University of Michigan identified warning signs of media addiction and are as follows:

Smartphone usage is at an all-time high, and kids are spending more and more time on their cellular devices. Mobile web usage is increasing dramatically. Creating new sites that are mobile friendly is now a must and no longer a second thought to web designers.

As a result, many people, including children, are complaining of neck pain from hunching over their screens to scroll the infinite number of websites available to them. Ergonomics are rarely taught in schools, or even offices, meaning few know how to deal with these emerging problems.

In addition to neck pain, excessive screen time can also cause strain on other parts of the body including fingers, wrists, and back. There is also evidence of narrowing of blood vessels in the eye as a result of too much blue-light exposure.

It is not only causing physical harm, but it also ricochets into other aspects of their lives as well, such as their academic work. According to The American Journal of Family Therapy, hours of daily screen time is linked to an average full-grade-level drop in a student’s GPA.

Consider limiting your child’s screen time from a young age in an attempt to deter them from relying too heavily on technology. It is recommended by the Mayo Clinic that children under two years old are not exposed to backlit screens at all.

Young children and teens should be limited to one to two hours of quality content per day. It falls on parents to determine which content is best suited to development and which is simply entertainment.

Limiting screen time can lead to changing lifestyle habits and adopting healthier ones. For some children, it is a simple solution to put down the tablet and pick up a book.

Reading can increase literacy and vocabulary, as well as provoke the imagination in similar ways that video games engage them. It can lead to an interest in writing or content creation and a greater appreciation of the arts as a whole.

For other children, limiting screen time is valuable in getting your child moving and active. Research has found that kindergartners that were allowed more than an hour of television time per day are 72 percent more likely to be obese than their classmates that had limited screen time. To eliminate the sedentary lifestyle associated with screen time, enroll them in a team sport or exercise regularly as a family.

To help your children foster a healthy relationship with technology and screen time, set boundaries revolving around the use of devices using the following techniques:

Communicating with your children about the potential distractions they will encounter, such as the lure of screens and devices, will help to establish a better understanding of healthy use habits early on in life. Try your best to emphasize minimal use when not needed for school.

Furthermore, denying your children any recreational time with their smartphones or television may only result in them wanting it even more. Establish healthy boundaries and regulate their use to best suit their wants and developmental needs.