Why a Liver Donation May One Day Save My Life 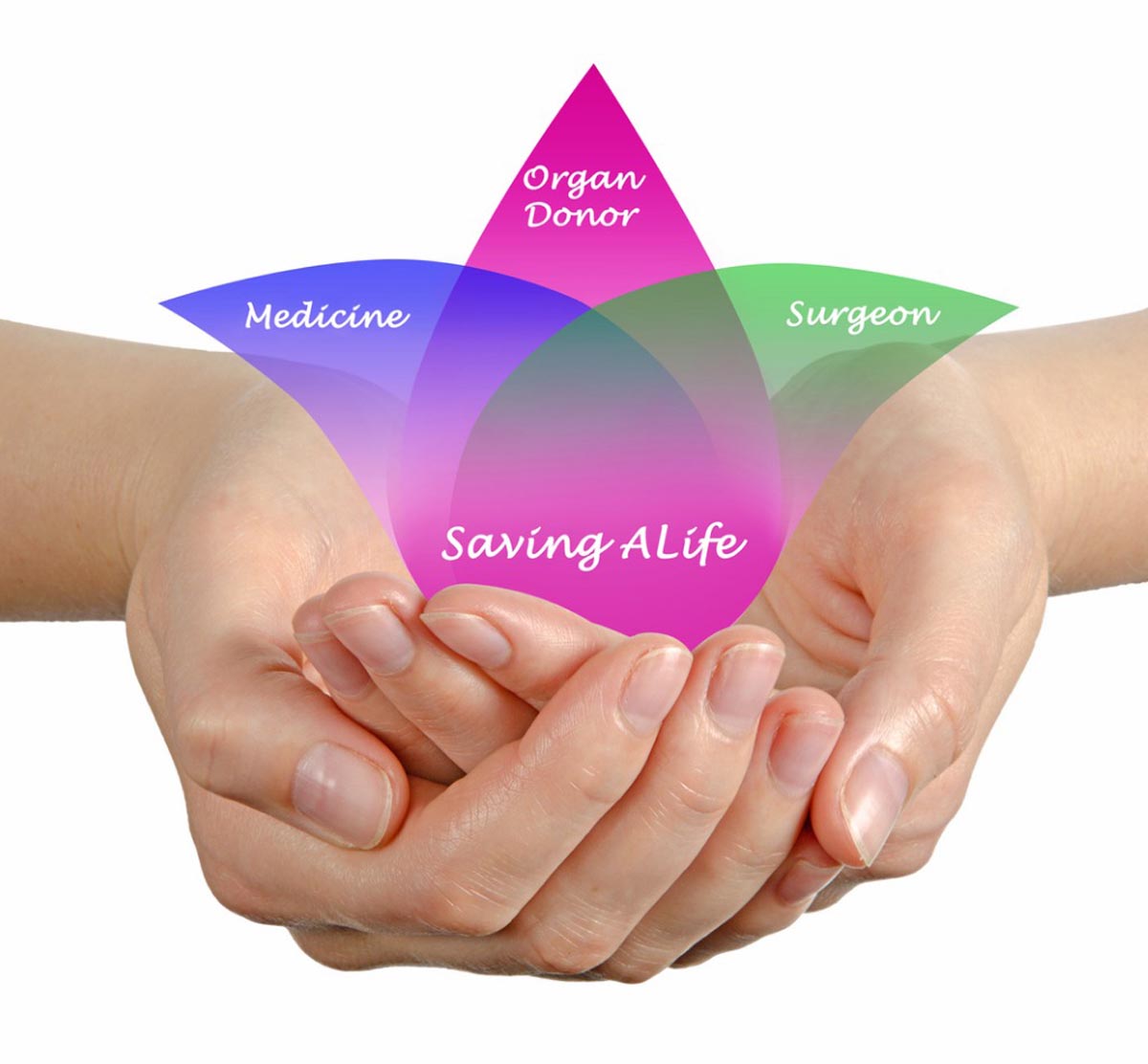 At my two week checkup, the nurse and my mom noticed that I was jaundiced. The doctors quickly diagnosed me with biliary atresia (BA), a rare liver disease that occurs in newborn infants.

I was, according to Cincinnati Children’s Hospital, “one in 15,000 to 20,000 babies” born with biliary atresia. My parents were very worried about my deteriorating health. And, my mom was very emotional because she thought she had done something wrong in her pregnancy that caused me to be increasingly sick. The doctors assured her that her pregnancy was completely normal and that it was not her fault. Nobody, not even doctors, have determined the cause of the disorder.

What is the cause of biliary atresia?

The cause of biliary atresia is unknown, but it is not genetically inherited from the mother or any other family members. Researchers at the University of California San Francisco have hypothesized that a prenatal or early postnatal event such as “infection with a virus or bacterium, a problem with the immune system, an abnormal bile component, or an error in the development of the liver and bile ducts” could trigger the disease.

One of the main symptoms of BA is jaundice. Jaundice is a yellow discoloration of the infant’s skin or the whites of his/her eyes. Jaundice is caused by a buildup of bile, a yellow colored substance produced by the liver that helps with the digestion of fat.

Bile also helps with the removal of waste products from the liver. Ordinarily, bile is moved from the liver by the biliary system of channels and ducts to the gallbladder and eventually from the gallbladder to the small intestine. Infants with biliary atresia are unable to do that which leads to significant jaundice. Jaundice generally occurs in the infant in the first couple of weeks after birth and continues to worsen as time goes by. 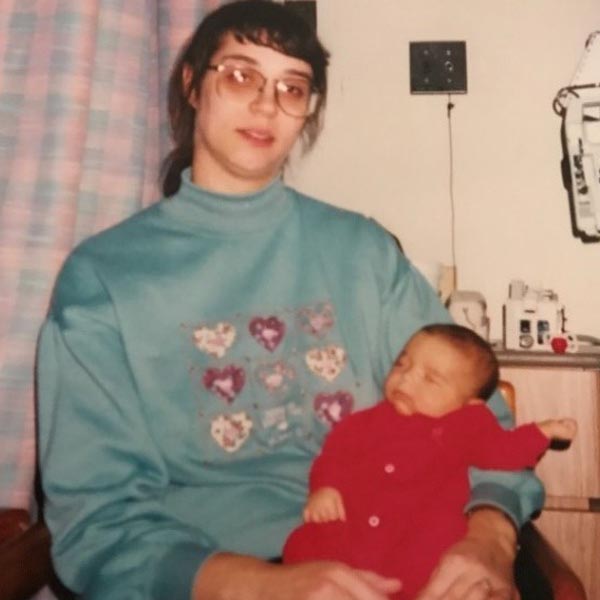 My mom and me a few days following my Kasai procedure.

Five weeks after birth, on December 19, 1997, I underwent the Kasai procedure at Lutheran General Children’s Hospital to help restore my bile flow from my liver to my small intestines.

I did not find out until a couple of years ago that my Kasai procedure, as performed by my surgeons, was a cutting-edge surgery in 1997.

The Kasai procedure is only a treatment.  It is not a cure.  There can be complications with this surgery that make it unsuccessful. The younger the infant is when the Kasai is performed, the more successful it is. 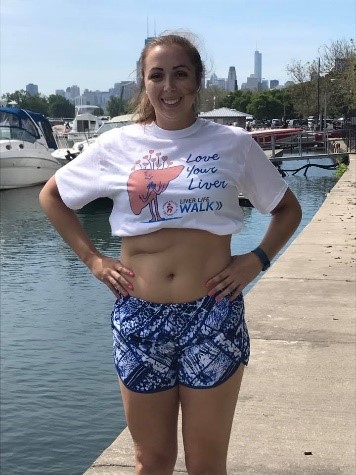 Proudly displaying my scar after the Liver Walk.

During the summer of 2017, I walked for the first time in the American Liver Foundation’s Liver Walk in Chicago.

Within the following weeks, I became very sick. Every time that I ate, I was in severe pain. When my pain became unbearable, I went to the emergency room at Mercy Hospital in Aurora, Illinois only to be diagnosed with constipation. Little did the doctors know that there was a more serious issue that was causing my pain.

Two days after my visit to the ER, I woke up in the middle of the night with excruciating pain. This pain was the worst pain I had ever experienced. I ranked the pain level as a ten out of ten.

Unfortunately, at that point in time, I was not at home because I was working a softball tournament in Milwaukee, Wisconsin. I called my parents at 5:00 A.M. to come and get me and take me to the emergency room.

My parents rushed from Batavia, Illinois to Milwaukee, Wisconsin to pick me up.  As we were driving from Milwaukee, to Mercy Hospital, in Aurora, Illinois I started throwing up in the car. After we arrived at the hospital, the doctors ran several tests, and they determined that my liver was very sick and that there was a blockage. They did not know exactly what was causing the blockage between my liver and small intestines. I was transported, by ambulance, to Lutheran General Hospital where my specialists were.

I was there less than 24 hours.  They discovered that I had a biliary stone the size of a golf ball near my liver that had developed over a period of 10 years.  This stone blocked the passageway for digestion.

At this point, I knew I was going to have surgery. Lutheran General could not operate on my liver because it would have been too risky and I could have gone into liver failure. Only a liver transplant unit could handle my case and only liver transplant doctors could do the surgery.

Every doctor knew my disease

I was then transported, by ambulance, to Northwestern Hospital.  After I arrived there, I knew I was in the right hospital because every doctor knew my disease and they were confident that they could operate on me.

Northwestern’s liver transplant doctors performed surgery and removed the golf ball sized stone near my liver to restore digestion flow.  Luckily, they were able to use the same incision from my Kasai procedure when I was five weeks old.

My second surgery was performed on June 26, 2017.  I was in the hospital for about a week. 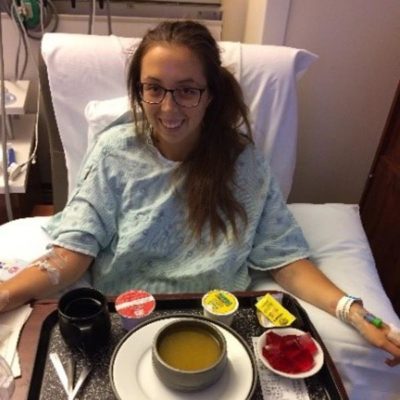 Happiness is my first meal after the surgery

The unfortunate part of my hospitalization was that I had to miss being the maid of honor at my sister’s wedding.  After surgery, I had four months of physical therapy to help me get stronger and to prepare me for my return to college softball. I am currently doing well, and I am thankful I had the doctors that I did to make me better! I would not be as healthy as I am today if it were not for their expertise.

Because my Kasai procedure was successful, I am considered unique. According to Children’s Hospital of Philadelphia, the “overall survival with a native liver (not transplanted) ranges from 30-55 percent at 5 years of age; and 30-40 percent at 10 years of age. It is thought that approximately 80 percent of patients with biliary atresia will require liver transplantation by the age of 20.”

Most infants that undergo the Kasai surgery have a transplant within three months after surgery. I am the exception to the rule. The liver transplant doctors at Northwestern Hospital that performed my second surgery said that I am in uncharted territory. They have no idea what will happen to me in terms of my liver disease because there are very few individuals that have made it past the age of 20 without a liver transplant. I am a rare case and the lucky one.

Because I know there is a chance that I will have a liver transplant in my lifetime, I encourage others to become organ donors. The ratio of viable organs that are available to wait-listed individuals varies/differs greatly.

According to U.S. Government Information on Organ Donation and Transplantation, in August 2017, 114,000 men, women, and children were on the national transplant waiting list. Of those 114,000, only 34,770 transplants were performed in 2017.

As a result of only a fraction of individuals receiving liver transplants each year, an estimated average of 20 patients die each day awaiting a transplant. The reason individuals need to register to be an organ donor is that 95% of U.S. adults support organ donation, but only 54% are signed up as donors.

Every 10 minutes another person is added to the waiting list. Just one donor could save eight lives through the donation of a heart, two lungs, liver, pancreas, two kidneys, and intestines.

The myths of organ donation

Individuals who choose not to become designated organ donors have three main reasons for not doing so:

The truth about organ donation

Nonetheless, these theories of individuals against organ donation are not true for the following reasons.

If individuals are under 18 years old and they want to register as organ donors, they can tell their family about their wishes.

If individuals are older and not as healthy, they are still able to be organ donors. They do not rule out organs just because they are older.

Medical professions cannot determine if organs are unsuitable until they run tests to see if they meet the required standards for an organ donor. The more organs there are available, the more lives that can be saved.

Throughout my life, I was always afraid to tell my story, but freshman year of college I had a breakthrough. I started realizing that this liver disease is a part of who I am. I need to embrace it and start sharing my story.

An organ could save my life in the future, so I hope that you will take the initiative, do what is right, and become an organ donor.

Alyssa Klemm is a junior at North Central College pursuing a B.A. Accounting degree. She is currently a tax intern at Aldi Corporate USA in Batavia, Illinois. She plans to stay an extra year to pursue a Master of Financial Management. Alyssa was born with a rare liver disease called Biliary Atresia. Throughout her life, she has always been afraid to tell her story, but during her freshman year of college, she had a breakthrough. She started realizing that this liver disease is who she is, and she needed to embrace it and start sharing her story. She started sharing her story on her social media and began raising money for the America Liver Foundation. She walked for the first time in the American Liver Foundation’s Liver Walk in Chicago, Illinois and she raised over a thousand dollars. Even though she is an exception and one of the few with Biliary Atresia that has yet to receive a liver transplant, she wants to spread awareness for all of those with her disease that had a liver transplant. And who knows, a liver transplant could still be in her future. Looking back at her second surgery, she realized that she wanted to spread information about organ donation to increase awareness. She believes everyone should be registered as an organ donor. In her advanced writing class, she talked to an author named B.J Hollars. B.J. asked her, “What would you write about if you were not afraid?” Once she heard him ask that she got the chills, she knew what she wanted to write about for her last paper.