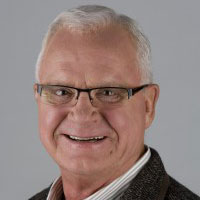 is a board-certified psychiatrist who obtained his medical degree from the University of Nebraska Medical Center in Omaha, Nebraska, in 1968. He spent four years in the United States Navy as a Flight Surgeon. After his discharge from the military, he completed a psychiatric residency at Maine Medical Center in Portland, Maine.