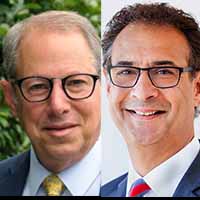 Brian Klepper, Ph.D. is a Principal of Worksite Health Advisors and a nationally prominent health care analyst and commentator. He speaks, writes, and advises extensively on high-performance health care, primary care clinics, and the management of clinical and financial risk.

A purchaser advocate, he has focused on the market and policy dynamics of the health care cost crisis and readily available solutions to purchasers willing to approach the problem laterally. His current focus is on high performing health care organizations that consistently deliver better health outcomes at a lower cost than conventional approaches in high-value niches.

Dr. Klepper has been involved in several transformative health care efforts favoring patient and health care purchaser interests. His 2009 testimony to an HHS panel resulted in the revocation of an industry group’s monopoly on Health Information Technology certification. In 2010-2013, he spearheaded a national effort, culminating in a lawsuit against CMS and HHS, to expose the AMA’s RBRVS Update Committee’s role in distorting US’ care and cost patterns.

Brian is a regular contributor to the health care trade press. He is a reviewer for the journals Health Affairs and The Journal of Ambulatory Care Management, and an advisor to several health care organizations. He is the Founder and Moderator of The Healthcare Benefits Hackers listserv, a vibrant discussion forum with 850+ participants focused on health care value and high performance. George Washington University’s Masters in Health Administration Program ranked Brian's writing, archived at Care & Cost, the top 2016 blog by a health care professional. Feedspot named it a 2017 top 100 health care blog.

In his spare time, Brian is an offshore sailor.

John F. Rodis, M.D., M.B.A., is the founder and president of Arista Health, LLC, driving quality, safety, and patient experience and reduce risk in hospitals and health systems. He served as president of Saint Francis Hospital from 2015-2020, the eighth leader of Saint Francis and the first physician to serve as president since its founding in 1897. Dr. Rodis previously served as Saint Francis’ Executive Vice President and Chief Operating Officer, Chief Physician Executive. Prior to his executive leadership roles, Dr. Rodis served as Chairman of the Department of Obstetrics and Gynecology and Physician Leader of the Women and Infants Service Line, a position he assumed in 2011.

Under Dr. Rodis’ leadership, Saint Francis, a 617-bed major teaching hospital, the largest Catholic hospital in New England, earned its Level 1 Trauma Designation, opened its Smilow Cancer Hospital at Saint Francis and the Karl J. Krapek Comprehensive Women’s Health Center. During his tenure as president, the hospital garnered numerous awards and recognition including the 2018 and 2019 Women’s Choice Award® as one of America’s 100 Best Hospitals for Patient Experience, was named as one of the nation’s 100 Top Hospitals by IBM Watson Health™ and one of the World’s 1000 Best Hospitals by Newsweek. Moreover, the hospital recently attained its fourth consecutive “A” for Patient Safety from the Leapfrog Group, its seventh A in the last four years.

Before joining Saint Francis, Dr. Rodis served as Senior Vice President for Medical Affairs and Chief Medical Officer at Stamford Hospital, where he also previously held the position of Chairman of the Department of Obstetrics and Gynecology. Prior to that, he was at the University of Connecticut Health Center, where he was the Obstetrics and Gynecology Residency Program Director, a member of the Division of Maternal-Fetal Medicine and Director of Perinatal Genetics.

Dr. Rodis received his medical degree from the Autonomous University of Guadalajara, Guadalajara, Mexico. He completed his residency in obstetrics and gynecology at St. Joseph’s Hospital and Medical Center, Paterson, NJ. He completed fellowships in Maternal-Fetal Medicine and Clinical Genetics at the University of Connecticut Health Center. He also received his Master of Business Administration from Rensselaer Polytechnic Institute.

He is the author or co-author of over 100 papers published in peer-reviewed professional journals. He served as an oral examiner for the American Board of Obstetrics and Gynecology (ABOG) for 19 years. He served as Chairman of the Connecticut Hospital Association’s Quality Committee and was a member of its Executive Committee and Board of Directors. He currently serves on the Board of Trustees of the University of Saint Joseph. He was awarded the 2020 Regent’s Senior Careerist Award by the Connecticut Association of Healthcare Executives.