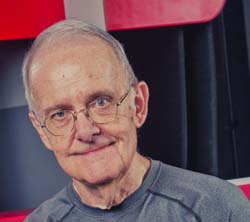 is an author and documentary film producer who inspires older adults to adopt healthier lifestyle habits.

After a successful 35-year Wall Street career, he shifted gears to offer a fresh perspective on issues close to his heart. His 2004 book, Cowboy Ethics, a best-seller with more than 150,000 copies in circulation, and two follow-up volumes, Cowboy Values and The Try, shined a light on the importance of shared values and personal character in our society. They also spawned a grassroots movement and organizational partnerships that have touched tens of thousands of students, business people, and families.

In 2010, Jim turned his attention to a public health issue that sooner or later affects us all. His goal is to change the way we think about aging. He especially wants to dispel the myth that we have no control over the aging process.

This “third act” in his career was spurred by his personal journey of transformation. As a 70-year-old “couch potato,” Jim resolved to do whatever it took to become fit and ease his excruciating chronic back pain. He began researching fitness and exploring approaches to successful aging. Within four years, his back pain had disappeared and he was in the best shape of his life.

Alarmed by the prevalence of serious chronic diseases among older Americans, Jim launched an ongoing public outreach campaign on the issue. He also wrote Just Move!, A New Approach to Fitness after 50 which was published by National Geographic. It was chosen by the Wall Street Journal as one of 2017’s top five books on healthy aging.

Most recently he has produced a half-hour documentary film, The Art of Aging Well, which is being aired on PBS stations across the nation. It can also be streamed from his website, theartofagingwell.com.

He is also a Fitness Ambassador at the Vi Living community in La Jolla, California. At the age of 80, Jim continues striving to fill what he calls “the inspiration gap” on the subject of aging. "For years, we’ve been telling people that if they exercise and eat right, they can lower their risks of heart attack, stroke, cancer, or Alzheimer’s", he says. "But information isn’t enough. We can’t argue or browbeat people into taking care of themselves; we have to motivate and inspire them. That has become my purpose in life."

Jim holds a bachelor’s degree from Regis University. He resides in the San Diego area with his wife of 52 years and favorite workout partner, Stanya. His story has been featured on The Today Show and his writing and insights have been shared in publications including Muscle & Fitness, Thrive Global, AARP, Next Avenue, Healthline, Reader’s Digest, and many more.