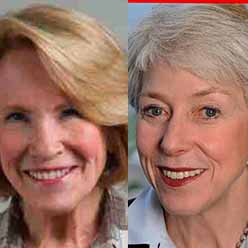 Dr. Molly Coye is Executive in Residence at AVIA, the leading network for health systems seeking to transform through the deployment of digital solutions. She is also an executive sponsor for the Medicaid Transformation Project that focuses on scalable solutions to address the needs of vulnerable populations. Dr. Coye also advises national and international governments, health systems, and policymakers about disruptive technologies and business models.

Dr. Coye is an elected member of the National Academy of Medicine (formerly the Institute of Medicine). She also serves on the Founder’s Council of United States of Care. She is currently a member of the Board of Directors of Amedisys (AMED), Ginger, and ConsejoSano, as well as HealthTech4Medicaid, a nonprofit established to advance digital solutions for underserved populations.

From 2005-2018, Dr. Coye was a member of the board of directors of Aetna, Inc, where she served on the Executive Committee and Investment and Finance Committee and chaired the Medical Affairs Committee. From 2010 – 2015, Dr. Coye was the Chief Innovation Officer for UCLA Health where she led the health system in identifying new strategies, technologies, products, and services. From 2001 to the present, Dr. Coye has also served as an advisor to three venture investment firms,. She is on the advisory board of more than a dozen venture-backed young companies developing digital health services.

Christine K. Cassel is an internist and geriatrician, Senior Advisor for Strategy and Policy in the Department of Medicine at UCSF, where she is working on biomedical ethics and the role of technology in health care including the use of patient data in big data applications such as artificial intelligence.

Dr. Cassel was one of 20 scientists serving President Obama on the President's Council of Advisors on Science and Technology (PCAST). She is a leading expert in geriatrics and policy for an aging society, in bioethics, and in professional standards and quality of care.

Among her many professional achievements and honors, Dr. Cassel was elected to membership of the National Academy of Medicine in 1992. She was the first woman to be President of the American College of Physicians and, subsequently, first woman Chair of the American Board of Internal Medicine. She has served as Chair of the Board of the Greenwall Foundation, a national foundation for bioethics, was the President of the American Federation for Aging Research; and was a member of the Advisory Committee to the Director at the National Institutes of Health

She currently advises a number of start-up companies using information science to advance healthcare quality. She has received numerous honorary degrees and is a Fellow of the Royal Colleges of Medicine of the U.K. and Canada. She is author of over 200 articles and author or editor of 11 books, including one of the leading textbooks in geriatric medicine, and Medicare Matters: What Geriatric Medicine Can Teach American Health Care.