Apparently Nobody in Healthcare Trusts Each Other 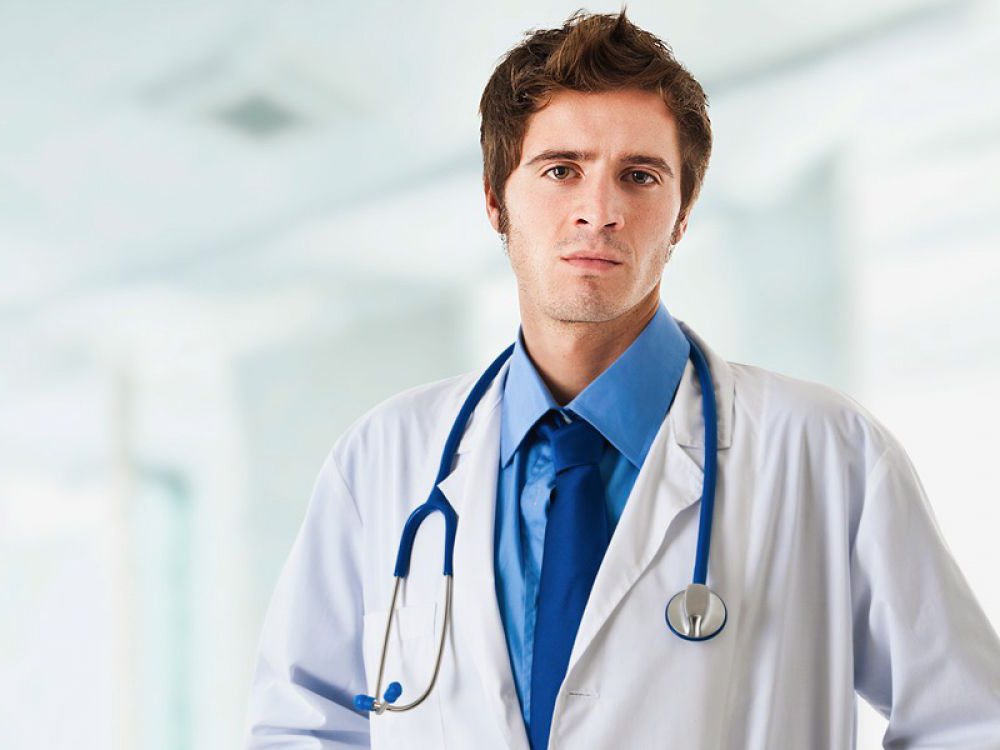 When it comes to healthcare, apparently there’s no trust anywhere. This sad conclusion is based on the results of a survey published by ReviveHealth, a full service agency focused on healthcare delivery, finance, and innovation. ReviveHealth partnered with SMG Catalyst Healthcare Research to survey hospital and health system executives (n=117), practicing physicians (n=600), health plan executives (n=48), and consumers (n=604). This is the 11th year ReviveHealth has been doing such surveys, but the first year in which consumers were included in the process.

Survey participants were asked, via online web surveys, to indicate their level of agreement on an answer scale (below) with statements that reflect their feelings in each of three domains: reliability, honesty, and fairness. 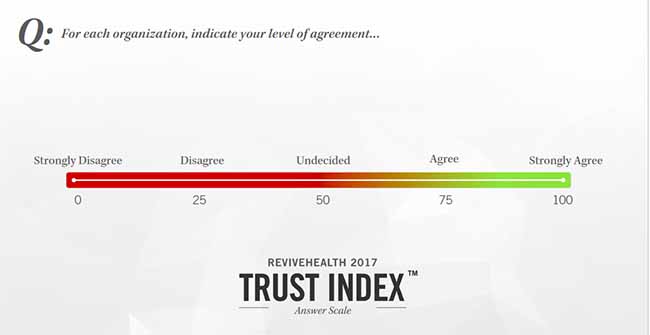 1. Reliability – This organization makes every effort to honor its commitments.

2. Honesty – This organization is accurate and honest in representing itself and its intentions.

3. Fairness – This organization balances its interests with ours and doesn’t routinely take advantage of us.

Participating health systems executives and physicians rated each of the 5 major health plans: Aetna, Anthem, Cigna, Humana, and United. The results for the various Blues plans were presented as an aggregate score.

Composite scores were calculated as an equally-weighted mean of all three individual Trust measures. The surveys were all filled out between June 6 and August 11, 2017

How do industry stakeholders feel about each other? 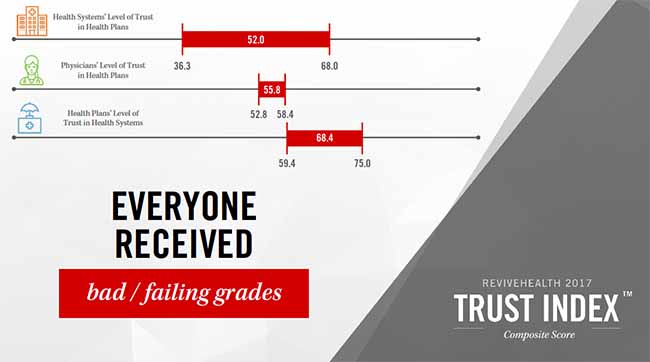 Drilling down on the data, they found that hospitals’ and health systems’ level of trust in the various health plans had a widespread. UnitedHealth was rated the lowest (36.3) as it has every year for the 11 years the survey results have been reported. Cigna captured the highest score (68.0) this year by a narrow margin, but Brandon Edwards, the CEO of ReviveHealth, told me that for the last five years, Cigna and Aetna have been alternating the number 1 and number 2 slots. The average score of 52.0 reflects the mean of the remaining four plans. According to Dan Prince, the President of Catalyst, the participating hospital system executives were individuals who were responsible for negotiating contracts, so they had first-hand knowledge of the issues related to health plan-health system contracting.

The spread for physicians’ level of trust in health plans, on the other hand, was much narrower with a low of 52.8, a high of 58.4, and an average of 55.8. Brandon Edwards thinks this is because physicians, by and large, are not involved in the business side of their practices, so their responses may reflect what they have heard from staff and their patients.

Health plans were asked to rate health systems by category (e.g., for-profit hospital systems, non-profit systems, Children’s hospitals, and so forth). By and large, their level of trust in such systems ranged from a low of 59.4 to a high of 75 with an average of 68.4. Brandon told me health systems tended to rate systems with lesser degrees of power higher. Based on my experiences working with health plans, that rating makes sense. In healthcare, negotiating is all about who has leverage. A small hospital in a multi-hospital community wants the health plan’s business and will do what it takes to get it. A large system or a system that is the only game in town, on the other hand, will use their leverage in ways that can make life difficult for health plans (e.g., refusing to let nurses have access to hospitalized patients, not allowing concurrent review, and so forth).

The authors of the study concluded, rightfully, that no one was really a winner because everyone received bad or failing grades.

What did industry participants have to say?

In addition to survey responses, the authors of the study shared the comments from each of the stakeholders. Here is a representative sample of what health system executives had to say about health plans:

“‘Good faith’ and ‘trust’ have significantly eroded with some payers. It is evident that …there is no intent by the payer to honor the terms put into place.”

“We have noticed greater frequency of [insurance] companies implementing policies in conflict with contract terms, then not honoring the terms of the agreement.”

“There’s very little commitment to the concept of ‘win-win.’ Payors that have market power will exercise it to their own advantage, exclusively.”

Health plan executives, on the other hand, had this to say:

“Not all organizations are really committed to doing the right thing, without using monetary gain as their first motivation—very few really are interested in people’s well-being.”

“Economic pressures on both sides of the equation have resulted in relationship erosion. In public, health system executives will vocalize strong support for integrated health, quality, and transparency, but at the negotiation table, this completely evaporates…there is often little regard for members/patients and [their] costs…”

The transition from volume to value

Health plan and health system executives were also asked about the transition from volume-based payments to paying for value, something we desperately need to get done if we are ever going to tame costs and improve outcomes. In answer to a question about where they are at on this issue in 2017, here is what they said: 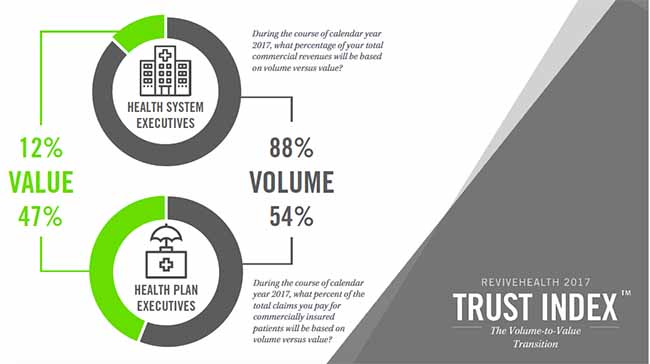 Health systems think they are about half of the way to a value-based system, but their providers, the health systems are still getting their revenue from volume, the old “heads in beds” model. At first glance, it may be hard to understand how health plans think they are doing so well when the people they pay are saying they are still primarily getting paid by the piece. It is likely that the explanation lies in how each of the stakeholders views the transition to value-based care.

In a very interesting series of graphics, you can see that the driving forces to transition to value are very different for health plans compared to health systems. The strongest drivers for health plan executives are gaining a competitive edge, increasing trust with partners, being able to participate in government initiatives, and gaining support in the physician community. They feel hindered by lack of data, technologies, and processes. 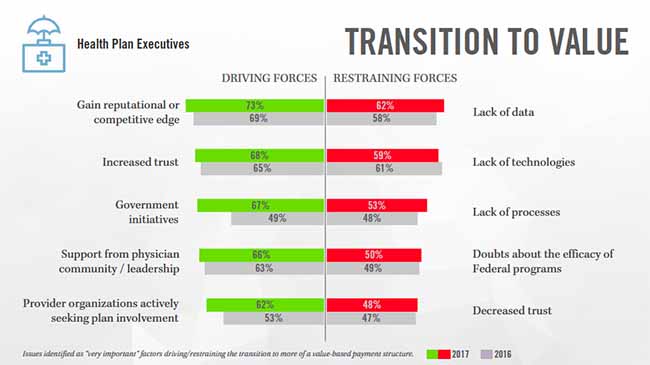 Health system executives rank support from physician and community leadership as the strongest driver followed by a gain in reputational or competitive advantage. Restraining them is caution by their leadership to take a risk or move too quickly as well as a lack of technologies and processes. 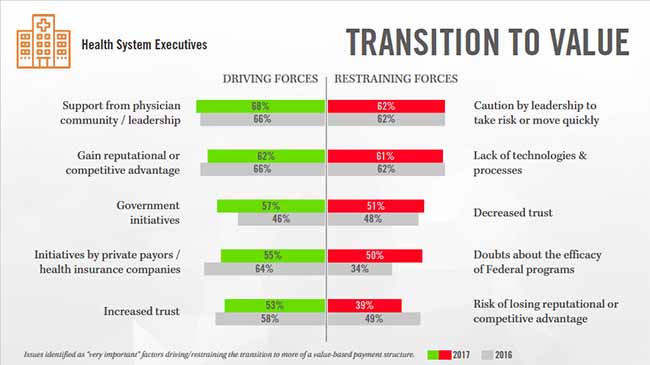 “No matter how you look at it, trust is an important factor as the healthcare tries to transition from volume to value.”

What about the real customer?

The future of healthcare

Consumers were also asked about the future of healthcare and these answers were really interesting. Remember, people were answering the questions between June 6 and Aug 11, 2017, well before the latest round of Repeal and Replace known as Graham-Cassidy failed in the Senate. 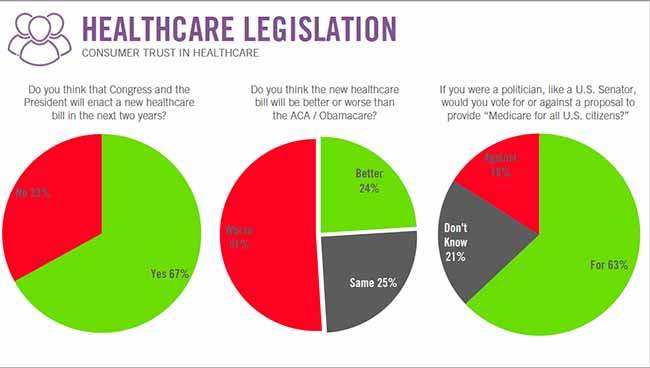 In retrospect, we can see that they were wrong about the first question, partially right on the second, and hopefully prescient on the third. When I asked Brandon Edwards what he thought about the very positive response to Medicare for all, he cautioned that there was a slight skew towards Democrats in the consumer group, but he said that despite that,

“Something has really changed here and I think this is why: My personal experience with private plans has been a disaster. My parents’ experience with their Medicare plan, on the other hand, has been very positive because Medicare is a program that is easy to navigate and clearly understandable.”

Maybe we are finally ready to do the right thing after trying everything else and failing.