As we grapple with the scientific challenges of discovering therapies to prevent or slow Alzheimer’s disease, we are faced with other, related challenges. How do the physiological hallmarks of the disease – like the buildup of the proteins beta-amyloid and tau – influence the lived experience? Are there experiential features of the disease for which we have not identified biomarkers? Why are the brains of distinct demographic groups differentially affected by Alzheimer’s disease, and what are the implications for treatment and care?

UsAgainstAlzheimer’s has launched and incubated an extensive suite of initiatives that include traditional approaches to Alzheimer’s disease that promote basic, clinical, and translational research to broaden our understanding of disease mechanisms and how therapeutic agents can be used to intervene in disease processes. However, other initiatives allow the organization to more directly engage families wrestling with all stages of Alzheimer’s disease and each of its complex components. The goal with these latter efforts is to improve quality of life for those with Alzheimer’s disease and their families while science pursues breakthroughs to prevent or slow the disease itself. The foundational assets UsAgainstAlzheimer’s is building as part of these programs should also be valuable to other organizations addressing Alzheimer’s disease.

The A-List and the “What Matters Most” study

One of these key initiatives is Alzheimer’s Disease Patient and Caregiver Engagement (AD PACE), which will leverage a major asset called the the A-List. The goal of AD PACE is to identify and incorporate into therapeutic development the patient and caregiver perspective on Alzheimer’s disease. Through its Institutional Review Board (IRB)-approved What Matters Most study, AD PACE will qualitatively identify what it is that matters to those living with the disease and then use quantitative analyses to rank the relative importance of what study participants value. These results then can inform treatment development strategies to address those disease elements most significant to people facing Alzheimer’s.

The A-List is a growing online community of nearly 6,000 people living with Alzheimer’s disease, other forms of dementia, or mild cognitive impairment (MCI), their caregivers, and those at elevated risk for developing dementia. An invaluable tool to collect profound data on what it is like to experience Alzheimer’s disease, the A-List already has been used to conduct surveys that shed light on how people facing dementia view specific aspects of their conditions. 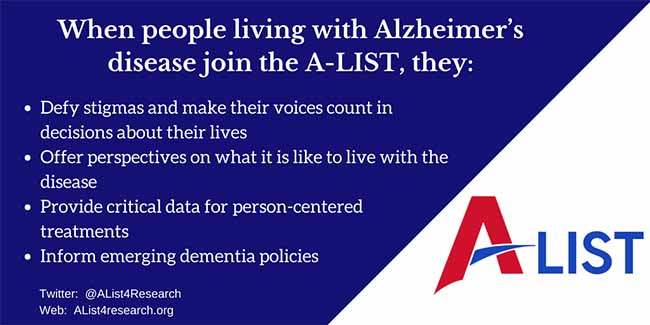 While the A-List can and has been used to address specific questions related to the lived experience of Alzheimer’s disease and other forms of dementia, it also is well-poised to inform interconnected issues of patient-focused drug development (PFDD), clinical trial design, and value models for payment and coverage. The U.S. Food and Drug Administration (FDA) has adopted a PFDD model based on the recognition that patient insights are essential for the development of medical products and devices that are not only safe and effective from a clinical perspective but also in ways that patients find meaningful and valuable. Data amassed through the A-List could contribute to regulatory efforts to account for patient perspectives. These data could, for instance, inform future versions of FDA guidance on drug development for Alzheimer’s disease – guidance that has been recently updated to account for the opportunities that drugs that affect earlier stages of the disease could offer those living with the disease.

A-List studies also could help inform strategies to improve recruitment and retention of clinical trial participants, which is essential to accelerating the scientific enterprise. A 2018 A-List study identified difficulties in finding trials and lack of information on trials as top logistical barriers limiting volunteerism; further A-List data could be used to develop more effective strategies to overcome these barriers and tailor clinical trial recruitment to achieve heretofore elusive socio-economically representative trial cohorts. Recent survey data have shown that people with a dementia diagnosis are more willing to participate in clinical trials than those with MCI and those who are cognitively unimpaired. Information collected through the A-List could help determine how to incentivize people without a diagnosis or at prodromal stages of the disease to join clinical trials.

Healthcare aligned with values and preferences

As healthcare delivery models shift toward value-based care, patient and caregiver preferences and health outcomes have become more critical than ever in shaping the way public and private payers evaluate healthcare services. Though efforts like the A-List, meaningful health outcomes may be more precisely defined, which could influence coverage and reimbursement.

Until Alzheimer’s disease is eradicated, we have a moral and ethical responsibility to offer people living with dementia the highest possible quality of care that is most aligned with their values and preferences. Unlike many other diseases, those living with Alzheimer’s eventually lose their ability to assess and communicate their wishes, so it is important to capture these insights at their earliest opportunity and with the greatest achievable degree of precision. Just as the science should bear the greatest available fidelity to the wants and needs of people living with Alzheimer’s disease, the A-List will help provide similar fidelity in care and quality of life decisions.

In addition to helping shed light for researchers, payors and policy-makers on how Alzheimer’s disease affects those living with the disease and their caregivers, the A-LIST creates natural opportunities to recruit survey respondents themselves as clinical trial volunteers, grassroots policy advocates, and public educators to destigmatize the lived experience while also debunking several harmful stereotypes and myths. Already, other research groups are partnering with UsAgainstAlzheimer’s to conduct their own research using the A-List, and A-List members are eagerly partaking. These members are also finding opportunities to educate and advocate on behalf of those living with Alzheimer’s disease.

Please join us in encouraging people living with or at elevated risk of Alzheimer’s disease and other forms of dementia to elevate their voices by joining the A-List here.

Ian Kremer is Executive Director of the LEAD Coalition (Leaders Engaged on Alzheimer’s Disease), unifying more than 100 local, state, national, and multinational organizations committed to stopping Alzheimer’s disease and other forms of dementia, including vascular and Lewy body dementia and frontotemporal degeneration. The coalition works collaboratively to focus the nation’s strategic attention on accelerating transformational progress in quality of life for persons living with dementia and their caregivers; detection and diagnosis; and research leading to prevention, effective treatment, and eventual cures. Kremer, who has worked in dementia policy since 1996, earned his undergraduate degree from Washington University in St. Louis and his law degree from the University of Michigan. Meryl Comer is a Board Member of UsAgainstAlzheimer’s and President/ CEO of Geoffrey Beene Foundation Alzheimer's Initiative, which promotes early diagnosis, virtual innovation challenges and m-health technologies. A founding partner of The Global Alliance on Women’s Brain Health and co-founder of Women Against Alzheimer’s, she serves on the NIH National Advisory Council on Aging(NACA). In 2012, she led the formation of the 21st Century BrainTrust® (21CBT), a non-profit partnership to advance mobile health technologies and brain health. Comer is also co-principal investigator for the PCORI Alzheimer's Patient/Caregiver Research Network in partnership with the Mayo Clinic, UCSF's Brain Health Registry, and USAgainstAlzheimer's Networks.  In 2009, she served on the bi-partisan Alzheimer's Study Group, charged with presenting a National Strategic Plan to Congress. A former veteran broadcast journalist, Comer’s New York Times and Washington Post bestseller, Slow Dancing with a Stranger (HarperCollins) supports Alzheimer’s research. Recent Awards include 2018 Catalyst Award – Women’s Brain Health Initiative, 2016 BrightFocus Public Advocacy Award, 2015 Alzheimer Drug Discovery Foundation “Great Ladies” Award, 2015 International Book Award, New York Times Best Seller, 2014 Wertheim Global Medical Leadership Award (FIU).